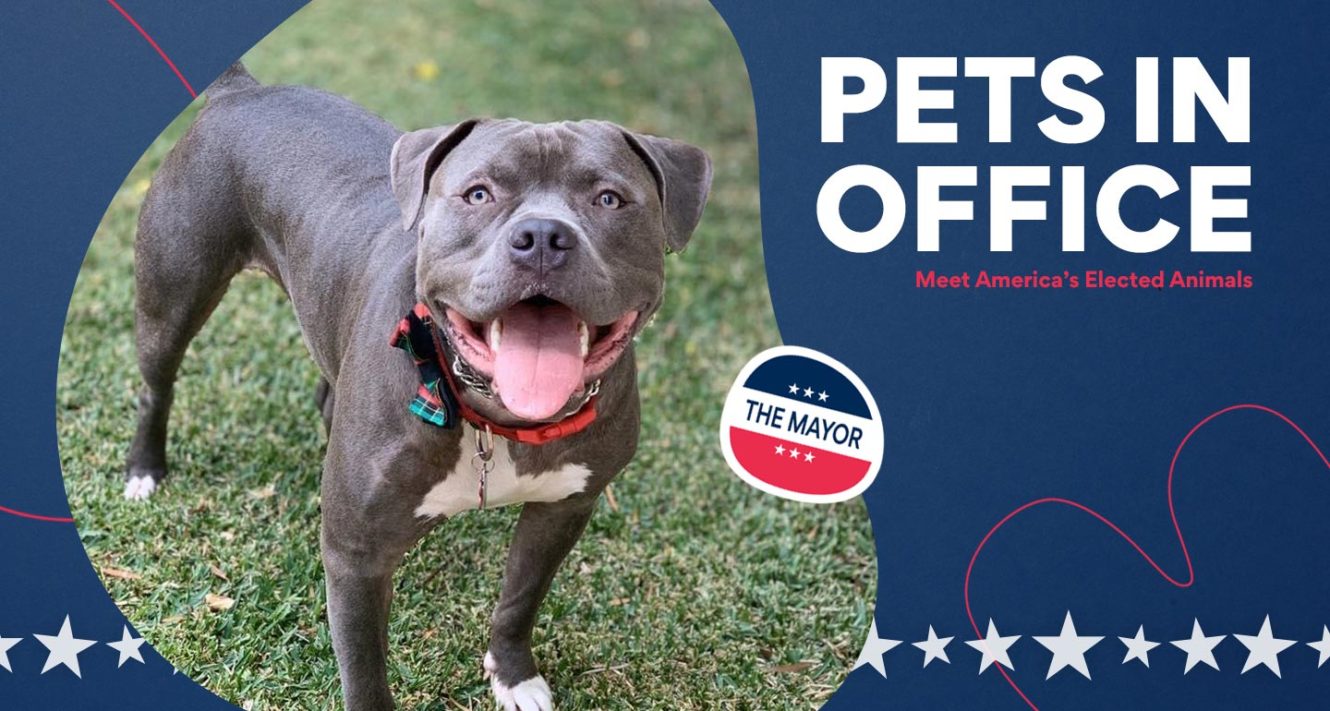 Photo courtesy of PAWS of Coronado

Mayor Brynneth Pawltro of Rabbit Hash, Kentucky, isn’t sweating her November reelection. When asked whether she was worried about the large pool of candidates running against her, Pawltro’s representative Jodie Bamforth said the local leader is unfazed.

“I’m looking at her right now and she’s wagging her tail,” Bamforth says. “So, I would say probably not.”

The 7-year-old Pit Bull was elected to a four-year term in 2016, and she’s the latest in a long line of dog mayors who have been elected in Rabbit Hash for over two decades. And while having a dog mayor may sound odd, Rabbit Hash is not alone. From Stubbs, the kitten mayor of Talkeetna, Alaska, to Ioiô, a billy goat who served on the city council of Fortaleza, Brazil, domestic animals have been elected to local offices across the globe for the better part of the past century. 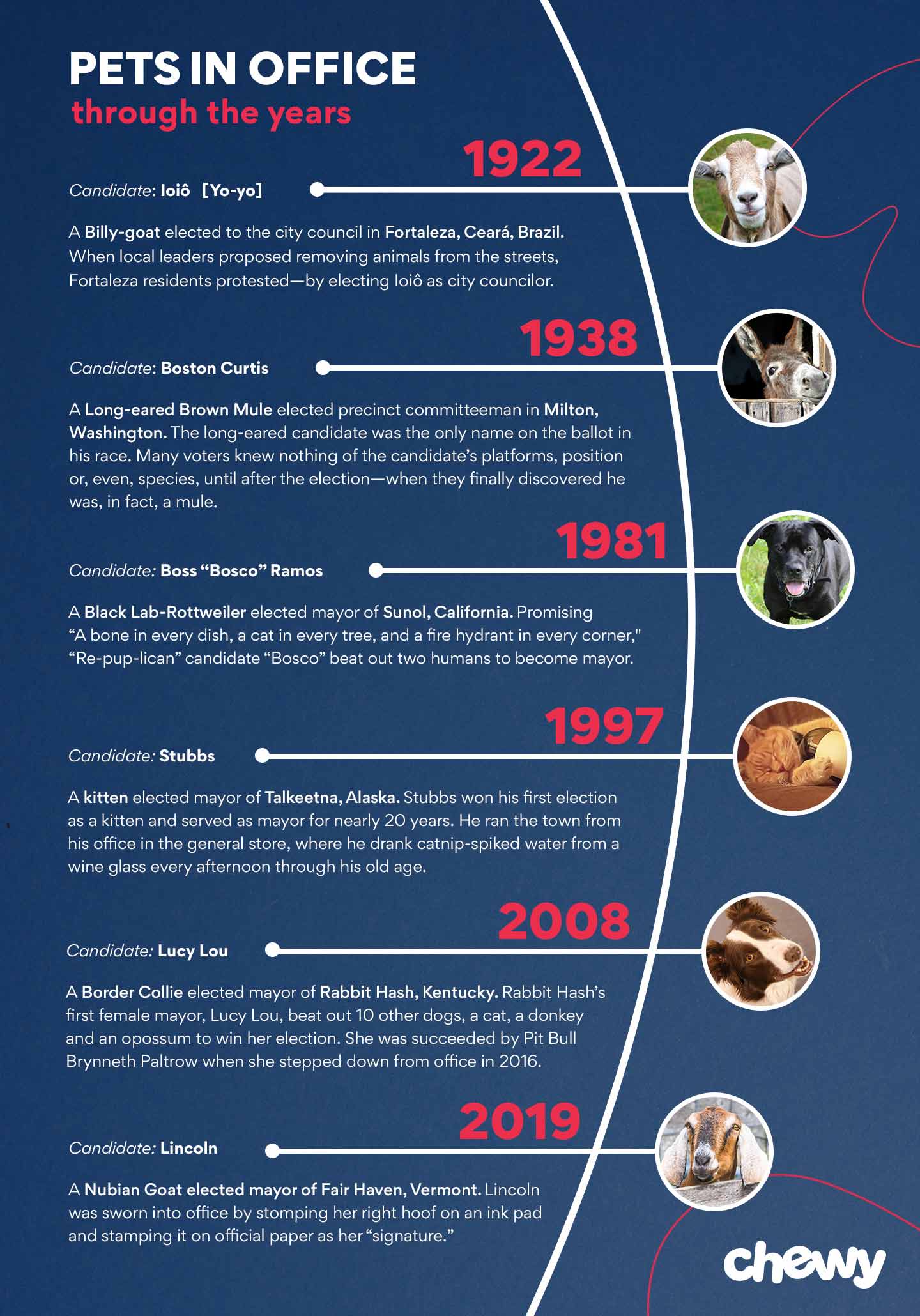 In some cases, animals have actually beaten out human candidates for office. But in modern times, these “elections” more often serve as fundraisers for local organizations, shelters and rescues. For these pets, titles like “mayor” are more honorary than serious, and in some cases their towns also have human representatives who carry out the duties of their office. Still, there’s no contesting that these animals are the cutest elected officials around!

Pawltro, who ran with a slogan of “Peace, Love, and Brynn” to counter 2016’s contentious presidential election, raised significant funds for the Rabbit Hash Historical Society in her race. Each vote in the election cost $1, and Pawltrow tallied over 3,000 of them, beating her other contenders—including Stella the cat, Bossy the chicken and a donkey named Higgins—by 500 to 1,000 votes.

Bamforth, who is Pawltro’s pet parent as well as her political spokesperson, says she never expected her dog to be elected mayor—she thought of Pawltro as, well, an underdog. But Pawltro’s understanding and accepting platform earned a wide range of support, even winning over one local resident who was not a fan of Pawltro at first. “My grandma used to call [Pawltro] the ugliest puppy she’s ever seen, but she now thinks Brynn is the most darling thing ever,” Bamforth says. “That was the most important vote for me.”

During her tenure, Pawltro has represented the citizens of Rabbit Hash at several weddings and a trash cleanup on the Ohio Riverbank. Bamforth has also set her up for a photo booth in front of the Historic General Store, where folks could get a Polaroid with the dog mayor during the annual Old Timers Day Festival each August. Pawltro regularly greets visitors and serves as a good face and advocate for the town—as well as her entire breed. She has proven that “a Pit Bull is adequate to run as a government official and she can be loving and understanding to everyone she comes across,” Bamforth says. 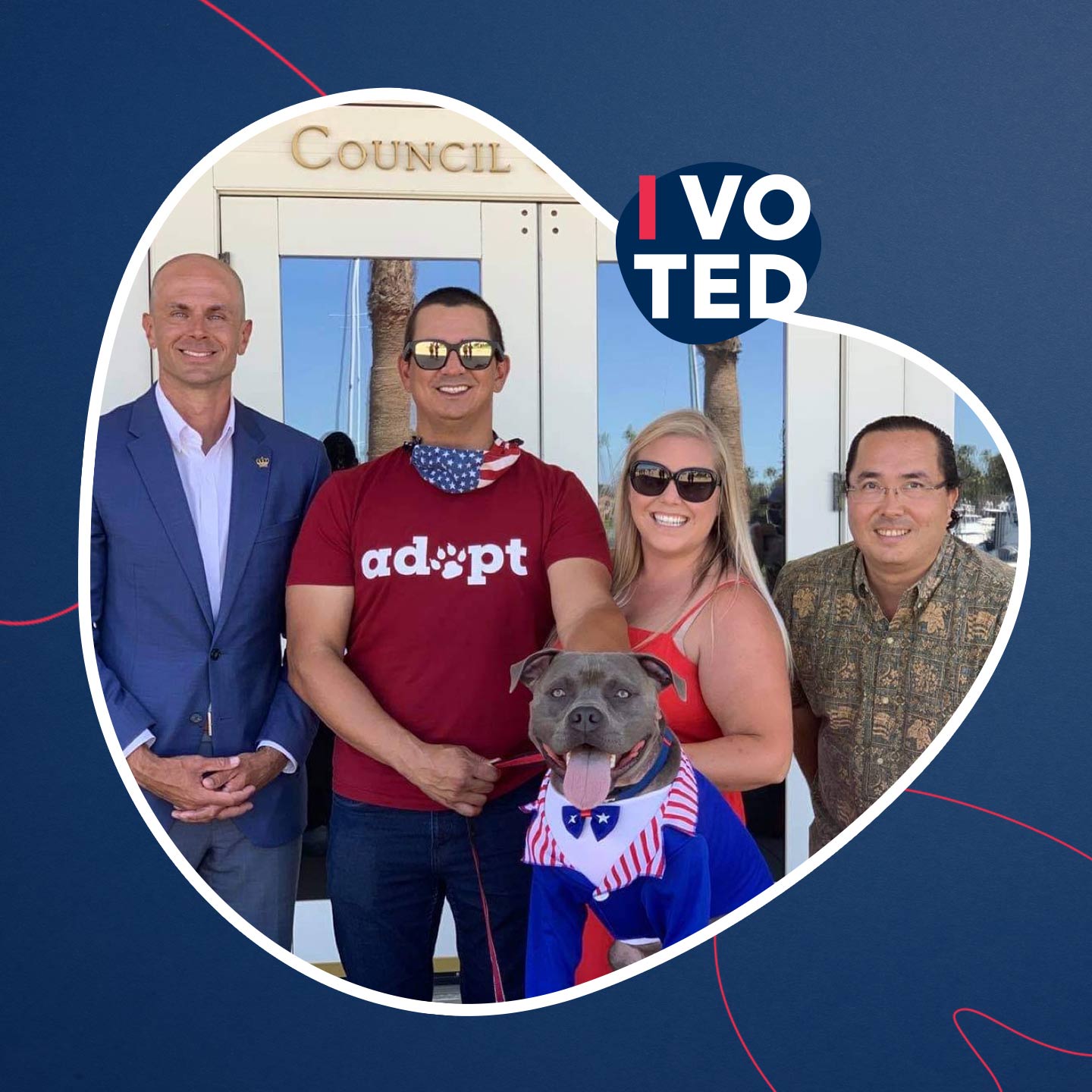 Coronado dog mayor Hudson at his inauguration. Photo courtesy of PAWS of Coronado

Pawltro’s not the only political pup in the country. This past June, Hudson, a 1-year-old blue Pit Bull, was inaugurated as dog mayor of Coronado, California, after raising $4,235 ($1 per vote) for San Diego-based pet rescue PAWS of Coronado. According to his slogan, Hudson is “proud to represent Coronado and America, and will provide hugs and kisses to all.”

It started as a close race between 13 canine candidates, but Hudson’s campaign picked up steam after his parents made campaign T-shirts featuring his gregarious smile and began wearing them all over town. In the end, Hudson beat Julep, a Terrier mix, by just 152 votes. Apparently, Hudson’s simple “hugs and kisses” slogan gained more traction than Julep’s promises of “free bourbon for all owners, free treats for all pups, hour-long dog walks daily, beach visits and no baths or trips to the vet.”

Since the race was so close, Julep earned the role of vice mayor. It’s been said she works well with Hudson and all of the other candidates who earned spots on Coronado’s canine city council. In total, the election raised nearly $17,000 for PAWS of Coronado.

Having the pups in office has improved city politics, according to Mikaela Boudreau, operations manager for PAWS of Coronado. In fact, the notoriously friendly Hudson has even reached out to other four-legged city leaders for advice. “Hudson has made friends with Mayor Max II of Idyllwild, [California],” says Boudreau, referring to the Golden Retriever appointed to office by Idyllwild Animal Rescue Friends after his predecessor passed away. “They’re planning to get together to meet.” 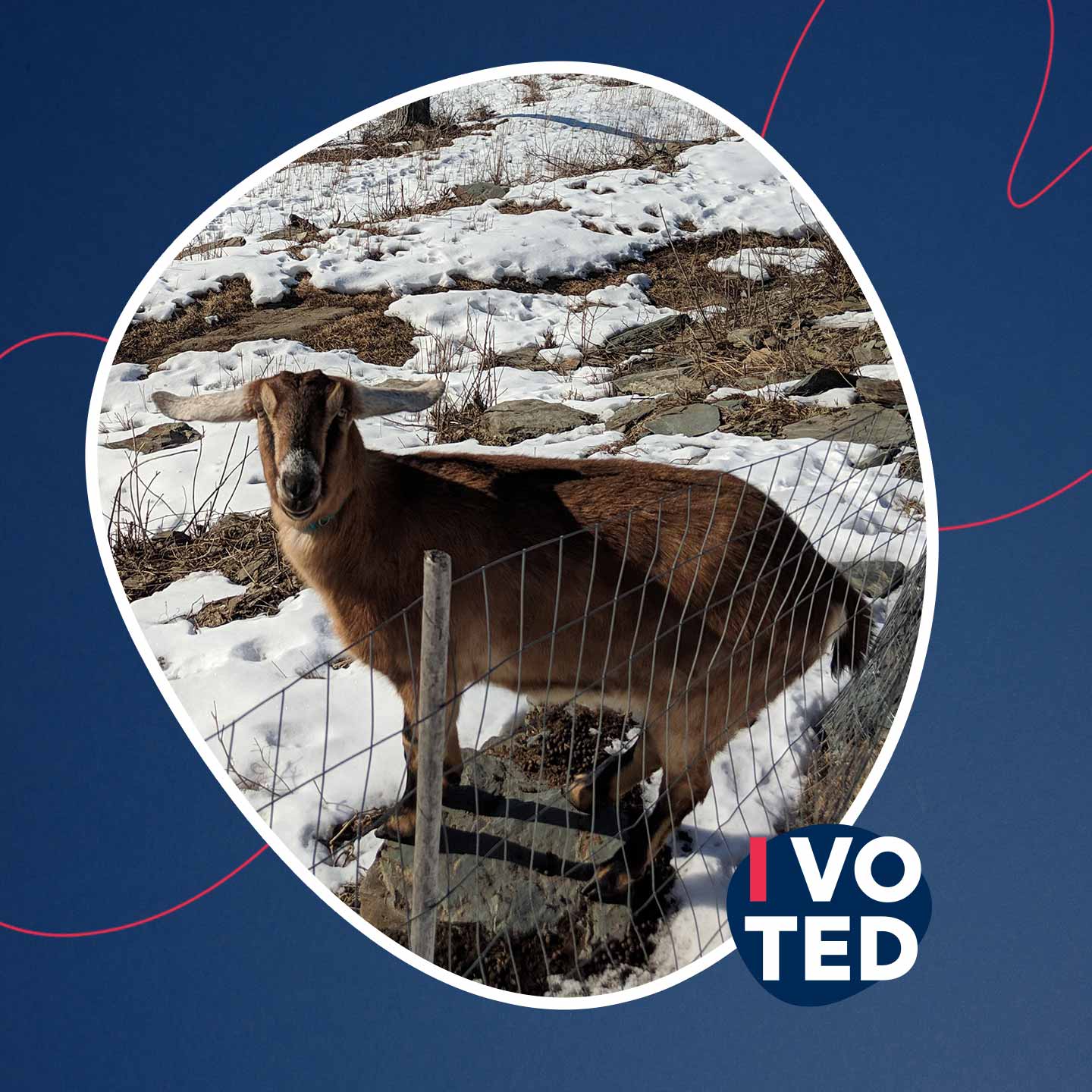 On the other side of the country, the town of Fair Haven, Vermont, elected its first mayor, animal or otherwise, last year: a 3-year-old Nubian goat named Lincoln. (A town manager and five-member selectboard carry out the duties of local government.) Lincoln’s down-to-earth, feel-good campaign clinched her the election, which raised funds for a school playground. Her simple slogan? “She’s a good goat.”

Lincoln served with pride throughout the last year, says Fair Haven Town Manager Joe Gunter. And she certainly made her inauguration a memorable one. She signed her paperwork with a stamp of her hoof, then, as her first official act as mayor, left a mess on the floor of the town office. (Her constituents joked that it was a fitting move for a politician.)

In March, Lincoln ran for reelection. But despite her strong support, approachability and willingness to take carrots from constituents, she was edged out by a 3-year-old therapy dog. In fact, Murfee, a King Charles Cavalier Spaniel, beat out 19 other animals on the ballot, including a horse, besting Lincoln by a slim 25 votes. The election drew 664 voters, including 300 school children bussed in from the local elementary school. 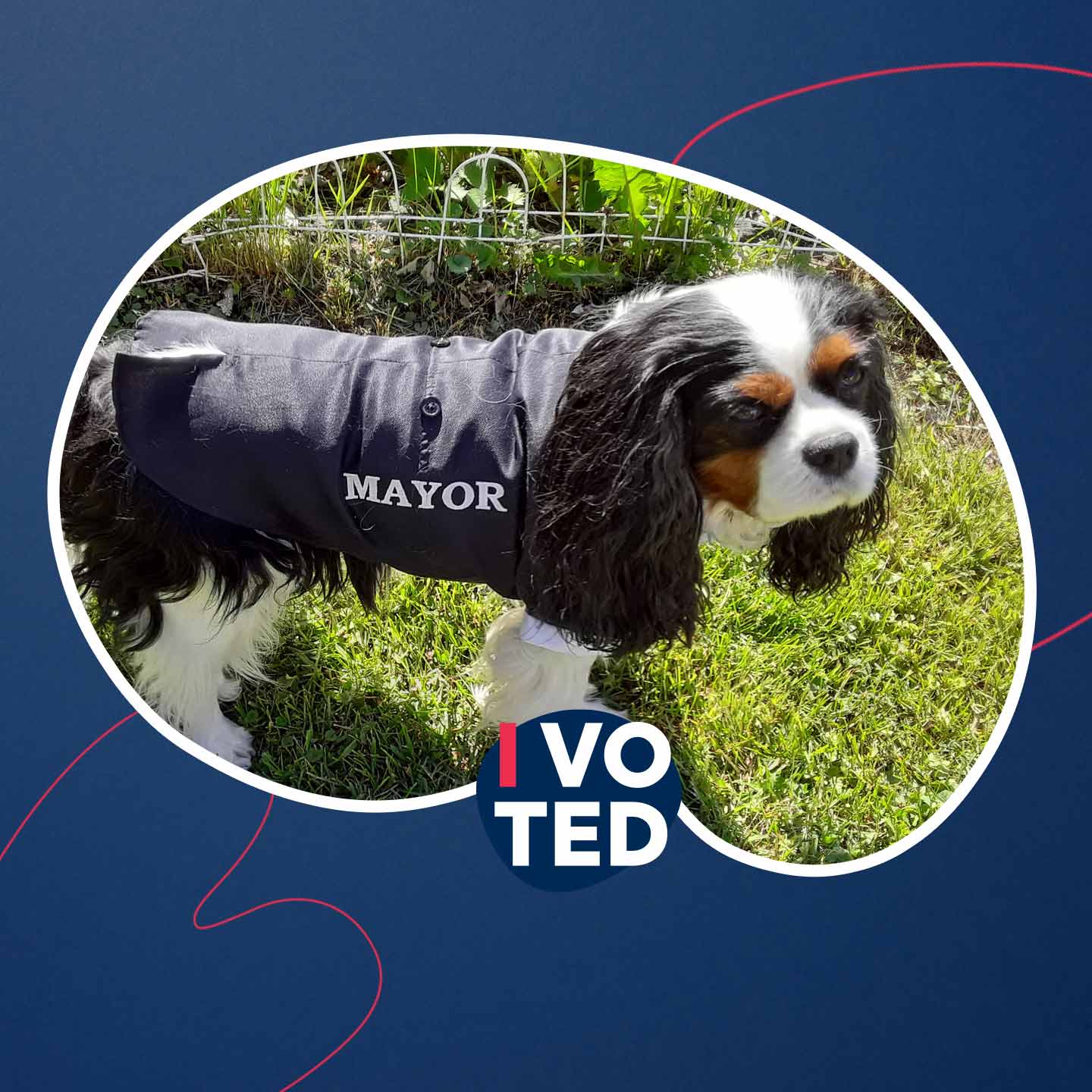 Murfee, the dog who succeeded Lincoln as mayor of Fair Haven. Photo courtesy of Joe Gunter

Lincoln’s taking it in stride, Gunter says. She seems to be enjoying retirement, which she’s mainly spending on a scenic hillside eating lots of grass.

“Lincoln had a strong base,” says Gunter. “It was just time for a change, and I think people were ready for a dog in office.”

This election season, if human politics is getting you down, don’t give up hope. Instead, consider fielding a feline or campaigning for a canine! Check with your local government offices for rules and regulations, and keep your eye on animal elections in places like Rabbit Hash and Coronado across the country. And remember: These pets earned their titles by raising money for good causes, so even if there’s no dog mayor in your own town, you can still make your voice heard by donating to your local shelter or rescue—it’s a guaranteed win. 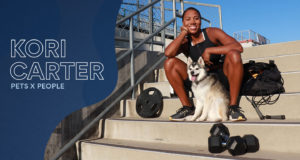 With Her Dog By Her Side, World Champion Kori Carter Clears Hurdles On and Off the Track
Kori Carter is a champion hurdler, a record-breaking racer, a Tokyo 2021 Olympic hopeful—and a devoted pet parent. Find out how her dog Kovu helps her reach her goals.
Up Next 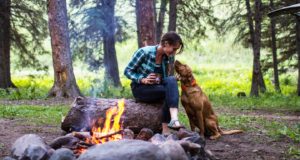 15 Dog-Friendly Campgrounds for Happy (and Furry) Campers
Take your pup camping at one of the best dog-friendly campgrounds in the U.S. for an overnight adventure that you both will love.