Chef and Pet Parent Bobby Flay Has Definitely Turned Down Plans to Stay at Home...

Bobby Flay has a ton of important jobs: chef, restauranteur, media personality and beyond. But the one closest to his heart just might be cat dad.

Flay’s the pet parent to two cats, Nacho, his Instagram-famous Orange Maine Coon, and Stella, his sister. But cats have been in his family since childhood. Flay grew up in a household that, at any given time, had two or three felines, he says—and as an only child, he considered them his siblings.

“The most significant cat to me was a big orange tabby named Pumpkin who we had for 16 years,” he says. “And my mom also had Siamese and Birmans. We always had cats.” It’s no wonder, then, that in 2014 he named one of his restaurants Gato, the Spanish word for “cat.”

“I always say that I was raised by cats,” Flay says.

But as his career in food started to take off and he found himself traveling, Flay took a break from having pets. “I was just never home,” he says. Still, he missed having a furry feline to greet him at the end of the day. So, in 2015, he added Nacho to his family—and the cat’s Instagram following took off almost immediately, thanks to his affectionate, dog-like personality and photogenic nature.

“He likes to party,” Flay says, affectionately describing Nacho. “He always wants to be involved. He’s the Alpha.” (Flay says that Nacho is only somewhat aware of his online fame, especially when friends come over and fawn. Mostly he just wants treats.)

Then, in 2019, along came Stella. Flay thought the two would balance each other out nicely, and thankfully, it worked. “She thinks he walks on water,” Flay says. “He’ll go scratch a post or something, and then she’ll walk over and do the same thing. It’s really sweet.” They even groom each other and cuddle together.

But more than anything, they love to be wherever Flay happens to be—in bed, on the sofa, and even on the kitchen countertops. “I always laugh when people say to me, ‘I can't believe you let your cat on the kitchen counter!’” Flay says. “I’m like, I don’t think you understand what it’s like to be a cat parent. You don’t get to decide. Cats can go wherever they feel like they want to go. They leap! They jump!”

And these days, Flay says he’ll even turn down plans to stay home with Nacho and Stella. “No question about it, I’d rather do that than most things,” he says before referencing a TikTok about a cat parent, who, with his cat on his lap, says that he’s stuck there—he can’t go go to work, hang out with friends, or even move. “Sometimes I feel that exact same way,” Flay says with a laugh.

Even if being a pet parent has helped him slow down a bit, as of last year, Flay found a way to combine his love of food with his affinity for cats with Made by Nacho, a line of ingredients-first cat food, which includes dry and wet, plus catnip and treats.

While Flay says that Nacho inspired the line, the chef didn’t originally set out to launch a business based on his cat. “It was more about not really knowing what to feed him,” Flay says. “You know, I basically spend every day of my life feeding people one way or another, whether it's my restaurants or my books or my TV shows, and my cats are such an important part of my life. It just made sense that I would think about how to feed them better, too.” 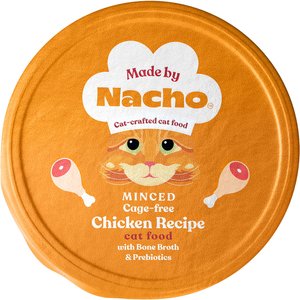 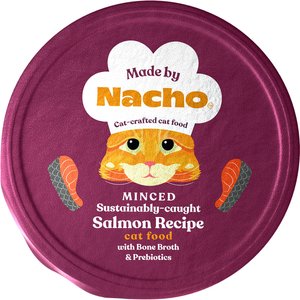 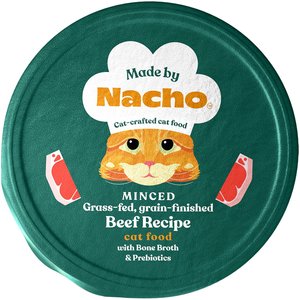 Nacho, as the brand’s namesake, is an important part of the taste-testing process. Chicken recipes top the list of his favorites, with salmon a close second. But more than just being a way to feed his cats, Flay has found that these tasting sessions give them all a chance to spend quality time together.

“I look forward to coming home and seeing them after I’m out all day,” he says. “It’s not just something I have to squeeze in—it’s part of my every day.”

After a lifetime of being “raised by cats,” Flay’s learned a few things about keeping felines happy and healthy. Here’s his advice, from one cat parent to another:

“No matter how healthy a cat is, their hydration level is very important because a target spot for cats are their kidneys,” Flay says. To help with that, Flay pours Made by Nacho bone broth over his pets’ food.

To avoid claws on your sofa, invest in a scratching post, then add some catnip. “Thankfully he uses that instead of my nice furniture,” says Flay of Nacho. (Find out more ways to keep your cats’ claws out of your sofa.)

Flay’s trick: Put the carrier out an hour or two before you leave to get them used to the idea of cozying up inside. That way, you avoid what Flay calls “an octopus with claws” situation. He also brings treats and water for the ride.

Like this story? Check out more of our favorite reads: