Puppy Rescued After Being Trapped in a Well for 11 Days

It’s the puppy rescue celebrated around the world.

According to Istanbul’s Daily Sabah, a 3-month-old pup somehow got trapped in a 230-mile-deep well in Beyzok.

Once the story hit social media (thanks, in part, to the hashtag #DirenKuyu) the efforts to keep the canine—named Kuyu—alive and well became a top priority among volunteer workers and concerned citizens. It’s reported that people sent down food and water to the pup who was “growling in pain.”

Because Kuyu was stuck in such a narrow opening, it was difficult to try and get him out, despite the best efforts from the Disaster and Emergency Management Authority and other volunteer workers.

Thankfully, after eleven harrowing days, as the city held its collective breath and kept its hopes high, a mining company was able use cameras and a system of pulleys to get Kuyu out.

The incredible moment, which was caught on film, shows the rescuers celebrating with great joy at the puppy’s long-awaited emergence.

On its website, the Istanbul Fire Department reports that the puppy was seen by veterinarians and after a clean bill of health, Kuyu was adopted by the fire station “with the support of animal lovers.”

Rescuing Ray: Adopting and Caring for a Blind Dog
Meet the Plott Hound who doesn’t need sight to have a positive outlook.
Up Next 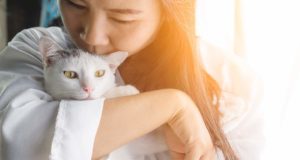 Coping with the Anxiety of Leaving Your Cat or Dog When You Go Away
Do you feel separation anxiety from leaving your dog or anxiety about leaving your cat when you travel? Here’s how to cope.