BeInspired / People X Pets / Smush, the Kitty with a Cleft Lip, Has a Face to Love

Smush, the Kitty with a Cleft Lip, Has a Face to Love

Photographer Shannon Jackson lives by the motto of many animal activists and lovers: adopt, don’t shop.

Jackson, who resides in Northern Florida with her wife Sarah Jenne, has eight adopted pets, and the most recent addition to the clan is a 6-month-old kitten with some adorable features.

Smush, as she is lovingly named, has a cleft lip as well as some other genetic abnormalities including smaller teeth (Jackson says that sometimes she looks like Dustin on “Stranger Things”) and slightly misshapen head.

But even with her differences and her rough start at life, Jackson says Smush is a “feisty kitty who is perfectly healthy.”

When Smush was just a few days old, she was saved by a friend of Jackson’s, animal rescuer and veterinarian Lindsey Hidenrite.

Smush may have risked euthanasia due to her lack of appetite, an upper respiratory infection and a bad case of ringworm, but Hidenrite made sure she got proper care at Helping Hands Pet Rescue.

Jackson, who volunteers with Helping Hands, fell in love with the one-of-a-kind Smush and, after her time in foster care, decided to give this resilient little survivor a loving home to grow and thrive in.

Smush has been living with her forever family for a month now and, with the exception of some kitten biting (she’s still learning her socialization skills), Jackson says she is getting along great with the family’s other three cats, three dogs, and, yes, even a hedgehog. Smush also loves attacking feet, playing with her toy feather, and eating … even if she makes a bit of a mess.

In addition to her new home, Smush has become something of an internet sensation. Smush already has some famous followers and newfound friends, including Monty the “crooked” cat (Jackson says that Monty’s family reached out to show their support).

But what really matters at the end of the day, Jackson says, is that another rescued animal has been given a second chance.

Jackson is no stranger to this, as her pets include a tripod dog and a retired racing Greyhound. She says being a pet parent to animals in need of extra care is “truly rewarding.” 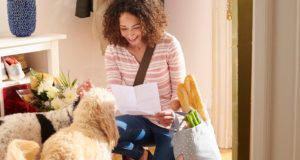 Pet Sitter Checklist: Prepping for Pet Care While You’re Away
Make sure your pet sitter has what they need to care for your pup while you’re away.