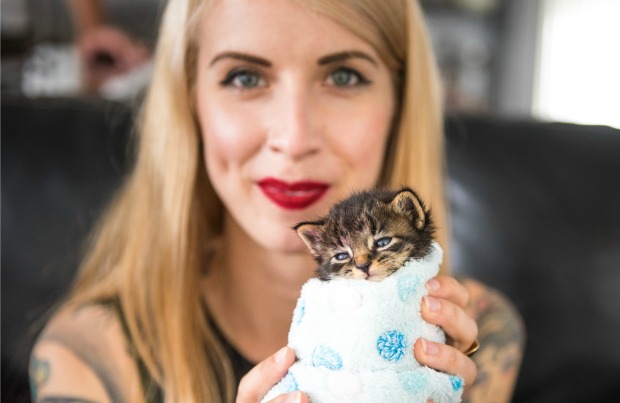 Cat lovers get a bad rap.

There’s the stereotype of the crazy cat lady who lives alone with 16 cats (and one cat litter box). Or the misconception that people who love cats (like, really, really love cats) are somehow less social than their canine-adoring companions.

We’re here to debunk those clichés! Meet three self-proclaimed cat ladies who are anything but crazy.

Hannah Shaw has been working on animal advocacy issues since she was old enough to have an opinion on how animals should be treated.

At 12, she stopped eating meat, started attending animal welfare protests, and even organized a few of her own.

At first her efforts were focused on protecting farm and circus animals. Then soon after graduating college, Hannah found an orphaned kitten hiding in a tree. As she researched how to care for her new companion, she learned how kittens were treated in the country’s shelter system.

What she discovered appalled her.

“In the spring, orphan neonatal kittens can make up 50% or more of shelter euthanasias,” Hannah says. Without a mama, the kittens are just too much work, she says.

Hannah spent three years working with rural shelters in North Carolina, educating them on how to find foster homes for orphaned kittens. Then she took her efforts to Washington DC, where she now works on animal policy issues and lobbies to change the treatment of abandoned neonatal kittens.

Two years ago Hannah started the kittenxlady profile on Instagram. Originally it was just a place to post pictures of the kitties she fostered without overwhelming friends on her personal social media channels. But at more than 146,000 followers, it’s become a platform for Hannah to educate people about the plight of orphaned newborns.

Her goal is to turn followers into fosterers. And it’s working. Every day people write in to tell her they started fostering because of her profile.

A few months ago she started selling merchandise, which has helped her devote her efforts to Kitten Lady full time—at least for the next few months—and still pay her rent.

Her advice to fellow cat lovers is to get out there and help. Foster kittens; participate in trap, neuter and return programs; take in pregnant mama cats; lobby for their protection; volunteer. Do something, she says.

“If you love cats, the best way to demonstrate that love is by participating in efforts to protect them.”

When she was 10 years old, Deena Malkina had to leave everything behind. Even Elvira.

The kitten her mom had found meowing and shivering outside a grocer in their Ukrainian neighborhood had grown into a beautiful and healthy house cat. But there was no room for Elvira in the next chapter of their lives.

At the time, Ukraine was still part of the former USSR. Life was tough. Deena was one of four people living in a 300-square-foot, one-bedroom apartment. Groceries were rationed. Every morning her mom lined up at 5 a.m. to wait hours for a liter of milk.

In an effort to seek out a better life, Deena and her family moved to the USA. They had no money, no belongings, and no Elvira. The sweet girl was given to a neighbor.

“It was pretty traumatic. I was saying goodbye to my whole world,” Deena says. “Now, I realize it was for the best … The opportunities I had here would have never happened in the Ukraine.”

Among those opportunities was attending Harvard Business School, where Deena learned to turn her passion for the Elviras of the world into a full time job.

In early 2014 she and a partner launched KitNipBox, a monthly subscription box of cat treats and cat toys. A chunk of the company’s revenue goes to animal welfare programs across the country.

Seeing her company’s diverse client base has just proven to Deena that there’s more than one way to define a “cat lady”.

“‘Cat ladies can be anyone; they can even be men,” she says. “We need to raise awareness of the fact that we’re not just one type of person.”

Stef Hu was always a dog person. But when she rescued her first cat five years ago, she started looking at the world through a different lens.

“I used to think cat people were insane,” Stef says. “Then I finally got one and I was like, cats are so freaking weird! Now I understand the fanaticism.”

To celebrate her newfound appreciation, Stef created whycatwhy.com, a site that attempts to answer your burning questions about feline behavior. Recent posts include: “How do I get my cat to stop licking me so much?” and “Why are cats so obsessed with bathrooms?”

As she dug into the research, she discovered there were fascinating answers to even the most basic cat questions.

“Cats purr at a frequency that stimulates healing and regenerates bone growth. They do it to relax, and they also do it when they’re injured or stressed out because it stimulates healing,” Stef says. “I thought, wow, they’re like Wolverine!”

Becoming a cat lover has changed her.

“I’ve become a lot more curious and open to the world because of how wrong I was about cats,” she says.

When she’s in a group setting she now goes out of her way to chat up the people who seem the most shy and awkward.

Her advice to other cat lovers? “Fly your freak flag!”

“At some point society is going to have to accept that cats are these awesome creatures that inspire this fanatic devotion,” she says. “The less ashamed and more loud and proud we are, the more likely the rest of the world will realize we’re just regular people who really love something.”

Girl Gets Kitten for Birthday and Her Reaction is Priceless
After her mom surprises her with a kitten for her birthday, 6-year-old Brooklyn reacts in a way that will melt your heart.
Up Next

5 Tips for Dealing with Squeaky Toy Craziness
Dogs love playing with squeaky toys because it taps into their prey drives. But the high-pitched sounds and non-stop noise can drive a pet parent crazy.