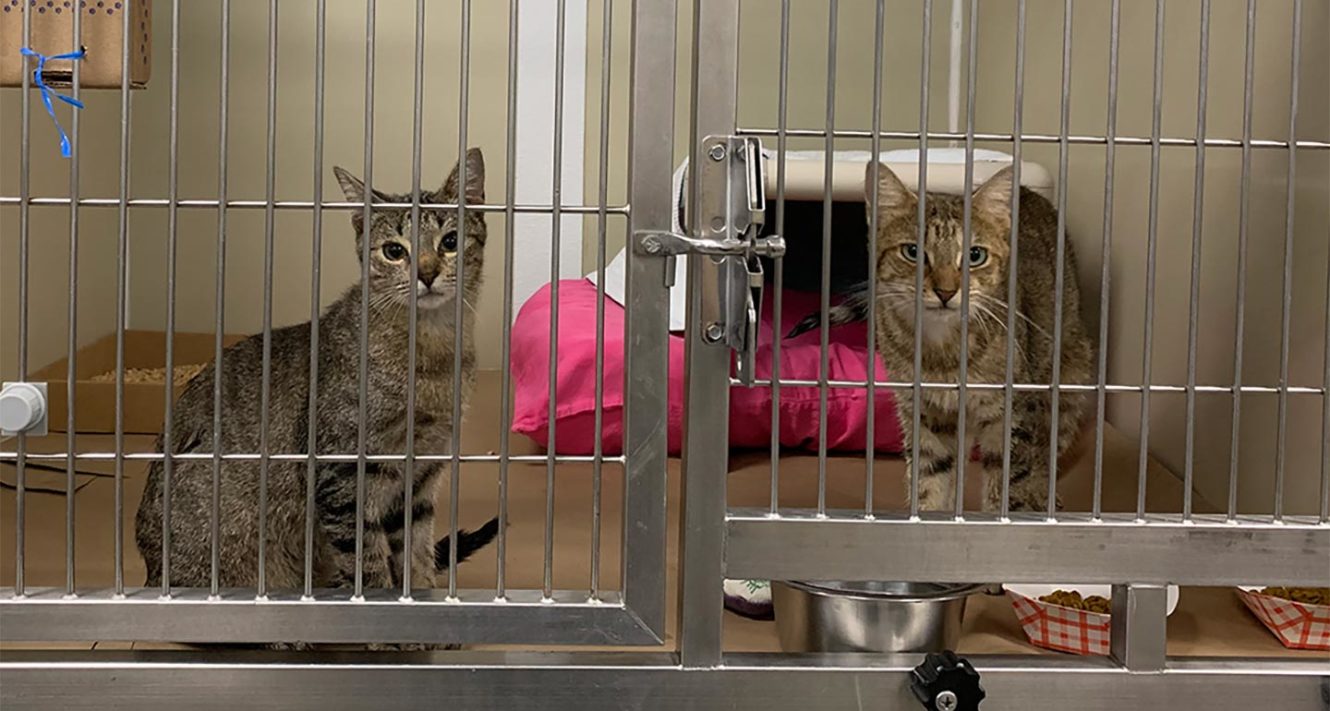 BeGenerous / Chewy Gives Back / Hurricane Dorian Recovery: How You Can Help the Pets and People of the Bahamas

Hurricane Dorian Recovery: How You Can Help the Pets and People of the Bahamas

As Hurricane Dorian approached the Bahamas in late August 2019, staff at the Humane Society of Grand Bahama decided to ride out the storm with the animals at the shelter. But they couldn’t have known the scary and painful experience they were about to endure.

“Their staff stayed at the shelter protecting their animals until the flooding became so serious that they had to go up through the ceiling tiles to save themselves … The staff swam their way out, then came back and cared for the surviving animals,” says Nora Parker, goodwill ambassador/special projects for St. Hubert’s Animal Welfare Center in Madison, New Jersey.

St. Hubert’s eventually took in the 84 cats who survived the storm.

The tragic story touched readers around the world, making headlines even as more details of disasters all across the Bahamas came to light in the wake of the storm.

“They lost a lot of their animals,” Parker recalls somberly. “To us, they’re heroes.”

After the devastating storm finally cleared in early September, a network of organizations, businesses, volunteers and shelter workers was ready to help. Their efforts have saved countless animals across the islands, and you can support their work by donating to the cause.

Denise Bash is Director of Disaster Response for GreaterGood.org, one of many groups that have banded together to help those 84 cats—and countless more across the Bahamas—recover and thrive in the aftermath of Dorian. Led by the International Fund for Animal Welfare (IFAW), the Dorian Animal Relief (DAR) coalition has collected groups like GreaterGood.org to bring relief to Grand Bahama and Abaco, two of the hardest-hit parts of the Bahamas. They’ve received an outpouring of support from across the globe, including from businesses like Chewy, which has donated over 15,000 pounds of food and hard goods to GreaterGood.org and dozens of other relief organizations.

“We are managing daily requests from the DAR to meet the needs of response organizations [there],” says Bash, describing GreaterGood.org as a hub working with dozens of other organizations to collect and send supplies and fund relief efforts. “We have needs coming from veterinarians who have lost everything and are now serving the public. We have needs coming from the shelters themselves that are still standing.

“So, what we’re doing is sending everything they could possibly need: pharmaceuticals, awarding them grants so they can … replace damaged equipment, replacing veterinary supplies, feeding them every day and giving them supplies to catch and transport animals.” 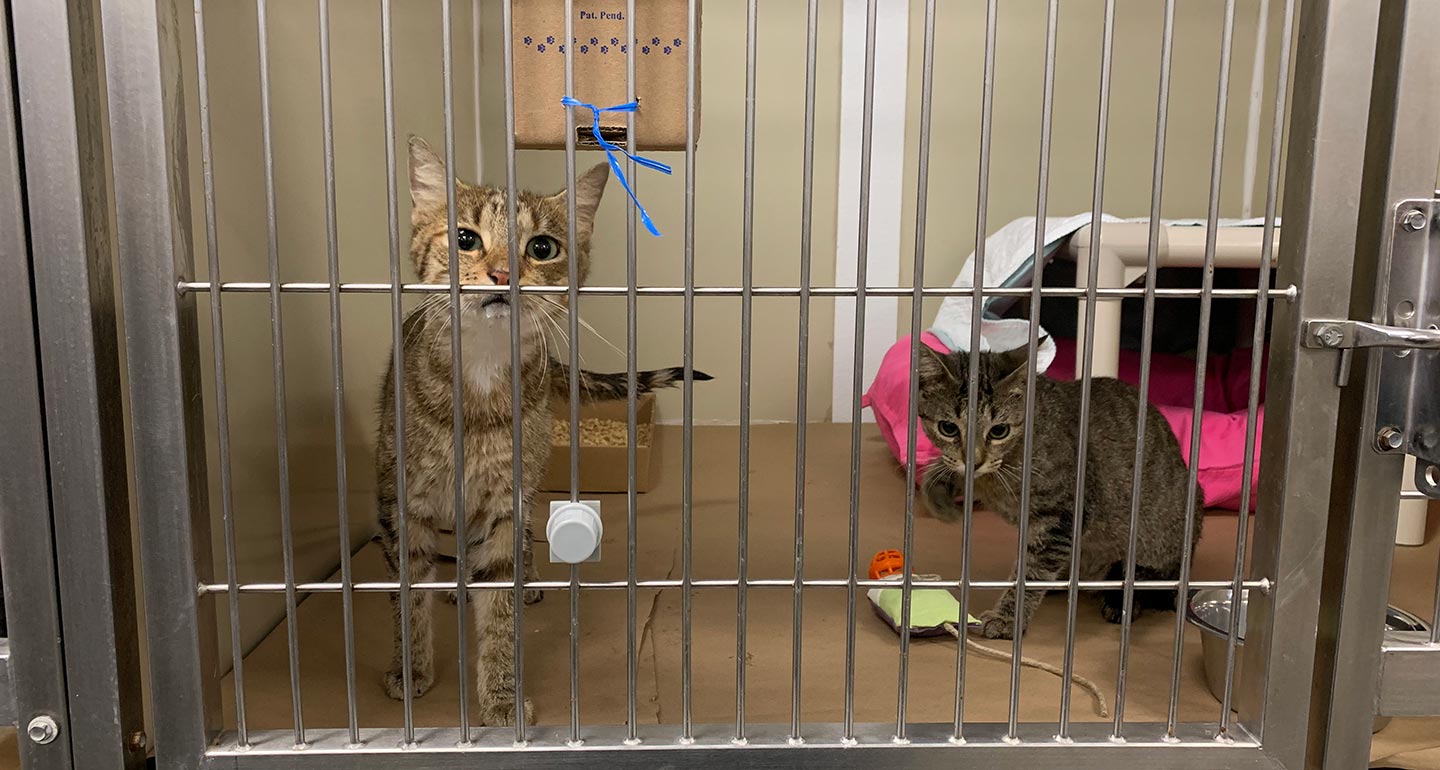 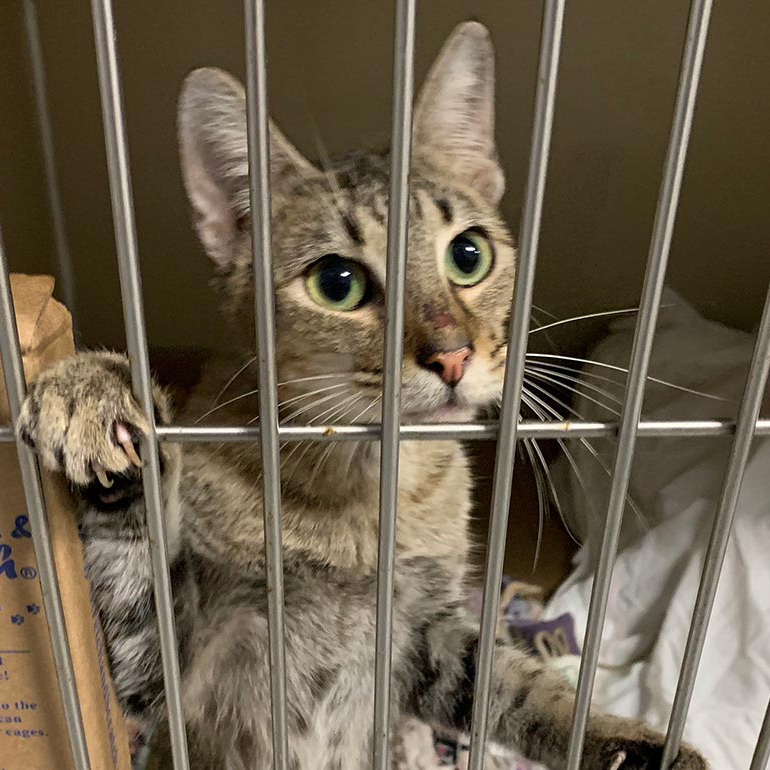 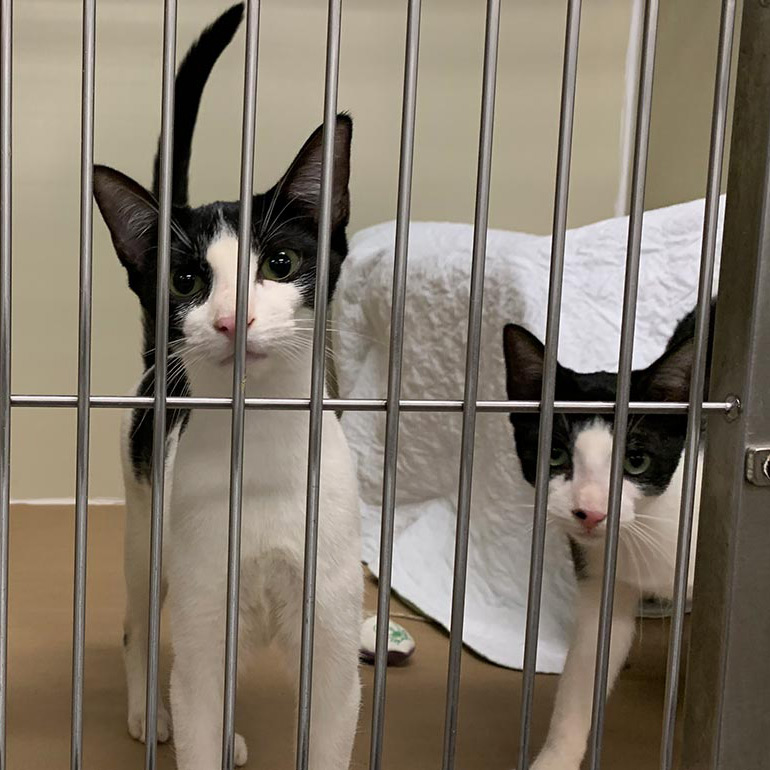 Efforts like those were critical to ensuring the safety of the 84 cats who eventually found themselves at St. Hubert’s. Wings of Rescue, a nonprofit that transports pets-in-need by plane to no-kill shelters, flies planes between supply warehouses in Florida and the Bahamas, delivering much-needed supplies and picking up pets with no place else to go.

“We send supplies, and they coordinate pet transports with the coalition,” Bash explains, emphasizing that the organizations of the DAR coalition try to keep pets with their parents whenever possible. In fact, adds Parker, it’s common practice for relief organizations to move adoptable animals away from disaster areas, because it frees up room and resources to allow local pets to stay near their loved ones. Pet parents who’ve lost their homes, for example, can house their pet in a local shelter while the orphaned animals who once lived there find homes in other parts of the world. 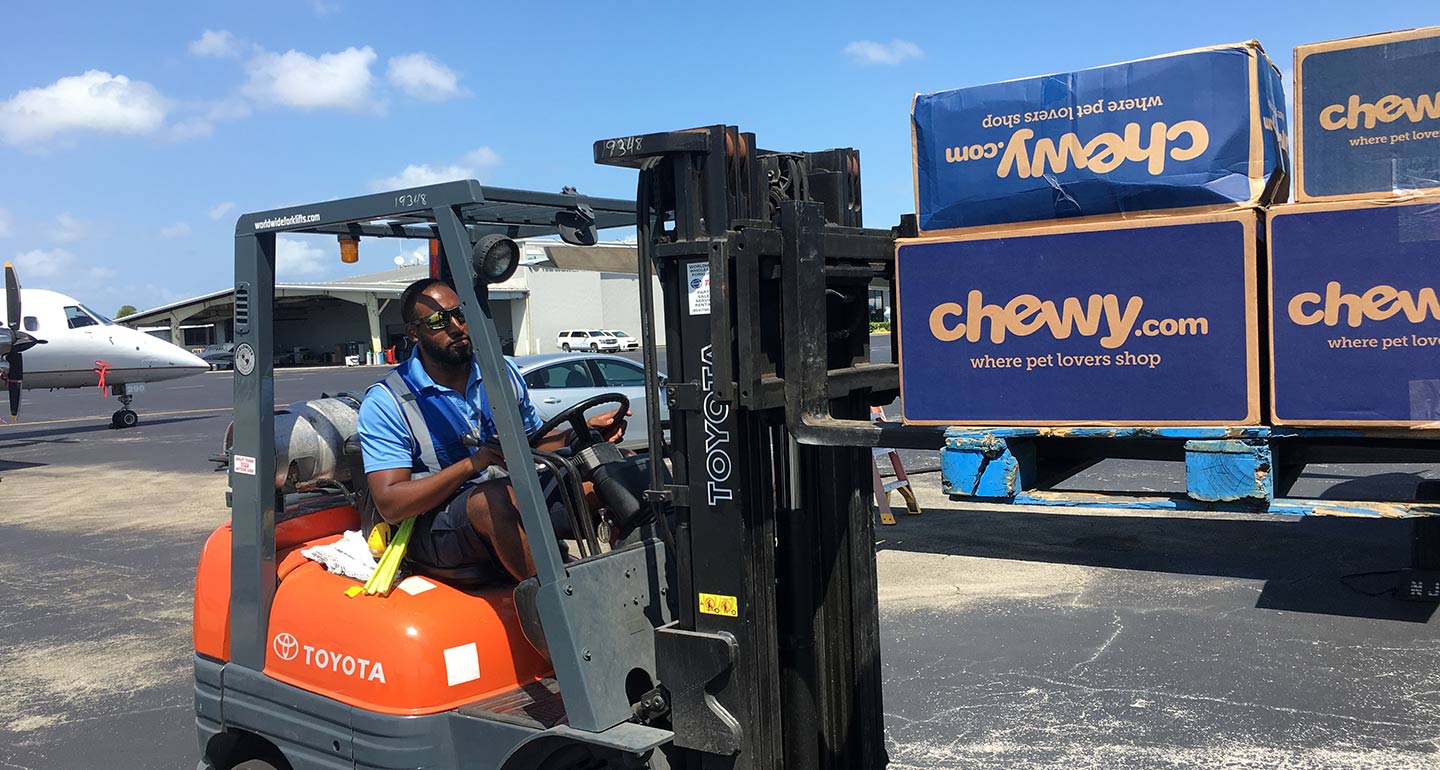 Courtesy of Wings of Rescue

Wings of Rescue transported the 84 cats from the Humane Society of Grand Bahama to Florida, and from there the cats were transferred again, this time to a New Jersey runway. There, they were met by St. Hubert’s staff, who stayed into the night to greet the flight.

“Our staff of course was devastated to hear [what had happened at the Humane Society of Grand Bahama] because we can relate to that. Our animal care staff said they simply could not imagine that happening,” Parker says. “We wanted to do whatever we could to help.”

“There were a lot of tears here over what had happened, and a lot of tears when the plane landed,” Parker recalls. “We had welcome signs and signs offering our support to the Humane Society of Grand Bahama. It’s an emotional thing to the staff.”

The staff was also prepared for a difficult job. After the traumatic experience of surviving the storm, the cats coming to their shelter had endured two long flights and delays that stretched their travel time by several hours. The workers of St. Hubert’s didn’t expect to find many happy kitties inside those carriers.

Imagine their surprise, then, when the cats emerged from the plane acting, well, pretty normal.

“What an amazing, resilient bunch of cats,” Parker says, awed. “It’s an incredible testament to the care they were receiving at the Humane Society of Grand Bahama. They were all vaccinated and spayed or neutered…. And they ate right away, and were rubbing on the bars [of their temporary quarters], and the younger ones were playing with their toys. They were very affectionate. We could not get over the resilience of them.

“If we had been through what they went through,” she continues, “I don’t know that humans could have been that adaptable and resilient.”

After a two-week quarantine period, the cats were made available for adoption. Some have been sent to shelters in Massachusetts and elsewhere in New Jersey, where the demand for adoptable cats is greater; about 40 remain at St. Hubert’s. (People interested in adopting the cats can contact the shelter.) Parker is confident that they’ll all find homes.

“There’s a huge trust factor in the partnerships” between shelters, she says. “Once we send a pet to another shelter, we can trust that they’ll be cared for.” 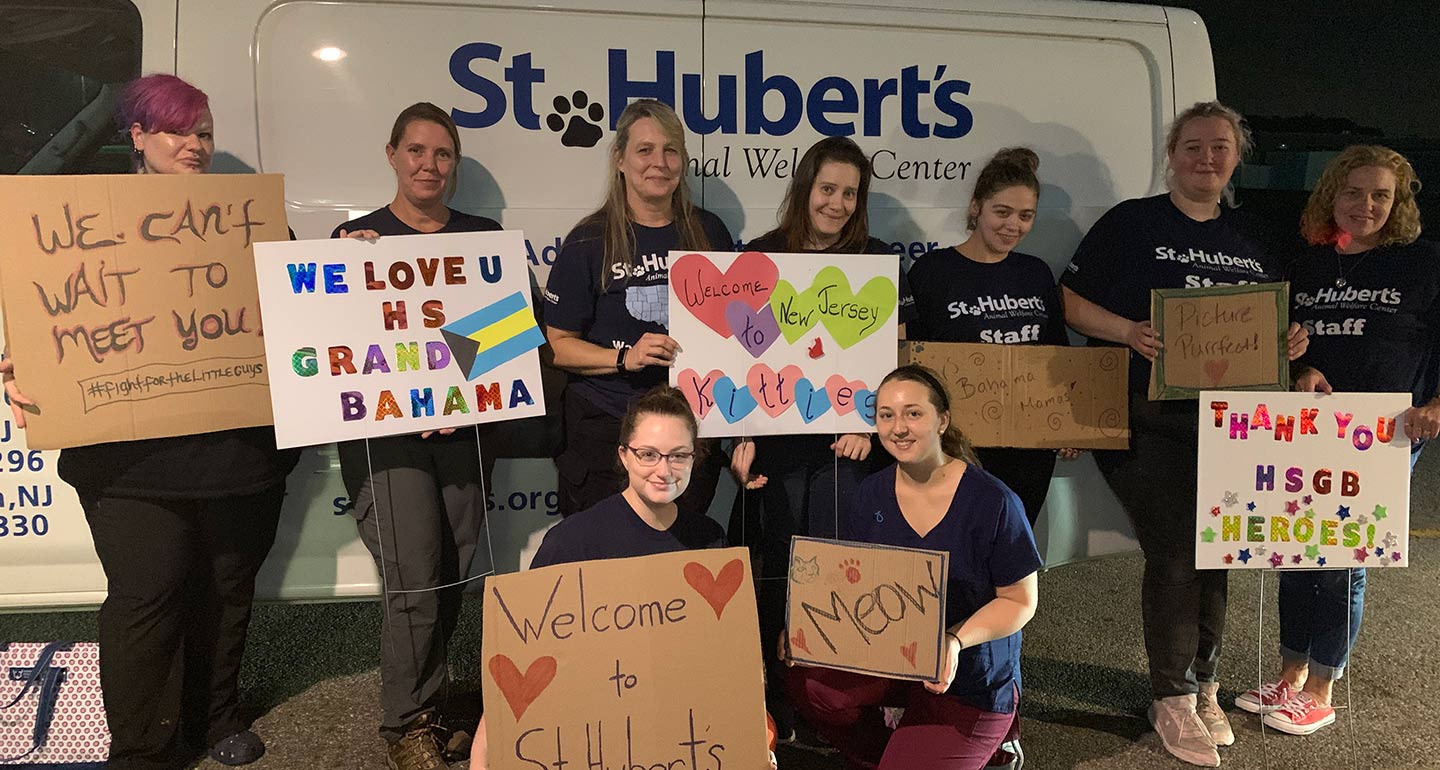 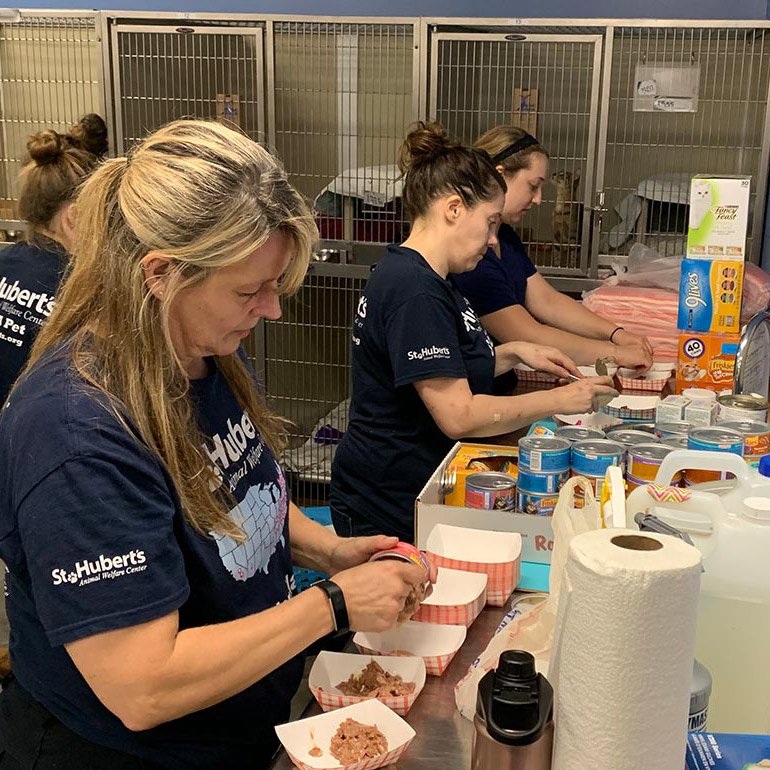 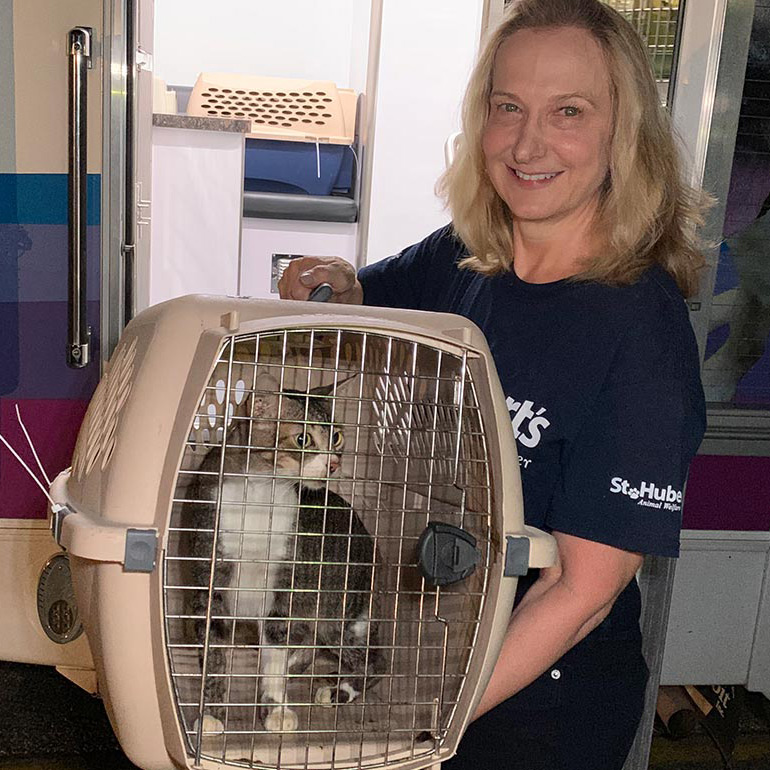 The story of the Humane Society of Grand Bahama’s cats has ended happily, but there’s much more work to be done to ensure the safety and happiness of pets and their people in the Bahamas. Over a month after the storm, Bash says, life in places like Abaco and Grand Bahama is still a struggle.

To bring safety and support to the people and pets there, she says, groups like GreaterGood.org need the help of animal lovers all over the world. Chewy stepped up to help, with donations of slip leads, crates, flea treatments, cat litter and litter supplies, and hundreds of cases of food for pets in need, including vet diet foods for animals with special dietary needs. In the weeks after the storm, individual pet lovers across the world did the same, stepping up to contribute to donation drives.

But there’s still more to do—and it’s not as simple as donating a few cans of food. Bash says that without funds to transport donated items, they’re doing no good.

“Our warehouses are full,” she says, emphasizing that GreaterGood.org is not accepting individual donations of goods. “The best thing that an individual can do, if they want to help, is to donate cash.”

To that end, GreaterGood.org and Chewy have partnered to create a Dorian relief fund. Monetary donations made to the fund will help pay for things like Wings of Rescue flights and warehouse space as well as provide financial support to partners like St. Hubert’s. To add your support, visit GreaterGood.org and Chewy’s Hurricane Dorian donation page.

Parker echoed the need for cash donations for St. Hubert’s; you can give directly to that shelter via sthuberts.org/donate. She says pet parents can help even before a disaster strikes by having emergency plans for their animals in place, to avoid needing the assistance of shelters like St. Hubert’s in the future. And of course, she adds, bringing a displaced pet into your own home helps tremendously.

“If you can open your home and heart to a kitty, it doesn’t matter whether it’s a cat that was already here or one who came from the Bahamas. It’s still helping two cats,” she says, “the one you adopted and the one who gets its spot.”

No matter what, Bash says, GreaterGood.org is committed to helping the people and pets of the Bahamas recover.

“This is a long-term mission for us. GreaterGood.org does not just ride in and ride out,” she says. “We’ll be working with them on recovery for years.”

By: Ciara LaVelle
Ciara LaVelle is a writer, editor and mama to two tiny humans, rescue pup Zeno, super cat Manny, too many fish to name, and a garden full of succulents. She lives and writes in South Florida. 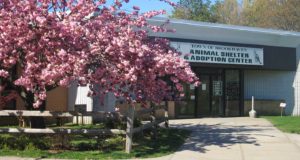 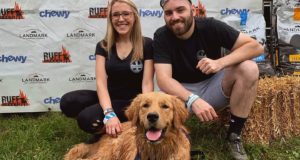 How Brewski the Three-Legged Dog Conquered the Ruff Mudder Obstacle Course
Brewski the Golden Retriever was born with only three legs, but that didn't stop him from competing in Tough Mudder's dog obstacle course, Ruff Mudder.