Meet Tink, the Dog Who Uses a High Chair to Eat

When the Sullivan family brought home a silver Labrador Retriever named Tink in 2016, they noticed that the pup (the runt of her litter) had trouble keeping her kibble down.

What seemed like normal puppy behavior at first (gotta get to that dog food, and stat!) quickly turned scary.

“A week after bringing her home, she had a terrible fit of regurgitation,” says her owner Thomas Sullivan. “She was exhausted and one side of her belly was distended. We were afraid that she had bloat so we rushed her to the emergency vet.”

It was then that Tink was diagnosed with megaesophagus, a condition in which the connection between the esophagus (the tube that connects the throat to the stomach) and the brain are not developed. This causes food to become trapped, leading to regurgitation, malnourishment, and other issues including cough, nasal discharge and pneumonia.

“In Tink’s case, she was born with the condition and there is no known reason for its occurrence,” Sullivan says. “If she does not eat vertically and remain vertical, the food will remain trapped in the esophagus and will be regurgitated from her body. This can happen with water and foreign objects as well.”

The Sullivans were told the outlook may not be good for Tink and that caring for a dog with megaesophagus is not easy, but they were not deterred. They took her to an internal specialist at Michigan State University to learn how to take care of their pup as best they could and help her eat safely.

After getting Tink’s diagnosis, the Sullivans found out about how to feed dogs with the condition in a Bailey Chair, which was the first chair they used to feed her vertically.

Since then, the Sullivans have built another high chair for Tink and received a third as a gift from someone whose dog with megaesophagus had passed away.

“Having the chairs makes the entire process incredibly easy compared to trying to hold her upright or have her stand,” Sullivan says. “After feeding, she will fall asleep while sitting vertical in her chair. It keeps her regurgitations to a minimum, which helps to keep her food down.”

Tink loves her chair because she knows that means it’s time to eat.

“She is totally a lab in her love for meal time,” Sullivan says. While Tink struggled to stay in the chair after feedings early in the process, Sullivan says she’s content in there now “as long as she can see us.”

Taking care of a dog like Tink (who is now a little over a year old) is a process.

“Everything must be planned around her feeding schedule,” Sullivan says. “We also can’t comfortably leave her with others because of the level of care it takes and all of the little things associated with keeping her from regurgitating.”

But the family hopes that Tink’s story inspires people to learn more about megaesophagus and understand that it is not a death sentence for dogs.  And in the case of the Sullivans, it’s given them a whole new lease on life.

“There is a level of bonding that happens with a dog with megaesophagus that makes it completely worth the time and effort put in,” Sullivan says. “We spend so much time with Tink and she is so dependent on us that there’s a deep love between us.”

Doggy Daycare and Pet Boarding Do’s and Don’ts
Use these pet boarding tips for pet hotels and pet daycare to ensure your pet has a positive experience while you are away.
Up Next 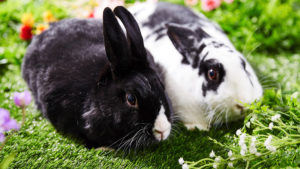 Holiday Gifts For Your New Pet Rabbit
Look through our list of Christmas gifts for rabbits to spoil your pet rabbit this holiday season!