BeWell / Wellness / What Is Trancing?

But for some reason, some dogs creep as in slow motion, in an almost trance-like manner, when they walk beneath hanging leaves, table clothes or clothes that just lightly touch the dog’s back. Here’s an example.

It’s not a focal seizure, as some people suggest. You can call the dog out of it, some with more difficulty than others, although they seem reluctant to stop what is apparently very pleasurable behavior. Except, well, weird. Once interrupted, they’re perfectly normal but seem kind of put out that you spoiled their interlude.

Dogs often have favorite trancing tree or area, but there’s no common tree species that might hint at a scent trigger. And some prefer hanging clothes. Some even prefer odder things, but most have in common trancing beneath something that hangs down and scarcely touches their back.

Certain breeds seem to trance more than others. Greyhounds and Bull Terriers (yet another in trance action) seem to head the list. But Salukis also seem to have more than their share, as do Basset Hounds. I’ve also heard of it in at least one Whippet, Jack Russell, Labrador, Irish Setter, Cane Corso, Cavalier, Australian Cattle Dog and Puggle.

A group of Bull Terrier owners conducted a survey in 2004 to see if there was any correlation between trancing and neurological problems. Nope. There was also some thought that trancing could be a type of obsessive compulsive disorder, which are more commonly seen in Bull Terriers. Maybe, but if so, it’s not going to lead to other obsessive behaviors.

A leading researcher, Dr. Alice Moon Fanelli of Tufts Behavioral Clinic, had this to say: “I should mention that an extraordinarily large number of Bull Terriers trance. Some tail chase while others do not. While trancing is an abnormal behavior, I now view it as separate from tail chasing. In other words, if any of you have a Bullie that’s currently walking in slo-mo under your Norfolk Pine as you read this—don’t panic that this will eventually evolve into tail chasing!”

Trancing isn’t associated with known neurological disorders, doesn’t seem to be a cry for attention (as one site suggested), doesn’t seem to take over the dog’s life, and doesn’t seem to leave anyone worse off. It just seems to be something some dogs really enjoy. And it’s a lot better than chewing the furniture or digging holes in the lawn.

Does your dog trance?

An Answer To Why Chinchillas Bite
Whether or not a pet chinchilla bites mostly depends on how an owner treats him and the environment provided.
Up Next 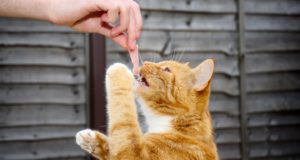 6 Superfoods For Cats (Yes, They Do Exist!)
As cat owners we want our felines to live long and healthy lives. These 6 cat friendly super foods will help with your cat's longevity and vitality.