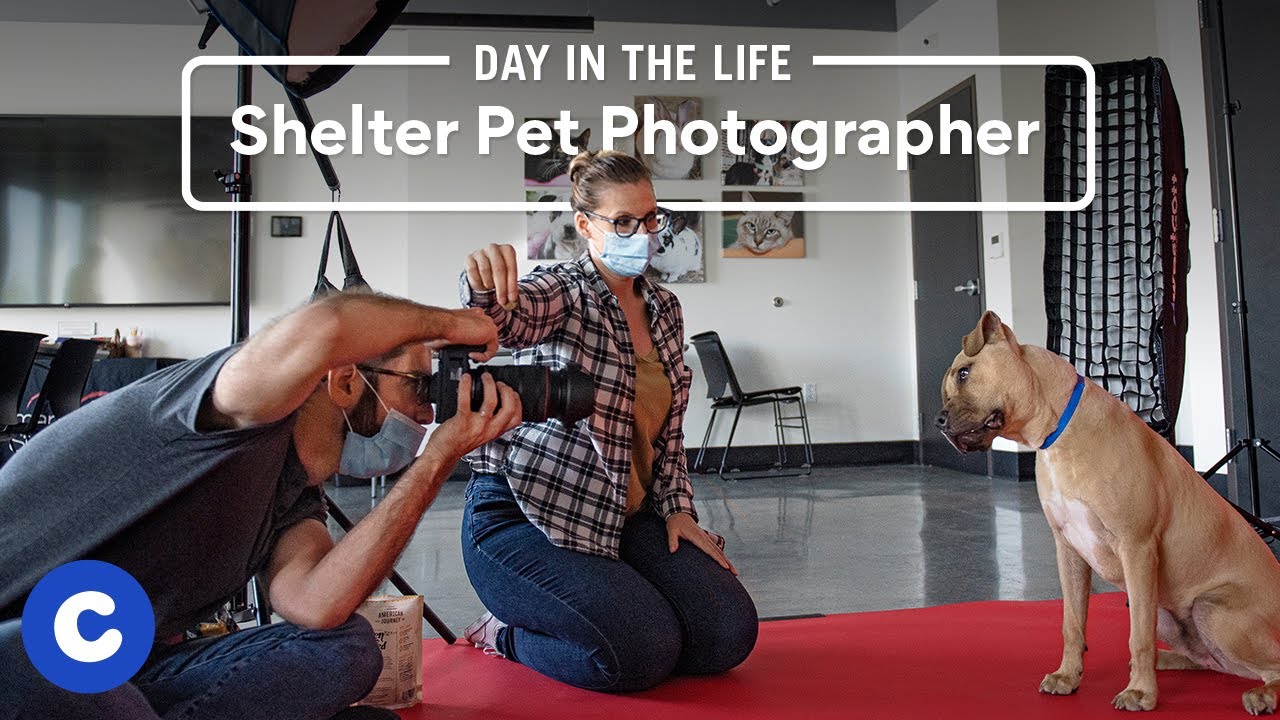 These Photographers Are Helping Thousands of Shelter Animals Find Homes

Adam and Mary Goldberg will do whatever it takes to capture a great pet photo. Sometimes that means taking a dog for a run to release her nervous energy and bring out her friendly smile. Other times, it means waving a toy to focus a kitten’s attention into an adorable wide-eyed gaze. Lying on the floor of a kennel to bring the camera lens eye-to-eye with a guinea pig? Been there.

But to make sure each pet they photograph finds a forever home, it’s all worth it.

The Goldbergs are the owners of AGoldPhoto Pet Photography studio in Tampa, Florida, but they say some of their most impactful work takes place a short drive away, at the Humane Society of Tampa Bay. That’s where the two animal photographers volunteer to take flattering, friendly photos that capture shelter pets’ individuality and character. These images serve as pets’ first introduction to potential adopters—and it can mean the difference between a pet finding their forever home or spending another day, week or month in the shelter.

“That’s the first representation that people see,” Adam says. “You try to get their personality to come out through the photos.”

Over the last five years, the Goldbergs have photographed more than 1,200 shelter animals, and also raised over $250,000 for homeless pets. They’ve photographed it all, from skittish cats and rambunctious dogs to guinea pigs, ferrets, rats, rabbits, birds—even squirrels and baby raccoons.

Adam first noticed the problem with typical shelter pet photos when he took a job as a social media specialist for the Humane Society of Broward County in Fort Lauderdale, Florida. “The photos were taken top-down so you couldn’t see the size of the pet, and the flash would create these red eyes,” he recalls. “Sometimes [volunteers] would shoot the photos through the chain-link fences.”

Adam knew these photos were doing the animals a disservice. They weren’t capturing each pet’s unique personality—and worse, they sometimes showed the pets looking afraid or aggressive.

“If it’s a photo of a scared animal, most people, subconsciously or even consciously, are going to skip over it,” Adam says. “They can’t visualize that dog in their home.”

It's not just about the individual pets that we’re photographing. It’s about the bigger mission to promote pet adoption as a whole.

So, he set out to change that. Adam had grown up watching his father, an amateur photographer, take and develop photos, but apart from experimenting with cameras as a child, he had no photography experience. To find out how to take better pictures, he started watching photography tutorials online, and convinced the shelter to invest in a Sony A65 camera. He began training two-person teams of volunteers—one animal photographer and one handler—to take more flattering photos of the pets, advising them to crouch down to get on eye level, shoot outside and not through a fence, and to avoid using the flash. The photos immediately improved, and Adam enjoyed watching increased interest in the pets when their pictures were posted to social media.

“It was night and day, the difference that a good photo makes,” he says.

Over time, Adam learned more tactics to calm and bond with each pet. He came to photoshoots with treats, peanut butter and cheese to gain the trust of nervous and scared animals. He kept a calm demeanor, and focused the attention of the hyperactive ones with toys. He even learned how to train a dog to sit: “Put a treat just above its head, which sort of makes the dog sit down on its own.”

“It’s true of any pet, but especially shelter pets, that they are in tune to your emotions and can pick up on that. It’s important to not let your frustration get the better of you,” Adam says. “You need to keep a calm demeanor, get the pets comfortable so you can not just take a good photo of them but also so that they trust you.”

In December 2015, Adam moved to Tampa and began visiting the Humane Society Tampa Bay every other weekend to photograph pets as a volunteer. That’s where he met Mary, an advertising executive who was helping the humane society with a campaign—and who shared his love of pets.

“The shelter has always been one of my happy places,” she says. “If I was like having a bummer of a day or feeling like depressed or whatever, I would just go to our local shelter and go and pet the dogs and take them for a walk and just hang out."

After a successful shoot, Mary texted Adam her behind-the-scenes photos of him splayed across the kennel floor with a guinea pig. It marked the beginning of not only a romantic partnership (the couple married three years later) but also the Goldbergs’ ongoing quest to combine their skills to redefine pet shelter photography.

Adam and Mary at home with their pets.

When the couple wed in March 2019, their four-legged family members were in attendance as well. (The Goldbergs have three pets of their own: Bee, a Boston Terrier-Chihuahua mix; Rigby, a Schnauzer-Poodle mix; and their cat, Sierra.)

After their wedding, Adam and Mary embarked on fundraising events all around the country (often with their furry crew in tow). They staged roughly 300 pet-photoshoot fundraisers for pet shelters and animal charities as far away as San Diego, California, and Kansas City, Missouri.

Today, the couple photographs pets and their families full-time, while continuing to volunteer. Adam is the man behind the camera, while Mary sets up the studio and holds the pets’ attention with treats, toys and other tactics.

On the shelter’s social media, Adam and Mary can’t help but notice how an adorable photo rakes in the comments, likes and shares—ultimately resulting in adoption. “Some people see the photo online,” Adam explains, “and they’re like ‘Oh my gosh! I have to go get that dog!’”

Adam and Mary on a shoot at the Humane Society of Tampa Bay.

They’ve had to put in-person fundraising events on hold due to the pandemic, but are continuing to raise money for animal shelters with a coffee-table book titled “Tails of Gratitude: Thank You Notes from People to Their Pets,” a compilation of pet portraits and notes written by their two-legged family thanking them. The goal is to raise $7,500 for the Humane Society Tampa Bay with the book, slated for publication this November.

In the meantime, they’ll continue to help shelter pets find forever homes, one photo at a time.

“If we’re able to show people what that pet would be like in their home, with a better photo that shows off their personality, that makes a huge difference,” Adam says. “But it’s more than just about the individual pets that we’re photographing. It’s about the bigger mission to promote pet adoption as a whole.”

Want to help homeless pets? Give back to a shelter or rescue near you. Here’s how.

The 10 Best Dog-Friendly Vacation Destinations for 2021
Dreaming of travel? Bring your pup along to these top dog destinations of 2021 for an unforgettable dog-friendly vacation.
Up Next

6 Unforgettable Ways to Include Your Dog or Cat in Your Wedding
Thinking of including your dog in your wedding ceremony? Check out how real couples incorporated their pets in their special day.