Pets in Weddings: How Four Couples Included Their Dogs in Their Happy Day

Thinking about including your dog in your engagement or wedding? Pets in weddings are becoming a lot more common, as many couples want to include their four-legged family members in their special occasions. Whether your dog is an active part of the ceremony or just there to join in on the fun, you’ll create memories just by sharing your special day with them.

Here are four stories of how some couples managed to include their furry friends in one of the most important days of their lives.

According to Kristina Howley, Cedar and Cypress are such big sources of joy and love in the couple’s lives that including them in the wedding was one of the first and easiest things they agreed on for the big day. “They are both rescues who started life living on the streets, and they’ve had to work through some serious timidity and anxiety,” says Howley. “So for the wedding day, we wanted them to feel comfortable and included.”

“At the ceremony, they were walked in by their grandparents and stayed close by the altar,” Howley says. “At the reception, Cedar hung out with the kiddos mostly; he loves the pets and tail grabs even though he looks like a somber old man in some of the photos. Cypress was a big fan of the taco bar and how often people would accidentally drop cheese or beans.”

When they needed a breather from the action, they had a calm space to lie down by the wood stove and would duck over there. It also helped that the wedding was held on family land, one of Cedar and Cypress’ favorite places on earth—familiar, happy and safe. “I’m sure it made interacting with so many people at once a lot less stressful,” Howley says.

Howley points out that the main event for the dogs was probably the dog cake. “Our Aunt Carol made a special applesauce cake with bone-shaped treats as decoration,” says Howley. “As you can imagine, they wolfed it down.”

Daly was there when Dan proposed in the mountains of Steamboat Springs, CO, and for the couple’s engagement shoot on the shores of Lake Huron in Ontario, Canada. So, it made perfect sense he would join the wedding reception too.

On their wedding day, Daly was dressed in a dog bow tie to match Dan’s. “We’d hired an on-site pet sitter for Daly, but he did pretty great,” says Holly Glisky. The reception was held in a large tent outdoors, and Daly had a seat of honor right behind his pet parents’ chairs.

When Natalie and Jonathan started wedding planning, they knew two things right off the bat: they wanted an outdoor ceremony on the river, and they wanted a dog wedding that their two pups would be a part of.

“Jager showed up on my husband’s doorstep 10 years ago, the summer we started dating, and it’s always been said that Jager is his true soulmate,” says Natalie Thomas. “They were inseparable, and Jager came with us on so many adventures.” The couple rescued Jax together in 2014, and he turned out to be Natalie’s soulmate. “We always felt like they were our kids and such a huge part of our family, so we couldn’t imagine them not celebrating with us,” Thomas says.

On their wedding day, Jager acted as the dog ring bearer and walked out with Jonathan and his groomsmen and stood with them during the ceremony. They both sported striped dog bow ties to up the adorable factor. “Jax was walked down the aisle by the ring bearers and flower girls and stood with my bridesmaids during the ceremony,” Thomas says. “With a mostly black and white themed wedding, they completed the look and made our pictures that much more special.”

While the dogs took a little break during the reception, they came back later and took over the dance floor.

Jager said his final goodbye to the family in December 2017. “We feel so lucky Jager was able to see his parents make it official after 10 years and before crossing the rainbow bridge,” Thomas says.

As Betty Fraser puts it, she and Todd were “theater folk,” so there wasn’t much choice but to turn their wedding into a production complete with a Mardi Gras theme. “When we started thinking about a ring bearer, we considered using the kids of one of our friends, but that seemed a little standard,” Fraser says. “And then it hit us: Why not use our own kid?”

Meet kid Jake, a 5-pound Chihuahua who was appointed the dog ring bearer. “We only told one friend what our plan was,” says Fraser. “He was responsible for wrapping the rings around Jake’s neck, and at the right time, he put him down at the end of the aisle in the hopes he’d come to us.” And while Fraser points out that in the theater, you don’t go on stage unless you’ve done a lot of rehearsal, they had none. “It was a total shot in the dark that the guests wouldn’t freak him out and he’d run the other way,” Fraser says.

When the time came to exchange rings, the friend set Jake the dog ring bearer down and hoped for the best—except that Jake just stood there. “As we started getting into that uncomfortable pause phase, he noticed us and start moving,” Fraser says. “But instead of sprinting to us like he normally would, our little guy sauntered down the aisle like he owned the place. He must have known it was showtime.”

Find the Perfect Dog Wedding Outfit for Your Pup

Separation Anxiety in Dogs and Cats: How to Comfort Your Pet While You’re Away
Do you worry about your pet when you travel? Here are some tips for how to deal with separation anxiety in dogs and cats as a pet parent.
Up Next 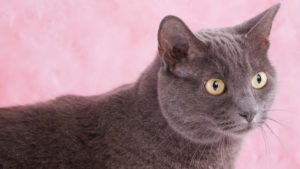 7 Cute Valentines Messages for Pets
Are you spending Valentine's Day with your four-legged friend?