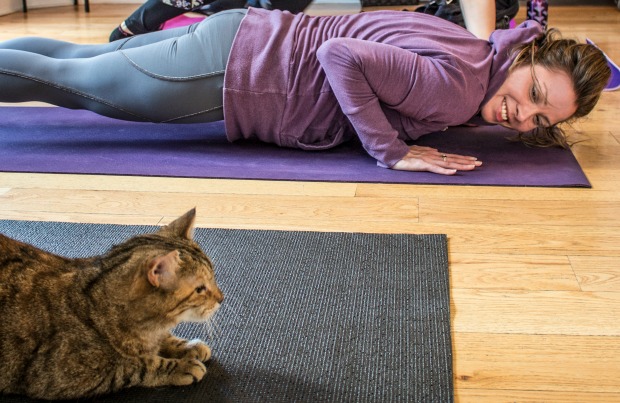 BeInspired / People X Pets / Yoga With Cats: I Took a Class and Lived to Tell the Tale

Yoga With Cats: I Took a Class and Lived to Tell the Tale

These days, there’s a yoga class for pretty much everyone.

From Beyonce vinyassa to Bowie hatha, studios aren’t shy about taking some liberties with the “Yoga Sutras” —and as a sucker for a gimmick, I’ve dutifully sampled them all. Over the course of my questionable yogi career, I’ve attempted tree pose on a paddleboard, got stuck in an aerial hammock and slowly crept out the back door after accidentally registering for breakdancing yoga.

So when I saw Yoga With Cats pop up on my newsfeed? Naturally, I was in.

A fundraiser for the Pennsylvania SPCA, the premise of Yoga With Cats is fairly simple: humans flow through a class at the adoption center, and adoptable cats choose if they want to grace said humans with their presence.

As for the humans, we were psyched. The inaugural class quickly sold out—others have since been added due to popular cat-lady demand—and participants arrived early to debate which spots would be the most feline-friendly. In perhaps a first for yoga classes, the warmest, sunniest corners of the room were the most coveted.

As for the cats, well, the cats were skeptical. Some clearly appreciated the opportunity to roam the adoption center. Some were a little more reluctant, cautiously exploring the space. All were clearly confused why 30-some women were sitting around on mats, cooing and dangling socks in an attempt to win their favor. Although dog yoga classes have been around for awhile, it was starting to become apparent why cat yoga hasn’t quite taken off.

Things changed, naturally, once class got started—as everyone knows, as soon as you’re busy doing something else, cats expect your undivided attention. A chubby tabby made his rounds, weaving in and out of legs before stretching out across a mat and demanding belly rubs. A shy calico tiptoed through my Down-Dog, stopping for a pet before paying a visit to my neighbor. Did I sense that the fluffy Persian was judging my sloppy Triangle pose? Yes, but I can’t blame her.

Some of the more serious yogis followed every cue, flowing gracefully from Chaturanga to Up-Dog as little paws pattered by. Others paused between poses for a quick head rub. And then there were those who clearly spent $15 to hang out with cats and had no intention of wasting time in Warrior.

Will your local studio be offering cat-centric classes on a regular basis? Probably not. But as for me, I’m ready for round two. While the premise may seem silly, there’s nothing more relaxing than settling into Shavasana to the sound of purrs.

Monica Weymouth is a writer, editor and certified Weird Animal Lady. She lives in Philadelphia with her two rescued Shih Tzus.

Koi Rescue: The Real Deal on Saving Swimming Pets
Dog and cat rescue is common in the U.S., but these animal lovers are committed to saving koi fish. Read about their organizations.
Up Next