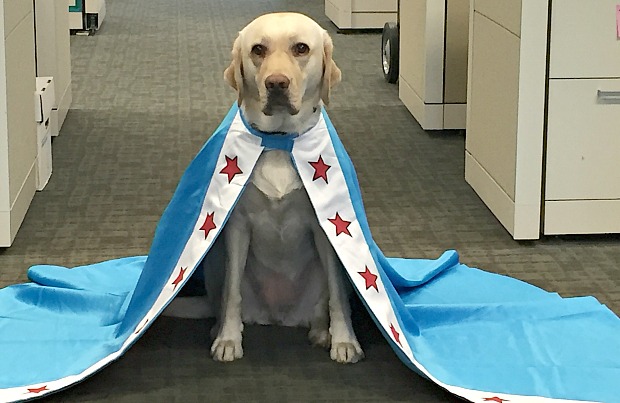 The Real Stories of Courthouse Dogs

Imagine you’re six years old and testifying in court. Terrifying doesn’t begin to describe what that must feel like. If you could reach down and pet a dog who is peacefully sleeping by your feet, you’d likely feel calmer. This is where the Courthouse Dog Foundation comes in.

Developed in 2008, the Courthouse Dog Foundation (CDF) connects legal professionals across the country with professionally-trained assistance dogs, usually Labrador or Golden Retrievers. These dogs provide quiet companionship to vulnerable individuals in legal settings without causing any disruption to the proceedings.

“We have 137 of these dogs now working in the US,” says Celeste Walsen, executive director of the CDF.

Courthouse dogs are valued at $40,000 each. The application process for handlers is like adopting a child, says Walsen, and can take up to 12 months to get accepted. Training organizations like Canine Companions for Independence (CCI) choose the dog for each handler, who are either working in or have retired from jobs in the legal system.

The dogs must graduate from accredited assistance dog schools, like CCI, before they begin work and every year they are reevaluated to make sure they maintain the standards needed to be a courthouse facility dog.

When the dog retires at an age that varies depending on the dog, they become their handler’s pet (their snuggling skills make them especially good house pets).

Walsen shares a dog, Molly, with Ellen O’Neill-Stephens, founder of CDF. Molly is nine-and-a-half years old and was recently evaluated by CCI. She can work for at least another year. O’Neill-Stephens and Walsen use Molly for demonstration purposes when they are showing potential “clients” what a courthouse dog does.

“It’s hard for judges and attorneys to imagine adding a dog to the courtroom,” says Walsen, “so Molly goes with us to show them.”

Below, meet two CDF dogs and see how they spend their days on the job.

JoJo, a yellow lab, trained for two years with CCI before being paired with her owner, Mary Pickett. Between the ages of six and nine months, her trainers determined she was best suited to become a courthouse facility dog. Her calm nature, combined with her ability to stay quiet and not react to loud noises or emotional outbursts, made her a great choice for courthouse work, Walsen says. Her training followed the courthouse dog track until she reached two years of age and began work.

JoJo learned to tolerate whatever was going on around her, like other dogs barking or people trying to distract her, and to be at ease with many different people. Pickett, who works as an investigator for the Contra Costa District Attorney’s Office in Martinez, California, spent two weeks learning how best to work and care for JoJo before she could take her home. Besides learning how to properly hold JoJo’s leash and read her body language, Pickett also learned 40 difference commands she and JoJo use throughout the day on the job.

During her first trial in 2015, JoJo comforted a 12-year-old girl during the six hours she spent in the witness chair testifying against her molester. When the girl and the dog parted, the girl waited in a room that happened to have a whiteboard. There she drew a picture of JoJo and wrote, “I heart symbol (love) JoJo. She is a cute dog.”

After a day in court or at the Children’s Interview Center where she works her magic with children or mentally-challenged adults, JoJo takes off her blue vest and goes for a walk with Pickett. When Pickett and JoJo aren’t working in the legal environment, they do outreach at schools, their local Rotary Club and the library.

“Children just love her,” says Pickett. “Kids lay on her, one child rubbed her ears for an hour and she didn’t care.”

Willow, The Only Courthouse Dog in Alabama

Willow, a Labrador-Golden Retriever mix, was trained with CCI in Orlando, Florida. As with all the dogs and their handlers working in the court system, training is ongoing for both Willow and her owner Tamara Martin, a forensic interviewer and victim advocate of the Child Protect Children’s Advocacy Center of Montgomery, Alabama. Now, as the only courthouse dog in the entire state, Willow keeps very busy. Once a week she accompanies victims appearing in front of a grand jury.

One day, as Willow and Martin were waiting in the courthouse before their assignment began, a handcuffed prisoner was escorted through the hall. Martin noticed his stress and asked his escorts if Willow could visit with him. The prisoner, handcuffs and all, rubbed her head and cried while Willow’s tail wagged like mad. To her, he needed comfort, says Martin.

Willow often falls asleep during the duller parts of her day and snores during court and forensic interviews, Martin says. She and Martin also spend time with the state investigators for Internet Crimes Against Children (another high-stress job). Martin brings the investigators lunch or snacks and they release some of their tension playing with Willow.

On her days off, Willow acts like a teenager. She gets up early to eat breakfast, sleeps and plays. Whenever she can, she likes to sunbathe and swim at a nearby lake.

“Willow’s unconditional love and calm manner helps people whether they are involved in domestic assault, crimes against persons or the victim is a child,” says Martin.

Heather Larson, who lives in Tacoma, Wash., writes about dogs and travel and sometimes traveling dogs. 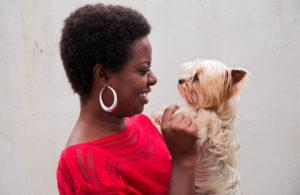 8 Surefire Signs Of A Trustworthy Pet Sitter
If you're heading out of town or traveling, finding a trustworthy pet sitter is important. Here are eight things to look for in a pet sitter.
Up Next

World’s Bravest Cat Chills Next to a Rattlesnake
In a jaw-dropping photo, a cat is seen fearlessly hanging out next to a rattlesnake