Road Tripping with Ranger: How One Dog Is Helping Heal a Broken Heart

When my mom suddenly passed away from complications with pneumonia in April 2016, I had a lot of things to worry about besides the obvious shock and heartbreak I felt. At the top of my list of worries was my stepdad, Robert. I worried about what Robert would do moving forward without my mom. Would he be able to take care of the house, cook for himself and stay healthy? What would he do with his time off? Would we even really stay in touch?

As a stepfamily, there’s a certain level of separation that just naturally occurs no matter how hard you try to avoid it. Now that my mom was no longer around to bridge the connection, I worried that my relationship with Robert would fall to the wayside and that even as an adult, he wouldn’t really be equipped to handle his new life as a widower, at least not right away.

Robert is a gentle and loving guy, but it was my mom who ran the household and helped Robert manage his relationships. My mom took her family and friendships very seriously, and she worked hard to stay in touch with everyone she knew, from the two best friends she’d had since junior high to the woman who often helped her at Rite Aid. Without her there to help him, I wondered and worried if Robert could do the same.

What I hadn’t counted on throughout all of this worrying, however, was Ranger.

Ranger is my mom and Robert’s much-beloved Australian Shepherd. At 50-plus pounds and with the energy of a toddler, Ranger can be a lot to handle, but he’s totally loveable all the same. Robert and Ranger had been close ever since he and my mom rescued him in 2009, but really it was my mom who spent the majority of time with him. My mom suffered from multiple sclerosis most of her adult life, and Ranger had come to be her lifesaver and constant companion.

Since she didn’t work, my mom and Ranger spent most of their days together taking walks around the block, hanging out on the back deck when the weather was good and visiting with neighbors and friends. When Robert worked late (which was often in his high-pressure job), my Mom would be annoyed, but she always had Ranger there to keep her company until he returned.

I knew that Robert enjoyed the companionship of his dog as well, but what I didn’t know was just how much Ranger would come to mean to him — and to me —in the months after my mom’s death.

My mom passed away in April, and at the end of July I gave birth to my first child. Much to my surprise, Robert was one of the first people to book a trip out to visit my daughter, and he let me know that he would be bringing Ranger with him.

Together with my mom’s brother, Robert and Ranger climbed into their Honda and drove the 26-plus hours from their home in upstate New York out to mine in Denver. They made a fun road trip out of it by stopping at various landmarks along the way, Robert posting photos of himself and Ranger (and sometimes my uncle) in front of state signs, at the entrance to museums and national parks and in various hotels along their route.

Having an adventure with Ranger, it seemed, was just what Robert needed.

Since that first outing the adventures have continued, and it’s become clear to me that while Robert works on getting over the pain of losing my mom, Ranger is the one who will be there for him in a way that no human can. They’ve road tripped up the East Coast all the way to Maine and take weekend adventures as often as possible to neighboring Hudson Valley towns to try out restaurants, breweries and new hikes.

Ranger has helped Robert meet new people and try new things, and in the months since we lost my mom, those outings have been nothing short of a lifesaver. They’re a lifesaver for Robert, sure, but also for me. Because now I know that with Ranger by his side, Robert will be just fine.

The adventures that Robert and Ranger have gone on to date have been great, but that doesn’t stop Robert from planning future escapes. The pair are planning another trip out West to visit me and my family again, and this time they’ll take a different route so they can visit different sites along the way.

And while Ranger has made it to an impressive 24 states thus far, that’s just the beginning of what Robert has planned for his pup. The open road and idea of an adventure beckons to all of us from time to time, but for Robert and Ranger, packing up and heading out means so much more than just creating memories.

By keeping him busy, Ranger is slowly but surely helping Robert to move on, and vice versa. Robert and Ranger both lost their best friend and soul mate when my mom died, but together, they’re getting through it. Besides the happiness I feel knowing that Robert has a companion to come home to every night and to hang with on the weekends, I’m more than sure that my Mom is happy watching it all unfold as well.

Cheryl Lock is a writer and editor who lives in Denver, Colorado with her husband, daughter and cat, Penny. Her work has appeared in dozens of newspapers, magazines and websites, and she’s written about everything from pets and politics to parenting, travel and food. Find more of her work at CherylLock.com, or follow her passion for travel on her blog at WearyWanderer.com.

4 Tips for Happy, Healthy Senior Cats
Pet Central gives you 4 tips for keeping your precious senior cat in perfect health and happiness.
Up Next 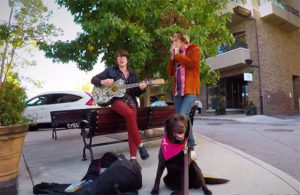 Dog-Friendly Asheville Spots You Have to Visit
How to spend the day in Asheville, North Carolina with your dog.