When Mercedes Garcia first saw Amber, a 2-year-old Pit Bull who had been intentionally doused with gasoline and lit on fire, she didn’t know what to think.

“I’ve never seen a dog burned like that,” Garcia, the office manager of the Scott Valley Veterinary Clinic in Fort Jones, California, says.

Amber was covered in second- and third-degree burns as a result of a domestic dispute in Yreka, California (her former owner was arrested and charged with animal cruelty) and was brought to the Scott Valley Veterinary Clinic to receive treatment for her condition.

Dr. Art Spencer, the owner of the clinic, began treating Amber in April 2017. According to Spencer, she had burns on over 20 percent of her body. At 60 pounds, Amber is a typical, well-muscled dog of her breed type. However, due to the severity of her injuries, the road to recovery was not easy and required extensive laser therapy and mineral supplements for her skin.

Garcia met Amber during her initial laser treatment. The Pit Bull was nervous and didn’t like the required application of essential oils on her. The laser therapy, on the other hand, made her feel better. Any reluctance to interact with the staff, even through the difficult moments of her treatment, was limited.

“Once we were done with the unpleasant part, she was in pretty good spirits,” says Garcia.

Overall, it took a month of repeated treatments and, in the end, Amber needed her ears to be cropped due to the damage they sustained. Spencer credits the laser therapy for Amber’s current pain-free health and full recovery.

“Most of the burned areas are repaired and her skin healed rapidly,” he says. “Her skin is completely normal.”

But it wasn’t just the medical treatments that the staff at the clinic attributed to Amber’s relatively quick recovery.

“She’s just a happy-go-lucky dog,” says Spencer, who was taken by Amber’s disposition. “If I didn’t have other dogs, I probably would have kept her.”

How Attitude is an Asset

Garcia has seen her fair share of animal patients come through the doors of the clinic during her 17 years there and says that the animal patients who have a better disposition are the ones who heal the best.

“The ones who are upbeat tend to heal faster,” she says. “When they’re depressed, they don’t recover as well.”

With her positive outlook and affection for her caretakers, Amber didn’t hesitate to show her gratitude towards Spencer and the two developed a bond during her time at the clinic. Whenever Amber saw Spencer, Garcia says, she would try and get on his lap and give him doggy kisses. “She just really loved him,” says Garcia.

Through it all, the staff marveled at Amber’s resolve to love people and found it uplifting that, despite the horrendous act she suffered through, she still maintained a sweet disposition.

“The incident had no effect on her personality whatsoever,” says Spencer.

Amber’s stay at the clinic was temporary, and after being moved to the Oregon Humane Society, the healed canine was put up for adoption and is now living happily with her new owner.

Amber’s ability to heal is a testament to two things: the power of the love and care from dedicated veterinary professionals around her and her own inner strength.

Of her time at the clinic, the staff is wistful. Although Garcia was upset to see Amber there in to begin with, she says she’s happy to have met Amber and that she’s now in the home she deserves.

“We still talk about her all the time,” Garcia says. “I’m glad she was able to get out of that situation.”

Though the crime was something unfathomable, especially to animal and dog lovers alike, her abuser pleaded guilty to animal cruelty charges and is now receiving mental health care.

Christina Chan covers a range of topics from health and wellness to pets. She’s fortunate to have her canine companion, Ellie the pug, snoring by her side during writing sessions. 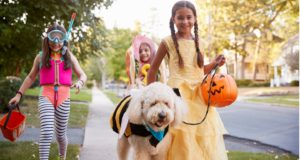 Halloween Safety Tips: Trick-or-Treating With Your Dog
Make trick-or-treating with your pet a safe and enjoyable experience with these Halloween safety tips from pet experts.
Up Next 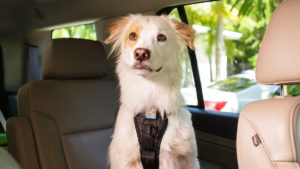 Keeping Your Dog Safe in the Car
Make traveling with a dog a safe experience with these products designed to protect your dog in the car. Reduce the chances of car accident pet injuries with these tips.