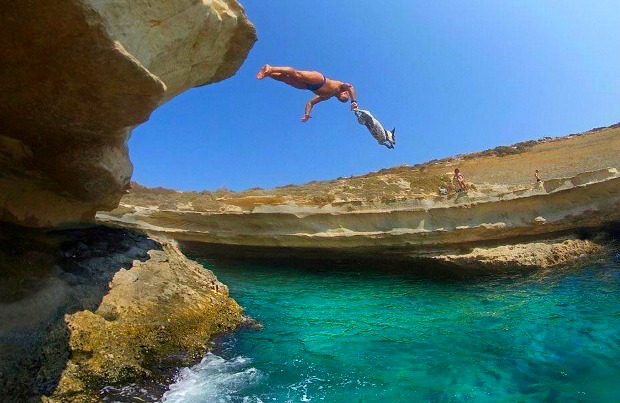 Carmelo Abela will always remember one of the first times he and his then five-month-old Jack Russell Terrier, Titti, visited the St. Peter’s Pools in Malta. The pools are a famous attraction, a geological wonder that sits on the 122-square mile Mediterranean island’s southeast tip. Think: round inlets filled with brilliant azure water, all flanked by white stone cliffs ranging in height from three to twenty feet. Abela had been diving from the cliffs for years, when, for reasons he can’t quite explain, a thought jumped into his mind: I wonder if my new dog would like to dive in with me.

It took a bit of coaxing and trust, but Abela spotted up for a dive, stepped back—and Titti followed suit, the both of them jumping off a nearly 10-foot cliff, fully extended in the air, into the blue water. Abela and Titti, now seven years old, have been diving nearly every day ever since.

“I love her enthusiasm every time we go to the sea,” says Abela, who is in his 50s and works for Malta’s traffic department. “Titti enjoys every dive. I can see her tail wagging even mid-air during dives.”

The activity has become a fun game for the two, says Abela. “She enjoys it so much,” he says. “If I’m not paying attention, she will try to run and jump ahead of me.”

Diving from Malta’s cliffs has garnered the pair quite a bit of international attention. They’ve been covered in newspapers, magazines, and TV shows around the globe; racked up over 8,000 likes on their Facebook page; and brought in over a million views to YouTube videos that feature the two.

Abela says he’s received a small amount of criticism from people who feel that he’s putting Titti in danger. But, he says, he follows a rather strict safety code. “Before we dive, I inspect the sea to make sure that it’s clean and free of debris,” he says. “We’ve been diving together so long that I know the safest places for her to jump from.”

He also adds that when the pair started their hobby, the bay was quite deserted, and rarely crowded. Now that the crowds have picked up, he and Titti won’t dive if there are too many people in the water.

But it’s perhaps on those days where the St. Peter’s Pools aren’t totally deserted yet overcrowded that Titti is at her best. “It’s pretty awesome when we are filmed by people and foreign crews who come to the island to see us,” he says. “She has so much enthusiasm.”

The attention has allowed Abela and Titti to make many new friends. Sometimes the new friends ask if they can dive with Titti, but Carmelo prefers that she only dive with him. “We know exactly how to do this together,” he says, adding that, to keep Titti safe, it’s important that both K9 and human diver know exactly how the other plans to move and dive in the air.

The deep bond the pair has created has tangible benefits for Abela. People who spend time around their pet have lower resting heart rates and lower blood pressure—two metrics that indicated heart health—according to researchers at the State University of New York, Buffalo. Another study conducted in China found that dog owners required fewer doctor visits, took less sick days from work, and also exercised more compared to people who didn’t own dogs.

“Titti is like my shadow,” says Abela. “She follows me everywhere and we are inseparable. I hope that we keep diving for years to come.”

Images by Mark Cassar via Titti the Diving Dog

Michael Easter is a full-time writer and friend to all dogs.

Koi Rescue: The Real Deal on Saving Swimming Pets
Dog and cat rescue is common in the U.S., but these animal lovers are committed to saving koi fish. Read about their organizations.