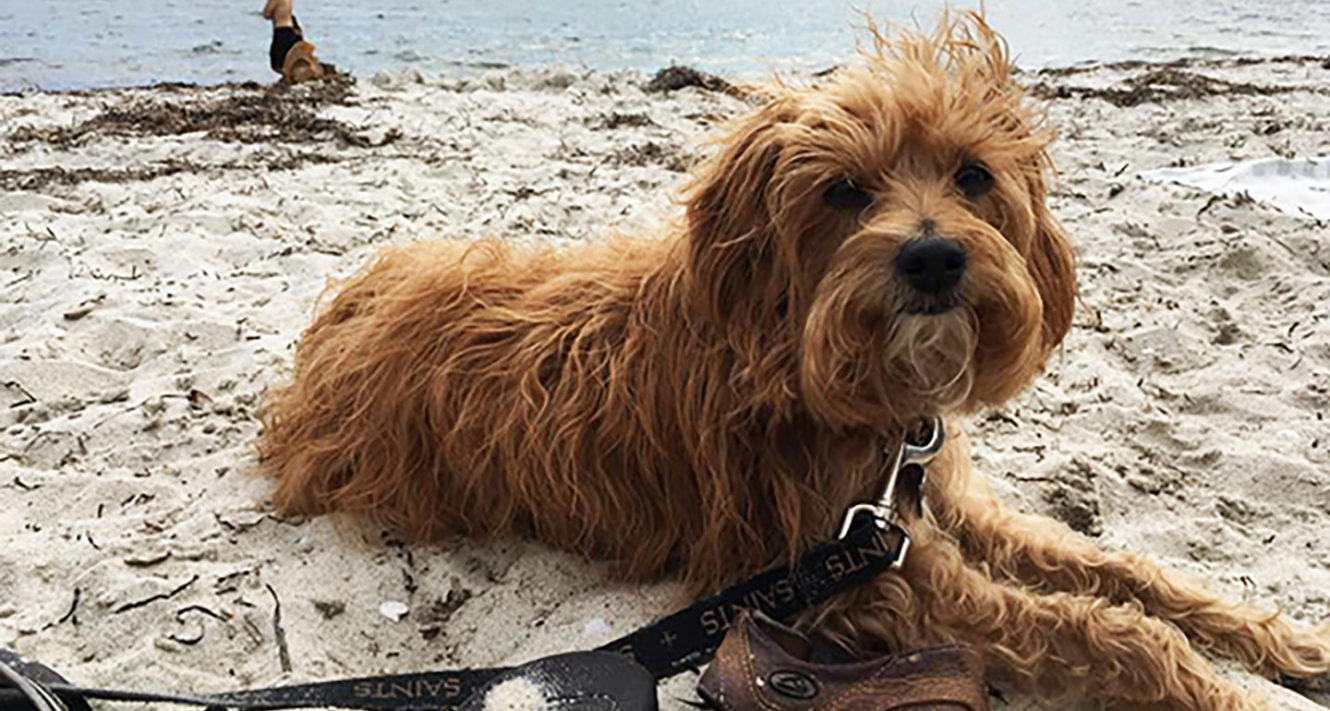 BeInspired / People X Pets / Late Summers with Lando, the Dog Who Saved Me from My Grief

Late Summers with Lando, the Dog Who Saved Me from My Grief

I am downstate, 260 miles from my home in Syracuse, New York, visiting my sister Robin and her dog Max. We brought Max and my dog, Lando, a Bichon and a Yorkie-Bichon, home from Florida together because we were grieving, as we have been for 16 years.

Robin and I are in the Neiman Marcus bathroom at an upscale mall in White Plains, New York. There is one large stall with a sink as well as the necessary toilet. It’s perfect for me. Lando and his stroller fit without any trouble. And believe this: Lando knows every mile we have traveled by car to get here and, while Robin doesn’t take her dog everywhere she can, she understands why I do.

The dread creeps in late July and early August. Not the usual dread of long days of warmth and water coming to an end, but the dread that comes as we get closer to September 11, that horrible anniversary of the Tuesday my daughter left earth.

She worked in Tower II of the World Trade Center, the second tower to be hit by a plane, but the first to fall. The night before, she had dinner at Windows on the World. She ate lobster. She was five months pregnant. That day I lost a baby girl, a grandchild, and all of the possibilities one life offers another.

In the mornings, almost every one for the past ten years, Lando is at my feet when I wake. By the time I think about getting out of bed, he is often wedged in the crook of my knees, or folded between my arms, his head under my chin. At night, he stays close, until he begins to drift and then he goes to the pillow at my feet—close enough, but in his own space on the bed.

Often, in the still of night, I start awake, a tickle in my legs that crawls up, the feeling of some distant but approaching doom. In these moments, despite my husband asleep next to us, I reach for Lando. His golden brown body, his soft sweet head, the blackest nose, his long limbs reaching toward the footboard. Him.

He is a dog I should not have. Before 9/11, allergies to cats and dogs meant no more pets. A month before 9/11, I had a dream that I had a cat and a dog. I woke with the aura of the dream attached, but knew the dog years were over.

On my first visit to my daughter’s apartment after that dreadful morning, one I had in many ways dreamed about before, I fell deeply in love with her Golden Retriever, Skye. Skye was the one being who missed her almost as much as I did, and that was the beginning of the dog years, part two. Skye was meant to stay with us for a two-week visit, but my asthma, once so acute I went into respiratory failure, was in almost complete remission. Skye came in the front door and my breathing was just fine. Maybe the house was big enough. Maybe I needed her.

Lando is so much like me, deeply thoughtful, not really interested in socializing with other dogs, unless a dog holds his trust and interest—like his “cousin” Max, his friend Bella, or his favorite friend and walking partner, Mojo. From Mojo he learned the habit of kicking dirt behind him after he poops, marking every mailbox visited by a problem dog, and that he should lift his leg rather than squat. He loved to hate a sweet Husky named Blitz from three blocks over until five years ago when Blitz died. Lando still intently sniffs his mailbox, and waits for Blitz to emerge so that he can bark him a good lesson.

My sons are grown and still close to me, still people I can talk to. And I love to be with my sister. We plan our weekends together in Yonkers or Syracuse, or our longer trips away. And, there is, of course, my husband who makes me laugh. I love to be with them, but I need to be with Lando; I need his body in close proximity to my own. He is the salve when the horror of living without a daughter hits me anew.

He hates the car, but he hates being left at home more, so when I take him with me, he curls on the passenger seat and pants his way to wherever the destination. In shopping carts in Lowe’s and Marshall’s and any and all places that welcome him, he is with me. I bring a small blanket to protect his long, skinny limbs from poking through the spokes. The man in the wine shop considers Lando a buddy and a damn good customer. And if I’m getting to the point in my life where my little life partner needs me at home more than I need to leave him, that’s just fine with me.

So I take him in his stroller and he watches the world through the screen. He loves this. I took him to class with me to teach, and, when one morning he focused on the book bag and looked at me in that way that said, “stay with me,” I decided to retire from teaching. When I write, he is curled in his study dog bed. And I think, of course, I’ll stay with him as much as I can because I owe him.

He is not my child anymore than I am his. He is not my spirit guide, but together our spirits align. When I feel with immediacy there is a woman in her forties and a 15-year-old child missing from my life, I walk Lando, or I hold him close to me, or I tell him, as I look into his eyes and show him pictures, all of my secrets.

Vanessa wanted so much so fast, and a mother offers caution: Slow down. Life is long. Postpone the gratification. Don’t eat the lobster every night. That was Vanessa’s habit. But I’ve learned. Lando taught me to tell the truth, and to feel what words can’t express. We do not all have the same time here.

So here he is, in his stroller, along for the shopping trip with Robin. We take the pause in the bathroom of Neiman, Robin freshly applying lipstick and Lando, who knows he is with me, who knows Max is not, moves his head to the side of the stroller, and with his eyes, stares gently into mine. 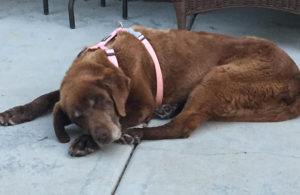 Senior Dog Rescued After Spending 9 Months in the Wild
A senior dog is home safe after surviving a harsh winter in the Idaho mountains.
Up Next