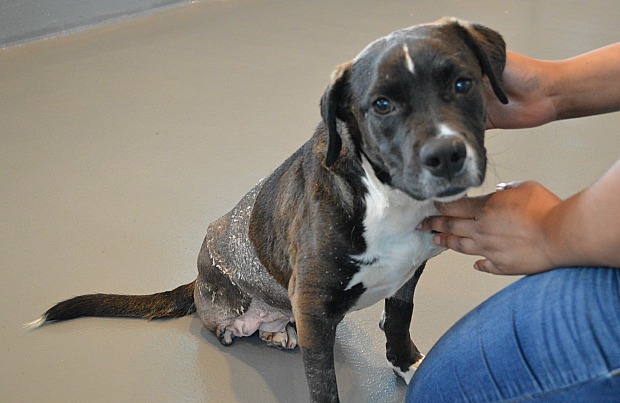 As if surviving a tornado wasn’t enough, Izzy suffered from a severely-damaged rear leg and was found alone amidst the rubble of the aftermath, cowering in a doghouse, by Louisiana SPCA humane law supervisor Justin Blue.

This precious mixed-breed pup would soon prove she was not only a survivor, but could warm the hearts of more than a few people who would come to know her story.

A Bumpy Road to Recovery

Izzy’s path to a new home wasn’t easy. Her leg was so badly damaged that it had to be amputated (the wound seemed to be an old injury that happened prior to the destruction that hit the area). Through it all though, Izzy was a trooper, healing quickly and showing no signs of aggression.

As she recovered, Izzy became a different dog. “She’d wag her tail and would vocalize when I left the room,” says Dr. Jayme Lauderdale, the veterinarian who performed Izzy’s amputation, which took over four hours from start to finish.

Destinie Hammond, the Louisiana SPCA’s communications associate, believes Izzy was in shock when she arrived. “I first saw her being taken off the humane law enforcement truck and noticed how awful the wound looked,” she says.

However, Hammond recognized a chance for Izzy’s story to go public and help her find a family. WWL-TV, a local New Orleans television station, shared what happened to the two-year-old dog and soon after, a young couple adopted Izzy.

Unfortunately, they returned their three-legged companion to the shelter a mere month later when they were no longer able to care for her.

Izzy Gets Another Chance

In Izzy’s life, even the worst of situations can turn into happy ones. When the Izzy’s news story was first broadcast, there was another family interested in making her their own. Delbert Frederick of Hammond, Louisiana, originally tried to adopt Izzy. He thought she was adorable and wanted to give her a chance at the best life possible.

He enlisted the help of his daughter, Kristin Chapron, to drive to the shelter to see if they could get her. As it turned out, they missed adopting her by minutes and the original adopters were just getting ready to take Izzy home. “We were devastated,” says Fredrick of not being able to get her then.

Life in a Full House

Now, this sweet girl has found a place to call her own. Between Frederick’s household of five dogs (including Izzy), and the six dogs among his two daughters’ households, Izzy has plenty of playmates to romp around with.

Izzy’s favorite pal is a recent adoptee Chapron found while camping. The new dog, Ellie, is now part of Chapron’s brood and she and Izzy are constant playmates, rolling around and playing in the grass.

And Izzy continues to push forward, despite being a tripod. If you ask Frederick, he’ll tell you that her sweet nature and mild manners, regardless of what she’s been through, keep him in awe of her every day.

“The missing leg does not stop her at all,” Frederick says of Izzy’s injury. “She gets out into the yard and runs with all the other dogs.”

Frederick and both his daughters are glad to have Izzy as a part of their lives now. Her will to survive and ability to overcome a missing leg has inspired their family.

“Her spirit has made us all realize you can do anything despite what has happened,” he says. “I realized you can’t let the bad times affect you and you’ve just got to keep pushing forward.”

Christina Chan covers a range of topics from health and wellness to pets. She’s fortunate to have her canine companion, Ellie the pug, snoring by her side during writing sessions. 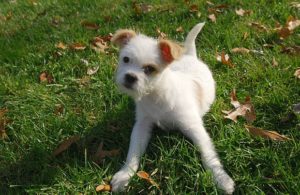 The Hardest Dog I Ever Had to Train? My Own.
Olive was going to be a shining example of my abilities as a trainer. She had other plans.
Up Next

Have You Seen the Bucket Video Yet?
A viral clip of animals drinking out of a bucket has become an unlikely internet sensation.