BeInspired / People X Pets / Cheech, the Dog with the Silly Smile, Wins Hearts and Gets Adopted

Cheech, the Dog with the Silly Smile, Wins Hearts and Gets Adopted

Who could resist that mug?

On October 19, the City of Waller Animal Shelter and Rescue in Texas took in a dog named Cheech who had a hilarious and memorable feature: one adorably goofy grin.

When the volunteer-run shelter (the only one in the county) started posting pictures of the “seriously sweet” Cheech and his unforgettable smile, which he gives on command, the comments and requests to adopt him started pouring in.

Within a few short days, the shelter began taking adoption applications for him, but gave the people what they wanted in the meantime: more pictures of Cheech.

While Cheech was certainly popular, he ultimately found the perfect new forever family and was adopted by a woman named Carrie.

The shelter posted on Facebook that after reviewing all the applications, Carrie’s stood out the most. As it turned out, Carrie had recently lost her beloved German Shepherd to cancer. Carrie’s other dog, Dusty, was depressed and not eating because he was missing his companion.

When Carrie and Dusty visited the shelter, “Cheech wanted nothing but to cuddle with her and Dusty,” the post read, adding that the adoption was simply meant to be. “Cheech needs this family as much as they need him.”

And, with that, everyone was smiling. Okay, and maybe crying a little bit, too.

Images via City of Waller Animal Shelter and Rescue Facebook 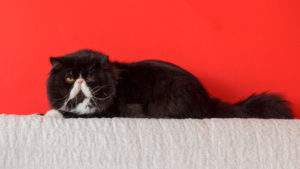 Funny Holiday Gifts for Cat Parents
Use this guide to find a funny gift that every cat lover will be sure to get a kick out of!