Armed with these facts, UK-based cat dad Chris Poole came up with a brilliant plan to combine the best of both: he made a maze entirely out of boxes for his cats Cole and Marmalade to play in. A maze made of 50 boxes, no less.

“I’d say their favorite things are boxes, just like most other cats out there,” Poole says. “So I figured a room full of boxes would be like kitty heaven!”

He was right, as evident in the two-minute video he posted that documents the construction of the massive (cardboard) undertaking in his very own living room.

Surprisingly, Poole says that it only took about an hour to build the maze and that it was all worth it to see Cole and Marmalade have fun. He says that Cole tended to “hop around like a bunny,” while Marmalade, “was like a mouse and mostly used the tunnels instead of jumping from box to box.”

To make the maze even more incentivizing, Poole scattered treats throughout for his kitties to find.

“It basically turned into a giant food puzzle,” he says. “They found all the cat treats and it was great enrichment for them to ‘hunt’ them all down.”

Of course, all those hours of playing and scavenging eventually tuckered them out.

“They played in it for a couple of hours before they needed to take a catnap, he says. “Cole was sleeping on top of it for a few hours.”

Since then, Poole has taken down the elaborate system of cardboard boxes in his living room, but the clip is here to stay. The now-viral sensation reached over a million hits in just a week’s time, and the numbers keep growing.

For cat parents who were inspired by Poole’s idea, he says that you don’t have to go quite as “crazy” as he did, but that using a few new boxes each week from the grocery store is great enrichment for your cats. 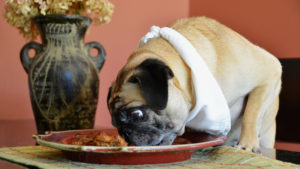 Pork Paw-t Roast DIY Dog Treat Recipe
Try your hand at this easy pork pot roast homemade dog biscuit recipe for a tasty DIY dog treat that your dog will love.
Up Next 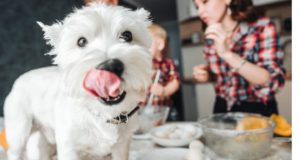 Homemade Dog Treats 101: Tips and Tricks to Try
Get the basic dos and don’ts of homemade dog treat making, as well as some helpful tips and tricks for a hassle-free baking experience.