When it comes to the atrocities of dog-fighting operations, justice will prevail.

Justice, a purebred Terrier, was brought to Best Friends Animal Society in October 2016 after being subject to illegal dog-fighting operations. Justice came to the sanctuary healed after spending time as a foster in California, but it was obvious that he suffered from terrible wounds, especially on his neck.

Dogs wrought with serious injuries from dog-fighting rings are assumed to have been used as “bait” dogs for the fighter dogs to practice attacking. It is said that owners would tie up the bait dogs or tape their mouth shut to prevent them from fighting back.

Justice was an unfortunate witness to the monstrosities of dog fighting firsthand—so it was no wonder that Justice’s demeanor was shy and hesitant once he arrived at Best Friends Animal Society. He arrived in a group of six other dogs who were also involved in dog fighting—and Justice, the last to arrive, was by far the shyest of the bunch.

To break the ice, caregivers would feed Justice treats and shower him with love. After some time with the volunteers, Justice started to trust that nice people were all around him, and his personality began to truly shine through. His caregivers say that once you gain his trust, his whole body will wiggle and he will let out happy yelps. Justice loved to run and jump on his caregivers for kisses and hugs, and enjoyed spending time on their laps. It wasn’t just the humans that Justice started warming up to—he also enjoyed spending time with his sanctuary pup pals during playdates and on long walks.

Justice found his happy ending when he was adopted in December 2016 by a family who fell head over heels for the loving Terrier. It was a dream come true for the new owners, who were so appreciative for the kind individuals and groups who helped give Justice the life he deserves. 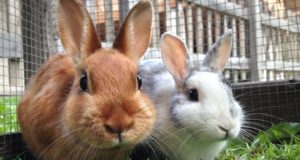 Rabbit Rescue: These Organizations are Committed To Saving Lives
While dog and cat rescues typically receive the most exposure, rabbit adoption unfortunately goes overlooked.
Up Next

Innovative Pet Adoption Events
Discover innovative adoption events happening around the nation. Cat yoga and cat cafes are just a couple of innovative ways shelters are getting people to adopt.