About 800,000 federal employees were furloughed or worked without pay during the partial government shutdown earlier this year. For many, going without a paycheck during those 35 days meant not being able to afford basic necessities, including food and other supplies for their pets.

Pet supply retailer Chewy teamed up with GreaterGood.org’s Rescue Bank to provide pet food and supplies to those in need. Chewy donated more than 100,000 pounds of pet food and supplies which Rescue Bank, through its regional affiliates, has been distributing at local events and through food pantry services across the country, including Arizona, Florida and Kentucky.

In addition, Chewy donated nearly 1,000 pounds of pet food to the Humane Society of Broward County to help government workers.

The donated pet supplies came from Chewy fulfillment centers in Goodyear, Arizona; Dallas-Fort Worth, Texas; Wilkes-Barre, Pennsylvania; and Clayton, Indiana, as well as from Chewy’s main headquarters in South Florida.

“We’re over the moon with the donations from Chewy’s fulfillment centers,” says Elizabeth Asher, executive director of Rescue Bank. “We always say food is the most expensive resource, so by alleviating that as an expense, it frees up so many resources to help keep animals out of the shelter and [helps families] take care of vet bills.”

It Started With a Student

The charitable initiative all started when Rescue Bank connected with Amber and Cody Allen, a mother and son from Tucson, Arizona.

Cody, a high school senior, is the founder of a nonprofit dedicated to the welfare of people and animals. Called Cody’s Friends, the organization coordinates pet supply donations for local Tucson communities.

“In elementary school, I did a project on John F. Kennedy and was inspired by a line from one of his famous speeches: ‘Ask not what your country can do for you, but what you can do for your country,’” Cody explains. “I wanted to do something in Tucson, Arizona, and I always loved animals, so I decided to help animals.”

Cody’s mom, Amber, had been receiving calls from local federal workers asking if Cody’s Friends had donations available. When Amber realized the large number of people in need, she and Cody took action to host a large event in their hometown.

Amber reached out to Asher from Rescue Bank who then arranged to have a donation truck sent over from Chewy’s fulfillment center in Arizona.

“Amber just has a huge heart,” Asher says. “She emailed me saying that she is having a food distribution for federal employees. Then we got Chewy involved. That got the ball rolling.”

Lending a “Paw” to Families Across the Country

Chewy’s donated items have been distributed to families in need across the country through events in Arizona, Florida and Kentucky. In addition, some donations are being distributed through food bank services.

The first donation event was held Jan. 26, 2019, by Cody’s Friends in Tucson, Arizona. It aimed to help government employees, although anyone in need of pet food or supplies was welcome to attend.

“Our main concern was that the animals would be turned over to the shelter,” Amber says. “We were willing to do anything to prevent that.”

Chewy was among the major distributors to donate products for the event, with its Goodyear fulfillment center providing 14,000 pounds of pet food.

“We were surprised at how much was donated,” Amber says. “We couldn’t have done it without Chewy.”

The event ended up helping hundreds of families.

“More than 280 federal workers and families in need came [to the event]. Some of them even brought their pets,” Amber says. “People were overly grateful to us and were surprised at the kind of level we were at and the professionalism … No one had to wait long, [and] the event was handled well.”

“A lot of [federal] employees were reduced to tears that we were able to provide food for their animals,” she adds. “It made us realize the number of people in this country affected by this.”

A federal worker, who preferred to stay anonymous, expressed immense gratitude for the donations.

“I have several dogs,” the federal worker said during the event. “You don’t know how much of a help this is to me. People think the shutdown is over, but I haven’t officially been called back to work yet. I don’t consider it over until I get a paycheck. We’ve already exhausted all our savings. Thank you.”

The next event was hosted by The Pet Project in South Florida.

The Pet Project provides pet food, pet supplies and helps with vet care, fostering and adoptions to those who are financially challenged due to illness, disability, aging, unemployment and victims of crime so they can keep their pets, says executive director Sue Martino. Their event was held Feb. 2, 2019, at their facility in Wilton Manors, Florida.

Like Amber, Martino received many calls asking for help with pet food and supplies during the government shutdown. Martino reached out to Asher at Rescue Bank who then worked with Chewy to obtain donations. In the end, Chewy sent more than 20,000 pounds of pet products to The Pet Project for their event.

The donations helped a total of 189 people, according to Martino.

“It exceeded our expectations as many more people came for the food than we thought would,” Martino says. “The donated food was great, and everyone who showed up received food and supplies. Everyone was so very thankful; it was a huge success.”

Chrissy Dillow, the founder of Tri-State Spay & Neuter, explains how the event was put together: “When the government shutdown stretched on, I realized we were going to have to do something… I reached out to the director of our county’s food pantry to see if she had any contacts. I then reached out to my rescue contacts who put me in touch with Rescue Bank who put me in contact with Chewy.com.”

Unfortunately, due to inclement weather, the event had a lower turnout than expected. But the ones who did make it were grateful.

“The federal workers were extremely appreciative of the donation … The donations from Chewy far exceeded our expectations—the volunteers who helped unload the truck and sort the supplies were all in amazement,” Dillow says. “We’ve been a Chewy partner for the past year, so the volunteers were aware that Chewy helped rescues but were blown away by sheer number of donations.”

In addition to events, Chewy donated 40,000 pounds of pet food and supplies to the Foodbank of South Eastern Virginia and the Eastern Shore in Norfolk, Virginia. Donations are currently available for pickup on Mondays from 9 a.m.-11 a.m. and Thursdays from 4 p.m.-6 p.m. 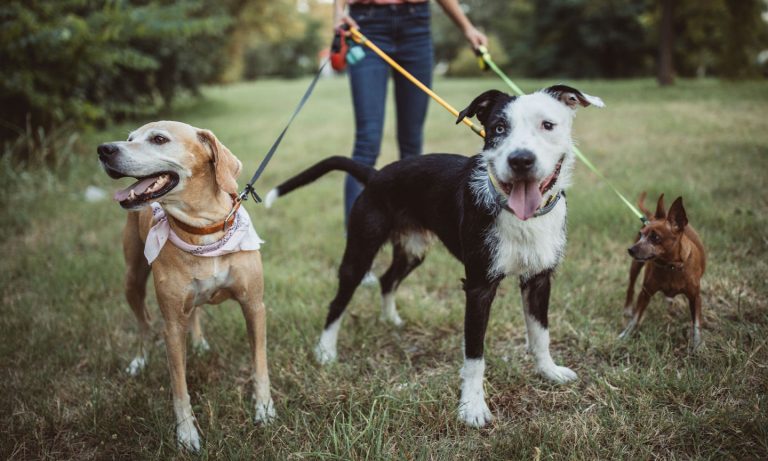 6 Dog Leash Styles and Their Functions
With so many dog leash options out there, shopping for one can be overwhelming. Use this guide to learn about six main styles of dog leashes and their uses.
Up Next

Rabbit Adoption: Everything to Know About Adopting a Rabbit
If you’re thinking about rabbit adoption, check out these care tips and a rundown of rabbit supplies to have on hand to maximize your new pet’s comfort.