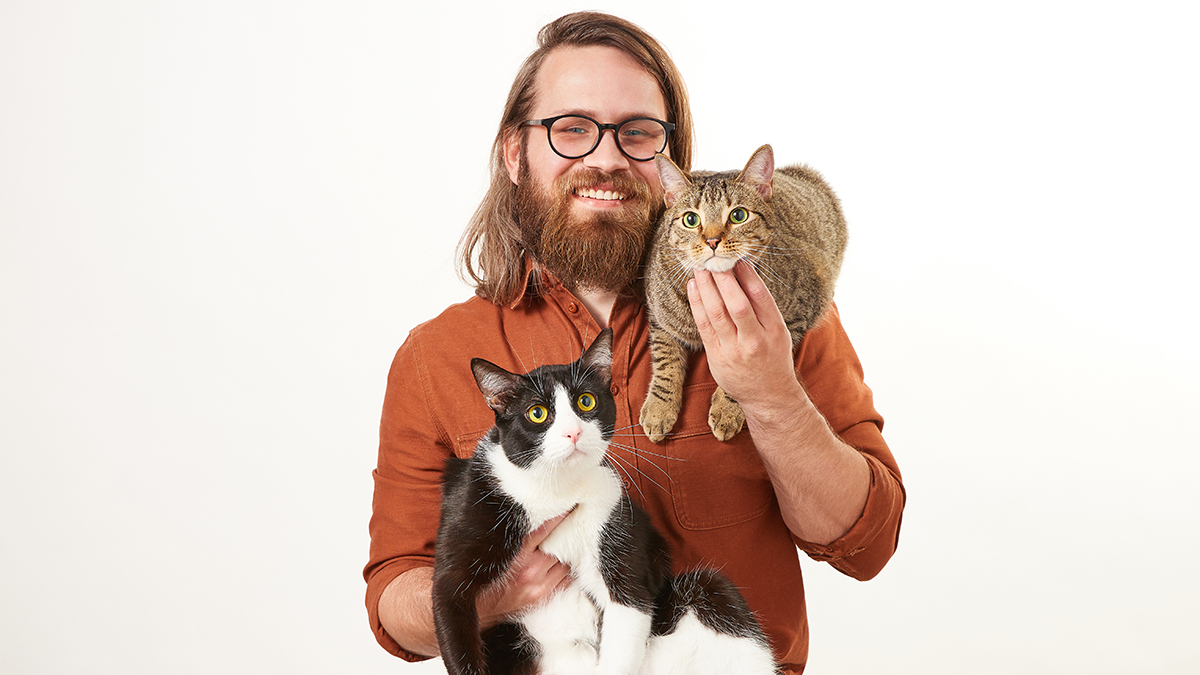 At Chewy, we’re passionate about pets. Just ask any of our pet-loving employees, like Shane Sheets. By day Sheets is a marketing coordinator who works at our Chewy headquarters in Dania Beach, Florida. But by night, he is Cat Dad Extraordinaire to his two cats, Sushi and Sashimi.

Sushi and Sashimi are your typical cats, according to Sheets. They love window watching, claiming their territory and cuddling (when they feel like it!). And Sheets is like most cat parents. He loves to spoil his fur kids, quietly freaks out when they give him attention and knows exactly what they like and don’t like.

Sushi, a black-and-white tuxedo cat, is your classic cat, according to Sheets.

“He plays hard-to-get and pretends to be uninterested,” he says. “He loves attention, but it has to be on his time, usually right before he goes to bed.”

Sheets admits Sushi is the lazier one out of the two who loves hanging out in his cat tree. When the 4-year-old cat does get active—thanks to Sashimi pouncing on him!—Sheets says he tires out quickly.

When 2-year-old Sashimi, a gray tabby, isn’t pouncing on her brother, she loves to snuggle.

“Sashimi really is a big cuddler. She is my alarm clock in the morning,” Sheets says. “At 7:30 a.m., she will start kneading on me, mostly because she wants food, but I pretend it’s because she wants to cuddle with me.”

“She can catch the teaser toy like it’s nothing and loves to play fetch and brings the toy back no matter how far it’s thrown,” Sheets says.

When it comes to getting the right cat supplies to care for his cats, Sheets now has it down to a science. From cat food to cat toys, Sheets tells us what products he must always have at home in order to stay on his cats’ good side.

“We’ve tried a few litters, and [both cats] get really curious with litters,” Sheets says. “Sashimi gets in the litter and feels it out. If she doesn’t like it, she immediately kicks [the litter] out.”

So, when Sashimi didn’t kick this one out, Sheets knew this was a winner.

“We like [this] unscented litter because it doesn’t add a fragrance, but [it] has great odor control, especially for two cats,” he says.

Sheets usually turns to PetSafe’s Bolt laser toy when he’s busy, like working on his computer, and can’t pay attention to the cats. It has an automatic mode in which the laser moves by itself in different patterns for hands-free play.

“We usually aim it at a wall where there is nothing but an open space, so they don’t knock things over,” he says. “They both love this toy, but Sashimi goes crazy [for it]. Sushi quits early on, [but] Sashimi won’t stop.”

Sheets has tried different cat food formulas in the past, but Sushi and Sashimi both seem to like this one the best.

Sheets also gives his two cats wet food once a day. But instead of sticking with one type of wet food, he rotates between three different kinds that the cats love.

Out of the three wet foods Sheets gives his cats, this variety pack is the one the cats get the most.

“The variety pack is nice because it gives them different flavors every day,” Sheets says. “They both gobble it right up.”

They seem to enjoy the minced poultry over the minced seafood. But at the end of the day, what they really love the most is the gravy, Sheets admits.

You know when you decide to treat yourself and splurge at a really nice restaurant? Well, if cats could do that, they’d head to Miko to get some fancy feline cuisine.

“I call this a fine-dining experience for them … This [cat food] is brothy and has whole foods so you can see the ingredients,” Sheets says. “It’s a little more premium, so when I feel like spoiling them a bit, I whip it out.”

The third wet food Sheets swears by is the Tiny Tiger variety pack (with gravy, of course!).

“We feed this to them twice a week as a weekend treat to switch it up,” Sheets says. “It has a similar texture [to their regular wet food], but different protein. Plus, it [has] extra gravy, which they love.”

Sheets also likes this cat litter box because Sushi is infamous for kicking the litter around after he goes to the bathroom. The high sides prevent the litter from going on the floor.

Bergan’s Turbo cat scratcher toy has been a blessing for Sheets’ home—and furniture!

Sheets and his girlfriend told us they started looking for scratcher toys when the cats started ruining furniture.

“When they ruined our favorite vintage chair, we knew we needed a solution,” Sheets says. “This is the solution that works for us at home.”

Whenever Sushi and Sashimi need to get their scratch on, they know where to go. For example, “whenever we cut their nails, they head straight to this scratcher toy,” Sheets says.

“Sushi is in this tower all day, every day,” Sheets says. “This is literally Sushi’s throne. He loves going to the very top and curling up on it.”

Sashimi has to wait for the perfect moment to get a taste of the royal life. As soon as Sushi gets up, Sheets says Sashimi hops right up to take her seat on the throne, however brief of a reign it may be.

Like many cats, Sheets’ cats are not particularly fond of wearing full-on outfits, so Frisco’s tie collar is his way of dressing them up. This is their fancy collar, Sheet says, and Sushi in particular looks quite formal in it thanks to his tuxedo fur pattern.

“When we put this on, he looks like [he’s] a cat running for president,” Sheets says. “We don’t put it on all the time, but it’s our way of dressing of him up. He looks super dapper in it.”

Sashimi goes nuts whenever Sheets takes this feather toy out. Sashimi loves it so much that she’s even found a way to pull it out of the drawer all on her own!

“She literally learned how to open this drawer just to show us she wants to play with this feather toy,” Sheets says.

Like any pet parent, Sheets wants to help keep his pets healthy, and that means caring for their teeth. That’s one of the reasons why he gives his cats Greenies catnip-flavored dental treats every other day. The other reason? His cats love them!

“We tried this one first and they loved these ones immediately,” he says. “With cats, if you know something works for them, and its good quality, you want to stick with it.”

Rabbit Names
Once you bring a rabbit (or two) home, along with all of the necessary bunny supplies to house your new indoor rabbit, the next step is to name your new pet. If you got your rabbit from a shelter or rescue, it’s likely he has a name, but it’s your choice whether or not to rename your pet.
Up Next 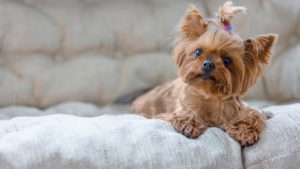 7 Dog Toys for Small Dog Breeds
If you’ve got a small dog, then you know that their playful personalities outweigh their size! Find out eight dog toys made for small pups who just wanna have fun.