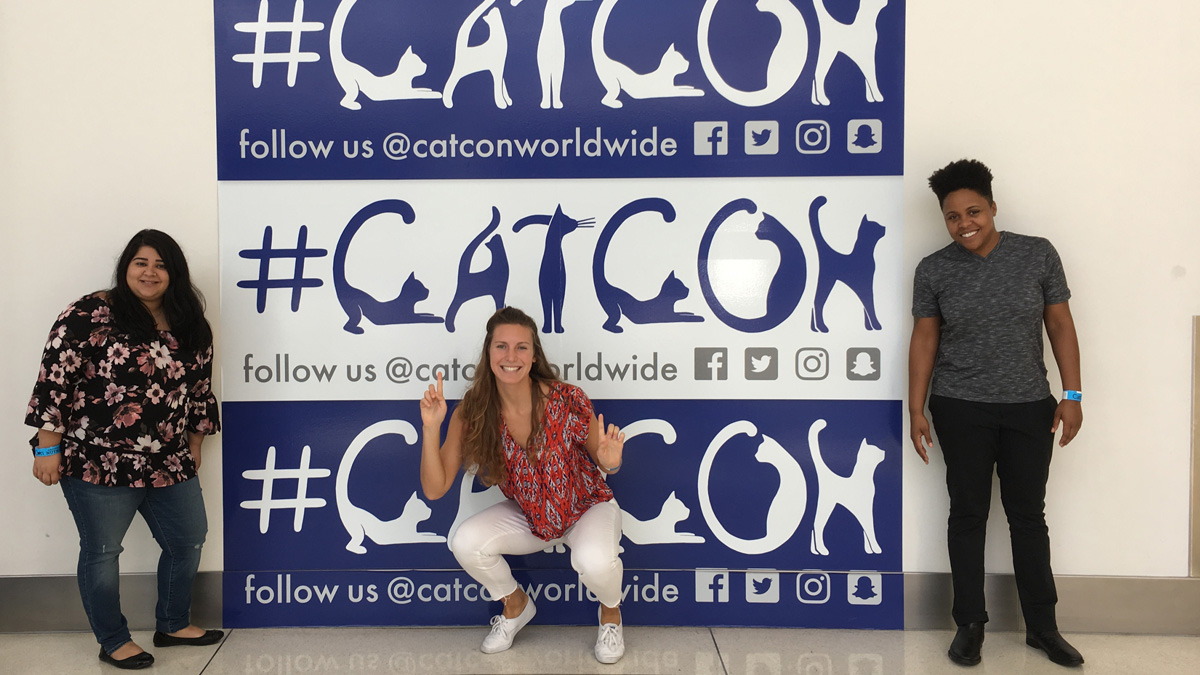 If you’re a true kitty fanatic, you may have heard of the annual cat celebration that brings together thousands of cat lovers, celebrities, and of course, actual cats looking for a feline-friendly family to adopt them. This year’s CatCon, presented by Rachael Ray Nutrish, took place August 12th and 13th, 2017, at the Pasadena Convention Center in Southern California, where close to 150 different brands had the chance to feature their most innovative and creative products specially designed for our furry feline friends.

CatCon is more than just a marketplace for customers—its aim is to attract the huge community of cat lovers coming from all corners of the U.S. and give them the opportunity to meet firsthand the social media stars they admire and the brands they’ve grown to love.

This year we decided to send three members of our own Chewy pack to mingle with the crowds of endless cat ears and furry tails. Here’s an inside peek at all the cat-astic-ness:

As early as 6 a.m., a line of cat ears and whiskers were already forming at the doors of the convention center. An outside observer might have perceived the feline-disguised humans as eager trick-or-treaters who showed up a few months too early, but the majority of Pasadena pedestrians were well-informed about the weekend convention, and even more still had come specifically to attend the event.

The sea of cat lovers strolling past the booths in the immense center were decked out in every possible kind of cat swag you can imagine—cat ears of all shapes and sizes, tails of all lengths and colors, dresses featuring paw prints, and suits featuring cat faces. Even the few attendants who did not disguise themselves as cats still supported their favorite online cat influencers in one way or another to share the feline love that filled the air of the Pasadena convention. One thing’s for sure: while dressing “normally” was one way to stand out for this event, it was definitely not the cool thing to do!

If you’ve ever thought up a “new” cat product in your mind, chances are it exists and was available for purchase at CatCon. One of our Chewy influencers, Jamie Revill (@pocketsandboots) admitted that even she was blown away by the number of vendors and the variety of products. “It was cool to have heavy metal cat items next to kawaii cat plushies,” Jamie tells us. Indeed, each booth featured products so distinct from those of its next-door neighbor that it was easy to get carried away spending hours just perusing the rows of booths.

Products included caticatures, kitten fountains, high-tech virtual reality cat games and goggles, high-end cat furniture, cat couture, robot cat litters, and that’s just the first aisle. When we asked Jamie what her takeaway from CatCon was, she immediately answered: “too many purchases!” Even though she was only half-joking, her answer is a true testament to the high quality, irresistibility and the variety of cat goods that were up for sale at CatCon!

Who would have thought that a cat panel could bring together people of different ages, nationalities and professional backgrounds in honor of their common love for cats? Gilles Marini, a French-American actor known for his role in the film Sex and the City, and Jonathan Zurbel, a DJ based in Miami, FL, were both on the panel, candidly having conversations about Gilles’ Persian Teacup and Jonathan’s cat, Samson (a hulking 28-pound furball). With two social media celebrities in the mix as well—Chris Poole and Mike Bridavsky (owner of the famous cat, Lil’ Bub)—the panel offered the perfect balance of animal-centric celebrities.

Cats Too Cute to Resist

It wouldn’t be a true cat convention without the presence of our favorite furry friends. That’s why this year’s CatCon had a special section where participants could interact with cats and kittens of all breeds and sizes, many of whom were welcomed into a new home by the end of the weekend. Together with the event’s sponsor (Rachael Ray Nutrish), who promised a year of free food to anyone who adopted an adult cat, the Society for the Prevention of Cruelty to Animals in Los Angeles (spcaLA) was able to complete 97 adoptions in the span of two days—nearly double last year’s figure!

Though you wouldn’t be able to tell from the huge crowd of cat lovers at CatCon, there are still too many free-roaming and homeless cats in LA and not enough cat lovers to adopt them all. Exiting the halls of the convention, it was heartwarming to see the overwhelming joy and smiles on people’s faces as they held carriers with their new furry family member. It definitely wasn’t a challenge to get these kitties out of their temporary convention cages and into the arms of their new loving parents.

Our biggest take away from CatCon was undoubtedly that the tight-knit community of cat lovers is like no other. Jamie hit the nail on the head when we asked about her impressions of the event: “It’s an amazingly kind community of creative and fun individuals. It was great being around so many like-minded people.” The beauty of the cat lover community is that it attracts people of all different backgrounds and ages, yet their love for kitties and positivity unites them regardless of their differences.

“There is definitely something for every type of cat lover,” says Jamie, which is exactly what we observed when scanning the diverse cat crowd in the massive convention hall. The energy the crowd brought with it was both inspiring and contagious, so much so that we would jump at the opportunity to attend another CatCon in the future!

Having recently moved from rainy Oregon to the sunshine state, Anastasiya Chevtchenko spends her time catching rays by the beach, playing soccer with the locals, and embracing pet heaven – Chewy. A recent Penn graduate, Anastasiya works in Marketing where she hopes to bring in her expertise in international relations to expand the business. When she’s not facetiming her international friends or reading the news in five languages, Anastasiya spends her time working on PR projects, social media brand posts, and writing for Chewy’s Pet Central blog.

Bird Chirps iPhone Ringtone To Get Attention
A cockatiel has started imitating the iPhone ringtone to get his owner’s attention, as seen in a video posted to Vimeo by Ben Pluimer.
Up Next