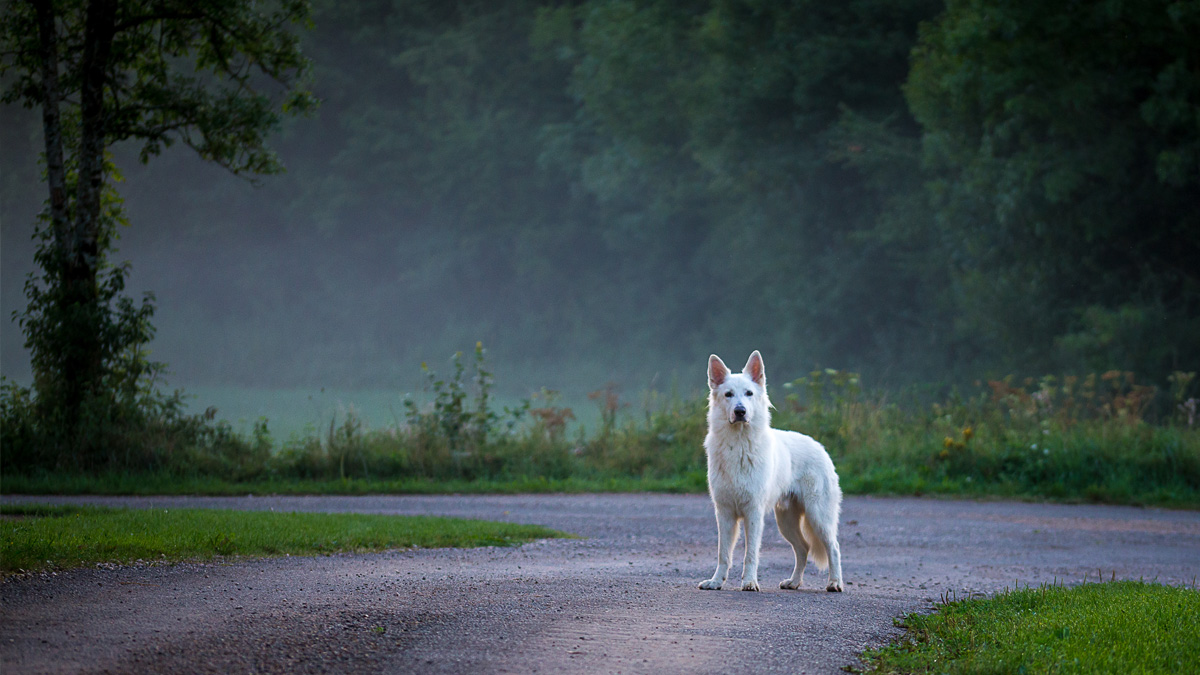 It’s 3:15 a.m., and you wake to a strange whining sound from the other side of the house. You go to investigate, and your dog—a brave little Chihuahua—is staring down a long dark hallway, quivering in her coat. It seems your dog is suddenly scared of something in the house.

You wonder, “Can dogs see ghosts?”

Dogs do all kinds of strange things that we humans don’t quite understand—including sensing things that we don’t. It’s difficult to unequivocally prove that ghosts, spirits and other paranormal entities exist, but that keen canine perception can be pretty convincing.

When it comes to whether pets can see into the paranormal realm, it all depends on who you ask.

Karen Anderson, a professional animal communicator, psychic and medium based in Elk, Washington, says pets can most definitely interact with the spirit world.

“Dogs can absolutely see spirits,” says Anderson, who claims she can communicate telepathically with dogs and cats. “It can be a human, another animal, sometimes non-human, like angelic energies that are around. But, just like humans, some pets are very tuned in and more sensitive, and others don’t have a clue. Every animal is different.”

The ones that are more tuned in use their specialized senses to pick up on spirit energy, she says.

“Dogs can see the spirits with their eyes because they have the ability to see things that we can’t,” Anderson says. “And they can hear things we can’t, so they can pick up the energy that way, too.”

But are they seeing ghosts or normal things that us humans simply can’t with our duller senses?

Belle Marie Nibblett, DVM, a board-certified small animal internal medicine specialist with Oregon Veterinary Referral Associates in Eugene, says that, when compared to humans, dogs do have a heightened ability to smell, see, hear and feel—which could, in theory, help them sense otherworldly visitors.

But can dogs “smell” ghosts? Probably not, she says.

“If you are fearful of something, though, your dog will know through your pheromones,” she says.

As for hearing, a dog’s ability to hear higher frequencies than a human is well known. Think of the classic dog whistle—the dog can hear it, but humans can’t, says Dr. Nibblett, noting we can hear between 64 Hz–23 kHz, whereas dogs can hear between 67 Hz–45 kHz.

That’s significant, but even more interesting is that dogs can focus on a particular sound.

“Dogs have a better ability to focus on a specific sound that they’re hearing and, essentially, block out other sounds,” Dr. Nibblett says.

When it comes to vision, dogs can only see in the blue/violet and red spectrums, but they excel at seeing movement—particularly subtle movement, Dr. Nibblett says. They also have very sensitive night vision, she says.

“Dogs’ sense of sight developed around them being predators,” she says. “They needed that ability to see movement and motion in order to catch their prey. Everything is developed for seeing things that move.”

“Their whiskers—vibrissae—have a tremendous sensory input,” she says. “They can feel the slightest bit of movement in the air, sending a message to the brain about the animal’s distance from the given object.”

Spirit energy, Anderson says, sometimes appears as visible orbs or shadows that fly across the room or pass through your peripheral vision, so dogs’ extra-sensitive motion-detector eyes might allow them to see subtle ghostly movement.

“The orbs will shoot by with lightning speed, day and night,” she says. “And the shadows, they’ll appear like a bullet out of the corner of your eye. Sometimes it’s like, ‘Did I really just see that?’”

So, what’s the truth? Can dogs see ghosts? Or are they just sensing everyday objects and sounds that we can’t. If it seems like it could go either way, that’s because, well, it can‑at least, according to Jordan F. Slavik, an instructor at the University of Maryland who is currently working towards his PhD in philosophy.

“The most honest scientific answer to whether or not dogs can sense the paranormal is that we simply don’t know,” he says. “Much like ghosts or spirits themselves, science can neither completely prove or disprove such a claim—at least not yet.”

Signs Your Dogs Can Sense the Supernatural

Because most of us are unable to communicate with our four-legged friends telepathically, how can we tell if our dogs have a sixth sense? Anderson says to look for these three clues:

1. Staring down a hallway, wall or corner.

“The number one clue that there’s something present is that your pet will stare up into the corner of a room at nothing,” Anderson says. “Upper corners of rooms are energy vortexes. Energy collects there like a dust bunny under your couch. So, you’ll see the pet staring up in the corner, or your dog will look up and start barking.”

“Dogs are a lot more demonstrative in telling us, “Hey, there’s something here,” Anderson says.

They will start barking, whining, growling; they might even scratch or become defensive and start backing down the hallway or back away from a room or a door, she says.

3. Being fearful of or drawn to certain rooms or areas of your home.

What to Do if You Think Your Dog Sees a Ghost

If you think your dog sees a ghost, don’t panic! Anderson says it’s likely a friend or loved one stopping by for a visit.

“It takes a lot energy for the spirits to show up,” Anderson says. “When they do show up, they’re not trying to scare you or your dog. It’s usually a loved one, human or a pet.”

First of all, she says, if your dog senses a spirit and it’s scaring him, remember that you are in control—of the dog and the ghost.

“Tell the spirit to knock it off and stop scaring your dog or cat,” Anderson says.

Speak to your dog calmly if he’s frightened, she says.

“Say, ‘Good boy, good girl for telling me there’s someone here,’” Anderson says. “Don’t get on them for alerting you, because they’re doing what they’re supposed to do—they’re protecting you and letting you know that there’s something there.”

You can perform a cleansing ritual of some kind, too, she says.

“Say some prayers, burn sage, use holy water, or try green fire to help eliminate negative energies and entities,” Anderson says. “There are all kinds of rituals you can do at home.”

In addition, you should rule out any medical anomaly that could be causing your dog’s odd behavior, says Dr. Nibblett.

“Dogs and cats can have partial motor seizures that cause fly-snapping behavior, staring off at nothing or watching something that’s not there,” she says. “They can cause abnormal brain activity.”

Dogs can also develop Cushing’s disease, which is an endocrine disorder, high blood pressure and other conditions that could cause abnormal sleep patterns and anxiety-related disorders, she adds.

“If you see that behavior one time, that’s not a big deal; if you see it over and over again, or if it’s increasing in frequency, visit your veterinarian,” Dr. Nibblett says.

Also, take a look at things like flickering fluorescent lights and television screens, she says.

“Different lights might have vibrations that bother them,” she says. “So, be aware of those sorts of things that might be causing some distraction.”Using a product that contains a dog-appeasing pheromone can help, Dr. Nibblett says. Sentry’s calming collar for dogs, for example, uses a pheromone that mimics the calming pheromone released by a mother dog to quiet her puppies. It could help an anxious—or spooked—dog relax and feel at ease.

For more information, check out:
• Breaking Down Your Dog’s Body Language, to find out whether his behavior is abnormal or not.
• How to Calm a Nervous Dog, for especially nervous pups.
• 5 Weird Pet Fears and Why They Happen, in case something else may be scaring your pup.

Teach Your Dog to Stop Leash Pulling
Find out how to stop leash pulling by leash training your pooch, so your walks together can be fun, not frustrating.
Up Next 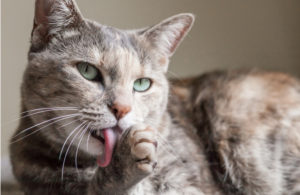 9 Things You Didn’t Know About Your Cat’s Grooming Habits
Find out why your cat spends most of her day grooming herself, and what's behind each lick, scratch, and nibble.