BeWell / Wellness / Why Does My Dog Stare at Me?

Why Does My Dog Stare at Me?

Among the most amusing and creepy dog behaviors is the dog stare: whether it’s directed at an owner, an unsuspecting guest or a steak dinner, there’s something about those knowing eyes that intrigues dog lovers. On YouTube alone, a search for “dog staring” turns up over 1.5 million results, a mix of the funny, the scary and the tear-jerking.

The Look of Love

The most likely explanation for that mysterious gaze is a warm-and-fuzzy one, says Mary Huntsberry, a Maryland-based certified applied animal behaviorist who runs the consulting service Helping Pets Behave. “People like to look at dogs, and dogs like to look at people, as long as they have a good relationship,” she says.

She cites a 2015 study that found that dogs and humans bond by looking into each other’s eyes. When gazing into the eyes of a dog, she says, the levels of oxytocin (a hormone that promotes social bonding) increases in both the person and the dog.

So, although you may think your dog is giving you the hairy eyeball, she may actually be demonstrating fondness and friendship. You can also tell what your dog is feeling by her posture, Huntsberry explains, which will be relaxed and non-fearful. Her ears will be up, her mouth may be open, and her tail will be in a neutral position.

However, you’ve probably noticed that your dog’s stare isn’t always the result of love and contentment.

“A lot of times it’s to communicate something,” Huntsberry says, adding that dogs might sometime stare at their owners if they want to go out, be fed, be petted, or play. “Through association, they learn that staring at their owners often results in a good outcome,” she says.

We can usually decode this kind of staring through context. For example, if you feed your dog at the same time every day, they’re likely to turn puppy-dog eyes on you around that time. Dogs also might fixate on people who have rewarded their staring in the past.

“It’s amazing how long [my dog] will stare at my husband,” Huntsberry says, “because he feeds her from the table and she’s learned that if she waits long enough, eventually there will be food given to her.”

And if your dog really wants something, they’ll often provide other cues to go along with their stare.

“When dogs get the urge to be playful, then they might look at you with something in their mouth, as if to say, very clearly, ‘Play with me now,’” Huntsberry says.

While dog stares are often loving or solicitous, they can occasionally signify more negative emotions–so be observant of the signals your dog is giving you.

“If your dog is afraid of you, they will watch you because they don’t trust you,” says Huntsberry. This may be more common with houseguests than owners, since some dogs are wary of strangers.

An indication that your dog’s gaze is rooted in fearful or untrusting feelings, she says, is if they assume a non-threatening or fearful posture (tail tucked, ears back) and keep their distance, but snap or growl if approached. They will also sometimes avoid direct eye contact.

While people-staring is more common, some dogs might fixate on inanimate objects, walls or shadows. This behavior may be amusing at first, but Huntsberry says that it can indicate serious issues, particularly if it becomes compulsive. Assuming there’s nothing behind the wall a dog might be staring at—no rodents or wildlife behind that are attracting the dog—it would be considered an abnormal behavior, she says.

This kind of staring, as well as staring into space, is sometimes attributed to floaters—the harmless little specks that float around in our vision—but it can also stem from abnormal brain activity, stress or other medical conditions. If you observe this type of behavior, it’s best to take your dog to the vet for a check up.

“It can interfere with the quality of life of the dog, because if they become obsessed, they can choose that behavior over other ones, like sleeping and eating and affection from the owner,” Huntsberry says.

If your pet’s staring problem is not a medical concern but creeps you out nonetheless, there are ways to curtail staring. Huntsberry suggests trying to catch the behavior early to prevent it from becoming routine. “They just get better at it,” she says. “It becomes part of a pattern that they keep repeating.”

She suggests interrupting the behavior and redirecting your dog to something else like dog treats, a toy or a bonding behavior, like petting or brushing. You don’t want to frighten the dog, she warns, adding that if your dog is staring out of fear or stress, getting upset at your pet will only make it worse. After enough positive redirection, your furry friend will likely be less set in his bug-eyed ways.

Another option? Try to recognize the staring for what it is: normal canine behavior. If your dog doesn’t seem fearful or stressed and is not exhibiting strange fixations, odds are good that he’s just chilling.

Maura McAndrew is a freelance writer based in Oklahoma. She also writes for Paste Magazine and HelloGiggles.

Bad Foods For Parrots
Foods such as alcohol, chocolate, avocado, uncooked meats and shellfish can be bad for your pet bird.
Up Next 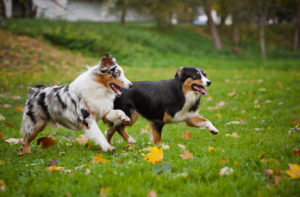 Real Life Dog Park Problems and How to Fix Them
We surveyed dog owners to hear their biggest dog park mistakes and asked experts to weigh in on how these situations can be avoided in the future.