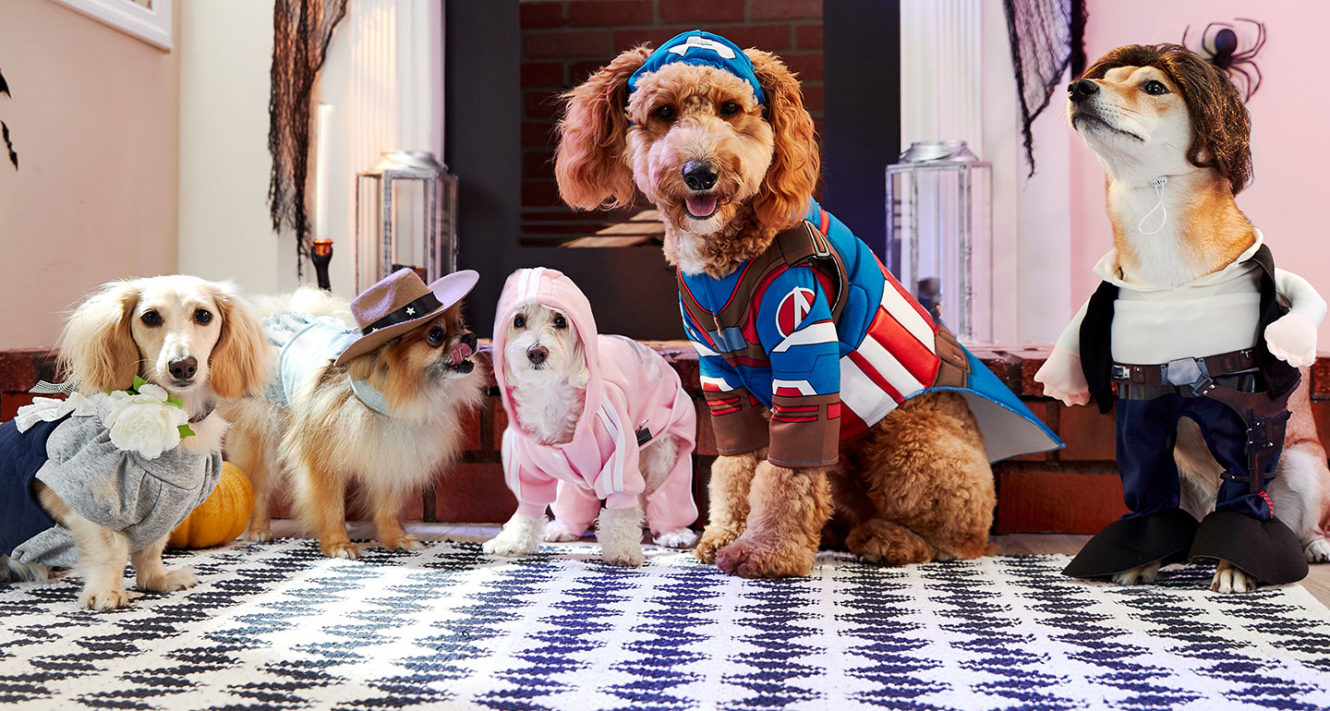 Are you a “Star Wars” trivia master? Do you have a favorite comic book character, and can you describe their origin story in extreme detail? Do you spend hours on Instagram, liking and following trend-setting social media influencers (both human and canine)? 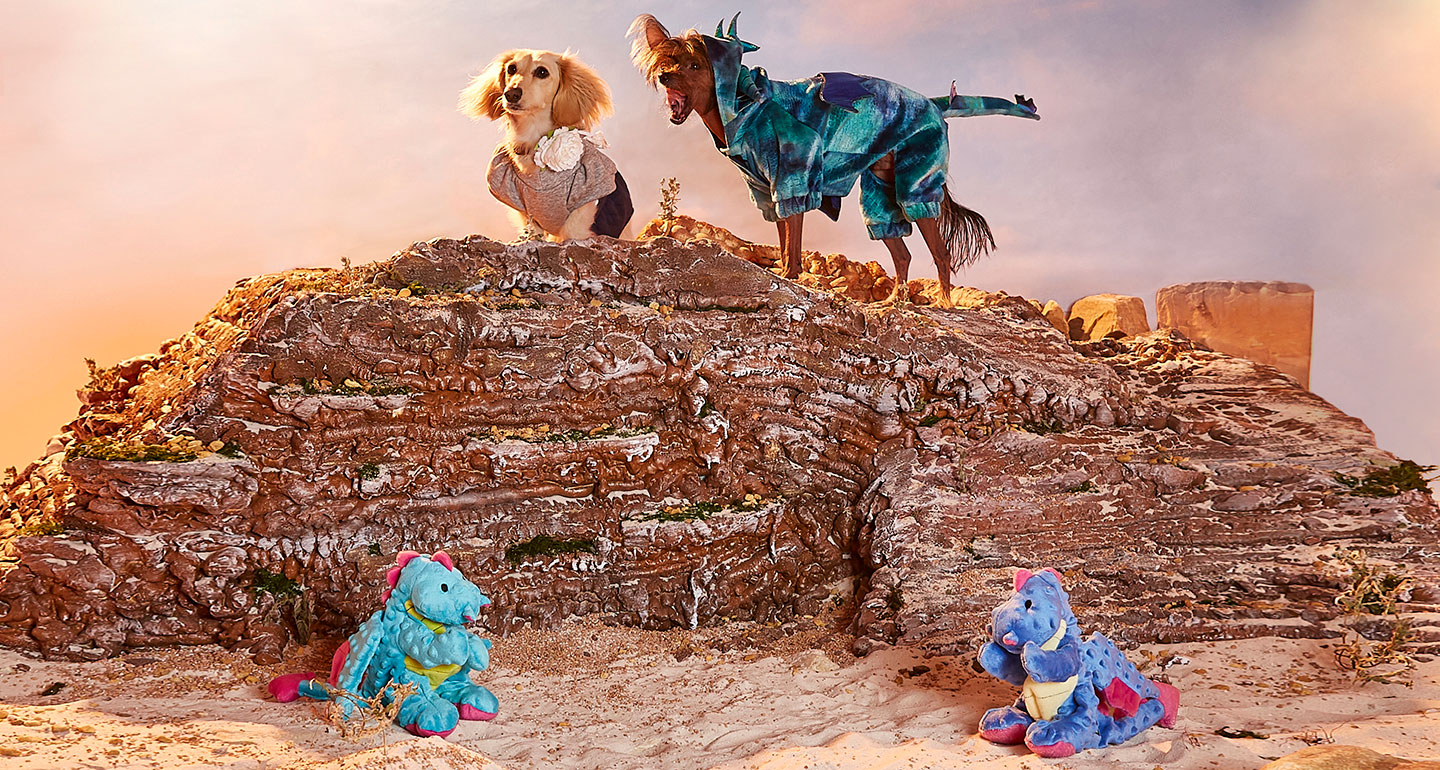 Your dog is the protector of your house. It’s only fitting to dress them as the protector of the seven kingdoms. For this look, we paired the Dobaz Winter Dog Dress with Frisco’s flower collar accessory. The dress, which features a turtleneck collar and navy quilted patchwork, is sure to keep your pup warm while trick-or-treating, especially if you live in cooler parts of the country. It’s casual enough to be worn all winter long as well. (Remember: Winter is coming!) The flower accessory adds a touch of softness to the otherwise fierce ensemble.

If you have other dogs, or family and friends with dogs, dress them up in Frisco’s dragon costume to complete the Mother of Dragons look. Otherwise, your regal pooch can carry around GoDog’s dragon chew toy.

A classic tale of good versus evil, “Star Wars” is an epic space opera loved by many. If you’re a fan of the franchise, then consider dressing up your dog in a “Star Wars” dog costume this Halloween.

He’s no Jedi, but Han Solo just might be the coolest character in the “Star Wars” universe. This Han Solo dog costume by Rubie’s Costume Company is perfect for a dog who has a penchant for bending the rules but who also means well. It’s a step-in costume that covers just the front half of your dog. From the front, your pup will look like Han, with two legs and two attached arms. The wig, which comes with an attached elastic strap, definitely adds to the Han Solo swagger.

Does your dog dabble more on the Dark Side of the Force? Rubie’s Costume Company’s Darth Vader dog costume might be more his speed. This officially licensed “Star Wars” dog costume includes a black shirt decorated with a chest piece, button panel and belt; a cape that attaches to the shoulders; and a domed hat. Who says villains can’t be cute? 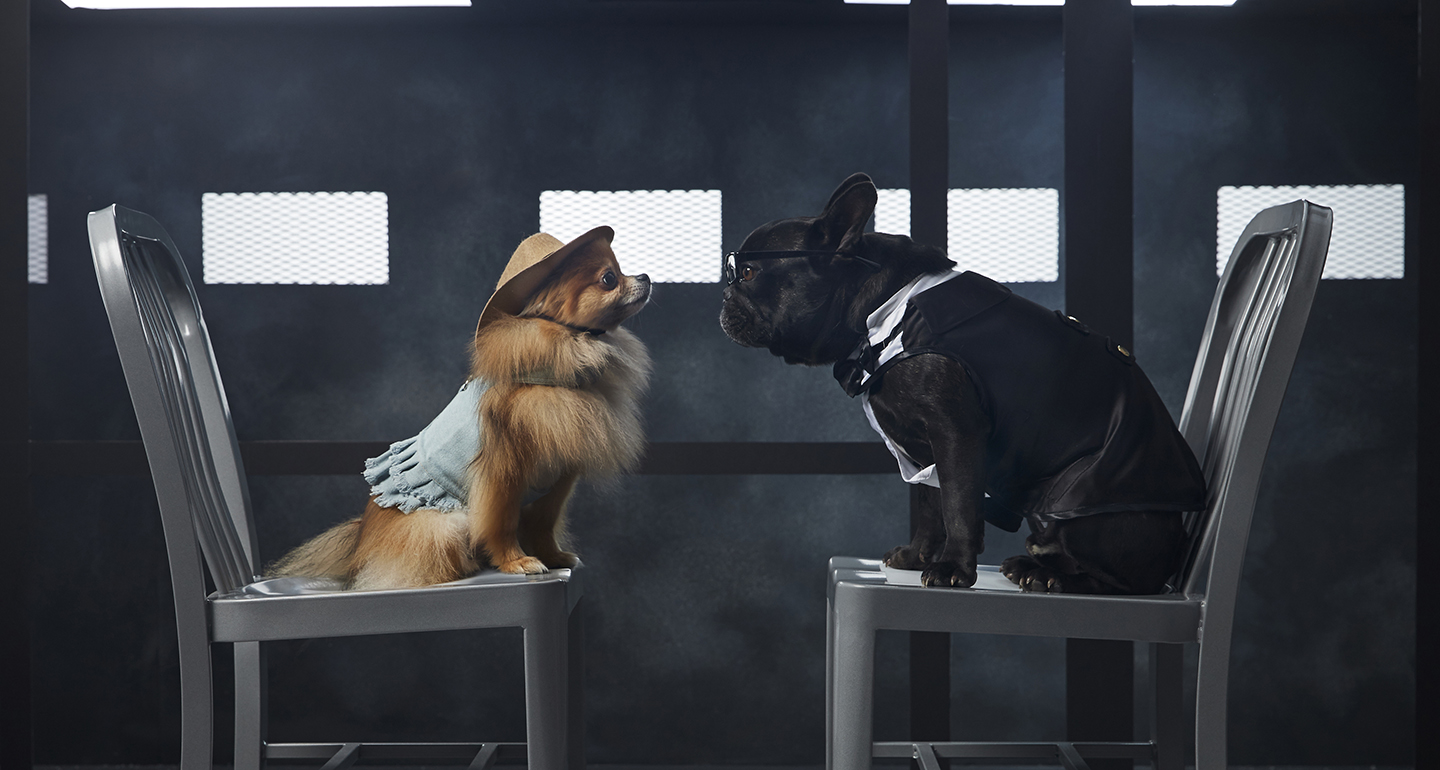 The Wild West was a dangerous place. It’s even more dangerous when you have a bunch of robotic hosts running around.

This Halloween, bring your favorite futuristic western characters to life with your four-legged friends. Doggles’ jean fringe dress and a cowboy hat make for a perfect doggy damsel in distress costume. Bonus: The dress doubles as a harness. For the theme park’s brilliant-yet-complicated director, Frisco’s formal dog tuxedo does the trick. Your dapper dog will look very pulled together in the black jacket with attached white shirt front and gold button accents—even though the character they’re imitating is a little unhinged. 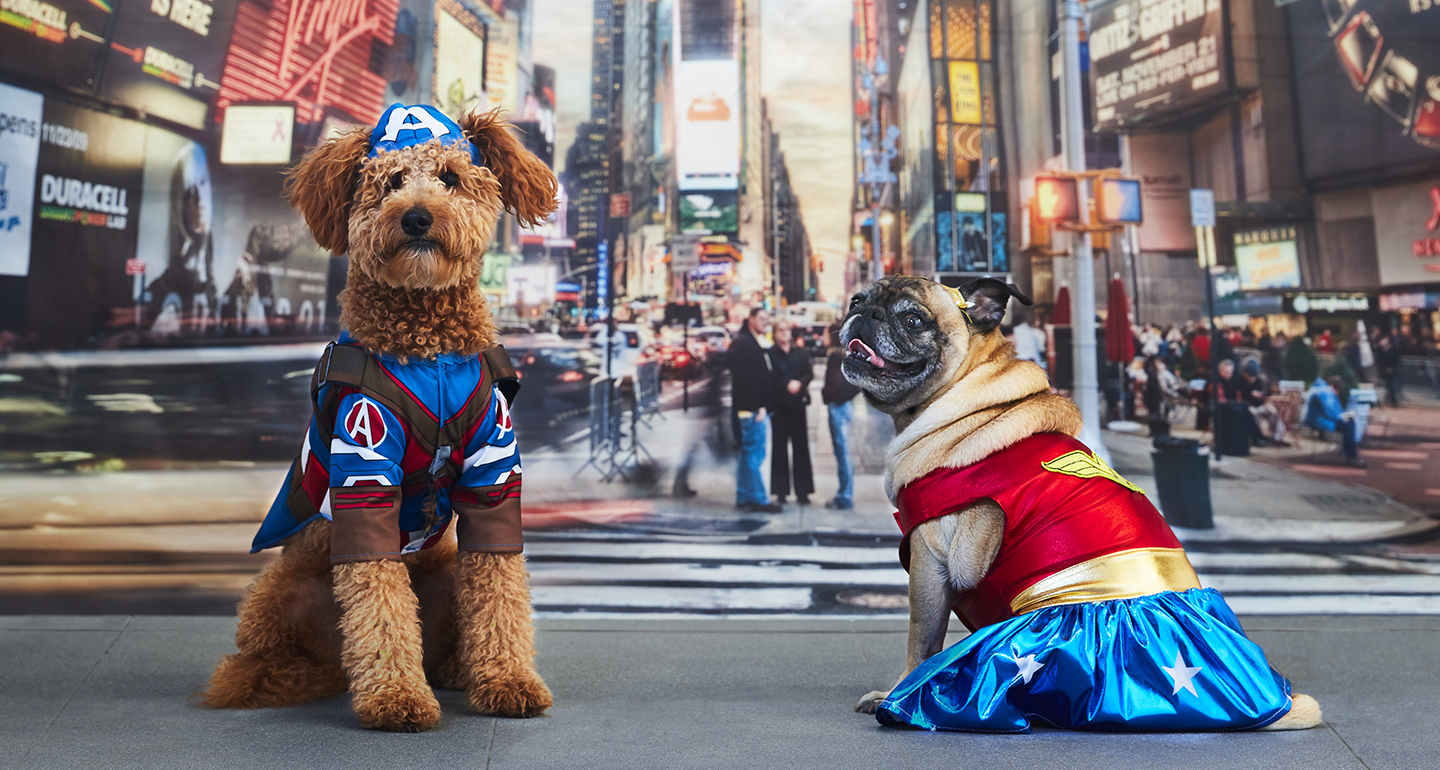 Dogs are the superheroes we really need. They are able to make us laugh in a single bound. They can’t be corrupted. They protect us from the dark forces that threaten to steal our happiness. (Somehow, sloppy kisses help make dealing with bills, work and the general public so much more manageable.)

Let the world know just how super your dog is by dressing them in an iconic dog superhero costume this Halloween.

Wonder Woman is described by DC Comics as “a beacon of hope to all who find themselves in need.” She’s a gift to humanity. Sound like a pup you know? Your brave canine companion will be an unbeatable warrior when they’re wearing the Rubie's Costume Company Wonder Woman dog costume. The two-piece dog superhero costume includes a red and blue dress with a large “WW” logo. A foam gold metallic tiara with a red star completes the look. 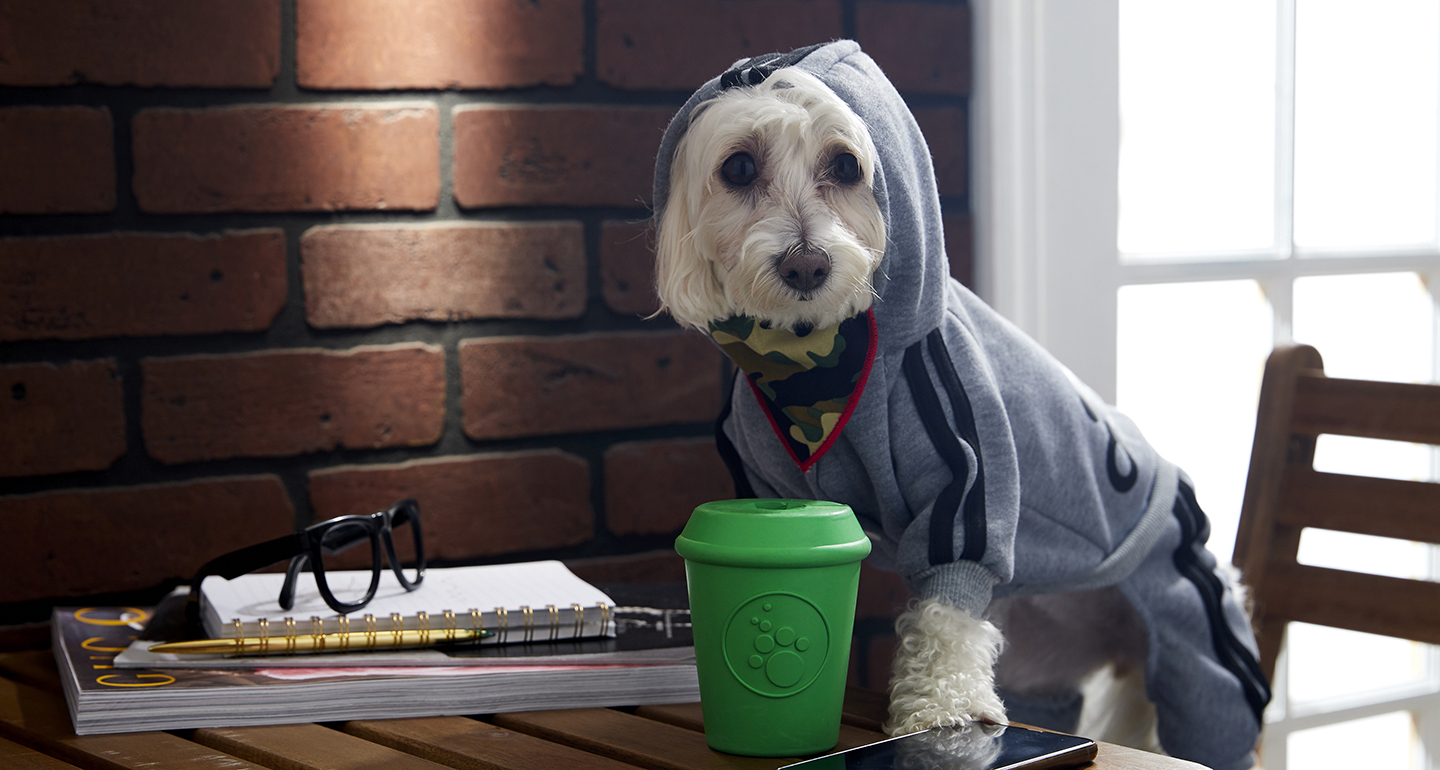 These days, it seems like every dog has his own Instagram account. And we’re not complaining. We love seeing photos and videos of adorable pups on social media.

Your dog may not be a bona fide social media star (yet!), but that doesn’t mean they can’t dress like one. It’s all about the trends with this Halloween costume. Adidog’s dog tracksuit, which comes in a variety of colors, is comfortable and sporty. It absolutely nails the athleisurewear trend. Another big trend on social media? Craft coffee. Accessorize your four-legged influencer with SodaPup’s coffee cup dog toy, which doubles as a treat dispenser.

Stephanie Brown, Senior Editor
Stephanie Brown is the Senior Editor of the Chewy blog, Pet Central. From a very young age she’s loved animals and has had the honor of sharing her life with many pets, from cats and dogs to parrots and guinea pigs. She is an award-winning journalist who has spent most of her career creating content about what she loves most in the world—pets. Her favorite pastime is thinking up new and ridiculous names to call her rescue cat, Luna. (For the record, they are Luna Moon, Looney, Tunes and Stink Butt.) 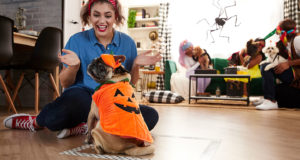 6 Halloween Party Games for Dogs and Cats
Keep guests entertained at your Halloween pet party with these fun Halloween games for pets.
Up Next 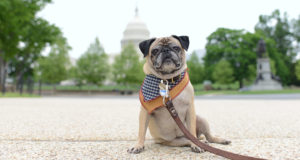