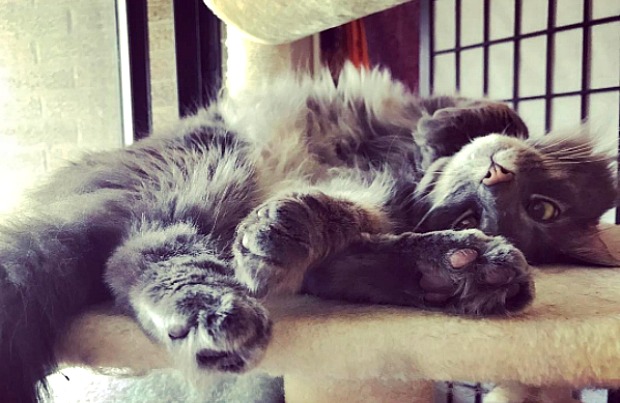 A Maine Coon mix with stunning green eyes, Booker was recently named one of the “Happiest Pets on Earth” in an Instagram contest—pretty impressive for a cat who, less than a year ago, was almost deemed unadoptable and had such severe fear and anxiety that the shelter where he was living was considering euthanasia.

Booker’s story starts in Wisconsin over a year and a half ago. Although the details of his early life are hazy, Julia Luebke, who adopted Booker in June 2016, knows for a fact that Booker was abandoned at least twice.

“We know he experienced some significant neglect at his first home when he was a kitten,” says Luebke. “His first owner was a young college student who made a habit out of not cleaning his litter box, so Booker did what cats do and found a clean place to relieve himself.” This behavior resulted in Booker being dropped at the nearest shelter.

The next family who adopted Booker had other pets and children, and he experienced some trauma there. After two failed adoptions, the future didn’t look bright for Booker, and the shelter was considering euthanizing him before another rescue stepped in.

“Due to his history with inappropriate urination and his traumatic experiences around other pets and children, most people overlooked him right away,” Luebke says. “The shelter recommended that he not live in a home with any other pets or with children, which deterred a lot of people.”

Even when Dane County Friends of Ferals rescue stepped in and Booker went into a foster home, things didn’t get better right away.

“His foster mom took him to a few adoption fairs, and he’d be the only cat not adopted at the end of the day, because he’d be nervous and withdrawn and hide, and people didn’t get to see his true personality,” says Luebke.

Luebke first saw Booker on the Dane County Friends of Ferals Facebook page in the beginning of 2016.

“I wasn’t in a pet friendly apartment at the time, and wasn’t moving until June, so I thought surely he’d be adopted by then.” says Luebke. “In May, I saw a post saying he was the only cat not adopted at the fair.”

Luebke couldn’t believe he hadn’t been adopted, so she called the shelter and asked about him.

“I had been looking for the right emotional support animal for months, as I have struggled with severe anxiety and depression myself for years – but none I had seen had really seemed right,” says Luebke. “But once I saw him and read about his personality, I knew he was perfect for me.”

After setting up a meeting with Booker’s foster mom, Luebke drove across the state to meet him and fell in love with him right away. She brought him home as soon as she moved.

Although Booker didn’t have any medical issues, he suffered from intense anxiety. Luebke says he would wake her up in the middle of the night crying and flailing around.

“He would be so terrified, he would urinate wherever he was sitting,” says Luebke. “If anyone moved too fast, he would run away and I would find him hiding and shaking, reluctant to let me approach him.”

In addition to grooming himself so much that he would lose chunks of hair, Booker also had intense separation anxiety.

“One day I came home to find that he had pawed at the door so long and so hard, he had rubbed his toe pads completely raw,” says Luebke. “The door was streaked with blood, and bloody paw prints were all over the floor; I just held him and cried.”

Luebke took Booker to the vet, who prescribed Fluoxetine to help with his anxiety.

“The pills were very bitter, so he would often throw them up,” she says. “Now I get it compounded into a transdermal gel that I rub on the inside of his ears every day. I have Feliway calming diffusers in every room, he has calming treats and we play for at least 20 minutes before I leave the house or go to bed to help him expend some extra energy.”

While all of these modifications have helped, Luebke says much of the change in Booker’s behavior has been due to the little things.

“Whenever he uses the litter box appropriately, he gets treats and praise,” says Luebke. “Whenever he gets panicky, I lay down on the floor with him and let him come hide in my arm. Whenever I move too fast across the room and he flinches like he’s scared he’s going to get hit, I make sure to give him gentle touches in hopes of dissuading those associations.”

Booker’s behavior started to change for the better after a few months, but it really took about six months, the longest he’d ever been in the same home, before Luebke noted significant improvements.

While Booker still has some work to do, he’s definitely no longer the shy, scaredy cat he used to be.

“I recently had some friends over who had come over to meet him shortly after his adoption, and they couldn’t believe he was the same cat,” says Luebke. “He’s become so much more affectionate and confident and playful.”

Like all cats, he’s become more mischievous – Booker can open cabinets and doors and go places where he isn’t really supposed to go – and he also loves to crawl in Luebke’s lap and shower her with kisses. “He’s gotten so much more loving and outgoing and happy,” she says.

As for Luebke, the adoption has been life changing for her too.

“There’s that pet adoption cliché that says ‘who rescued who?’ but I get it now,” she says. “He’s as much a comfort for me as I am for him: I know when he’s anxious or scared and how to help him, he knows when I’m having a bad day or when I’m sick, and he doesn’t leave my side. I wasn’t going to write him off for having anxiety issues when I experienced them as well.”

How a Routine Trip to the Dog Park Ended With a Broken Hip
I pride myself on my dog park multi-tasking abilities. I’ll make phone calls and tackle my email inbox. But I no longer endorse doing any of this!
Up Next