Our cats are watching us to see how we react to new things, taking cues as to whether they should be afraid or feel safe, according to a new study, “Social referencing and cat-human communication,” published in Animal Cognition (January 2015).

At the University of Milan in Italy, researchers placed 24 cats and their humans in a room with an unusual object: an electric fan affixed with plastic green ribbons. At one end of the room stood a screen that represented the cats’ only way out of the room and hid a video camera. After the cats explored the room, their humans were asked to either positively or negatively react to the fan, while alternatively glancing at the fan and the cat. A positive reaction included a happy tone of voice, pleasant facial expressions and a move toward the fan. A negative reaction included a fearful tone of voice, frightened facial expressions and a move away from the fan.

The majority of the cats (79%) exhibited signs of social referencing by looking between the fan and their person. These cats also changed their behavior to match their human’s emotional response.

“It was the strong relationship with Nemo and Chanel (my two cats) that gave me the idea to study the social referencing in this species,” says Isabella Merola, lead author of the study and researcher at the University of Lincoln in the U.K. “The difference is that after this study I’m more careful of my reaction in new situations (for example, in a new place or when there is a new object), because I know they are looking for my expression, and that I could (at least in part) affect their behavior.”

We cat people might be tempted at first to say: “Well it’s about time science caught up to what we’ve already known all along!” But let’s withhold our judgment.

“People who live with cats know better than to buy into the oversimplified stereotype of aloof and indifferent cats versus warm-hearted dogs,” says Barbara J. King, chancellor professor of anthropology at the College of William and Mary in Williamsburg, Virginia. “But before this study, no one had specifically looked at how likely our cats are to seek clues from our faces and voices in unfamiliar situations.”

King, who has studied animal cognition and emotion since the 1980s, blogged about the study for NPR. “Some people insisted: ‘Oh we knew this already. Why is science always figuring out what animal people know?’ But, in fact, it’s so important to demonstrate under controlled conditions how acutely attuned animals are to their environment. It helps everyone, even those who don’t know (in this case) cats, grasp how they are thoughtful, feeling beings.”

I must admit that I find the results of this study to be quite humbling. To think that my reaction to something can impact my cats, and create either fear or calm, makes me want to be more responsible in controlling my response to every new situation.

We’ve seen it with human children. A child falls, begins to panic, then immediately following a parent’s kiss and calming reassurance that everything is all right, the child laughs it off and resumes play. To be able to set the atmosphere and impact others’ emotions, that’s a lot of power to wield, so I hope that those of us with pets and kids can remember to rein it.

Signs Of Pregnancy In Female Hedgehogs
How can you tell if a female hedgehog is pregnant?
Up Next 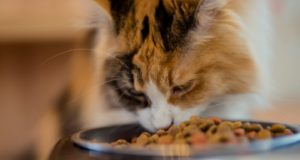 How Much To Feed Your Young Cat
How much should you feed your young cat so that they get proper nutrition, but don't pack on the pounds? Get the scoop on cat food portions here.