BeSmart / Get Answers / 5 Tips for Dealing with Squeaky Toy Craziness

Most pups love playing with dog toys that make noise because it taps into their prey drives—the high-pitched whining mimics the sound made by wounded prey. The problem is that the non-stop noise can drive a pet parent to commit acts of squeakicide, banishing those annoying toys to the top of the closet, or worse yet, the garbage can. Fortunately, there are ways to live in harmony with noisy toys so that your dog gets to engage in a primal behavior without driving you to the brink. Here are six ways to make having squeaky toys in your home more manageable for everyone.

It seems unfair to completely deprive your dog of loud toys, so establishing set times for noisy play is a fair compromise. Keep your dog’s squeaky toys put away and then break them out for a play session before you settle in to binge watch your favorite show or after you’ve finished your conference call. Keeping the toys out of your dog’s reach will make them seem extra special when your dog finally has a chance to get his paws on them. Doling out the noisy toy in small doses elevates it to super-charged status (it must be awesome if it only comes out once a day) and you can use it as a training reward before you hand it over to your dog. Ask for a polite behavior like sit or down, then reward with the toy!

Opt for Plush, Not Plastic

The difference between stuffed toys with a squeaker inside and latex or rubber toys that squeak is noteworthy; rubber toys are essentially one giant squeaker with nothing to muffle the sound, meaning the decibel level difference between the two types of toys can be huge. While both types can be annoying after a while, the noise produced by rubber toys is usually louder and more piercing. Stick to plush toys with a squeaker inside, the quieter of the two options, if you want to maintain your sanity.

Look for a Softer Squeak

The decibel range of squeaky toys is more varied than you might realize. There’s everything from the traditional in/out squeak to the loud and low “growler” toys that sound like a honking goose. The best strategy is to test the squeaker before you take it home and determine if you can tolerate hearing the sound over (and over, and over). Try to also locate the squeaker within the toy before you buy. A toy with a single small squeaker is typically lower decibel, while a toy with several small squeakers borders on being annoying and a toy with a large squeaker is usually the type that sounds like nails on a chalkboard after a while. A rule of thumb; the cheaper the toy, the quieter the squeak (of course, the tradeoff is that less expensive toys are also usually less durable).

Believe it or not, silent squeaky toys are not an oxymoron. There are toys available that claim to use “squeaker technology” that takes a dog’s powerful hearing into account so that the toys emit a sound that’s triggering for dogs but inaudible to humans. The verdict is still out on the technology, as the toys still make a bit of noise, but it’s worth a shot if you’re being tortured by noise.

Another interesting squeaker innovation is the toy that goes from noisy to silent in the flick of a switch. The concept is brilliant in that you essentially get two toys in one; a loud toy for when you can stand to hear the noise and a silent one for when you need to concentrate. These types of toys allow your dog to enjoy the thrill of the kill according to your schedule.

Victoria Schade is a dog trainer, author & speaker who has contributed to The Washington Post, Martha Stewart, and other publications. 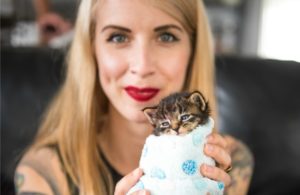 Not-So-Crazy Cat Ladies: 3 Fierce Feline-Loving Women
There’s the stereotype of the crazy cat lady who lives alone with 16 cats (and one litter box). Meet three women who debunk those clichés.
Up Next

8 Documents Every Pet Parent Should Have
When it comes to keeping your pet safe and healthy, it's best to have your paperwork in order.