I got two male Campbell’s dwarf hamsters four days ago. They are from the same cage. We got them a nice big home with all the stuff they need such as a house, hamster fluff, two food bowls, two water bowls, hamster toys and a wheel. They were getting along pretty well until about two days ago. My hamster Tory has been great. He has been super friendly, very energetic. On the other hand, Burch was in his house for the first two days. The night of the second day he came out, I let him smell me and get used to me. After that, he became very energetic.

Our family realized that they have been squeaking and “fighting.” At first we thought it was play fighting, with Tory, the sweet, energetic one, bugging Burch. But now we realize that Burch is chasing after Tory, and Burch is always running around while Tory is not as energetic as he was before. We think that Tory is just avoiding Burch because he is bugging him. This is so confusing because they seem to be getting along with each other in their homes, sleeping together. We definitely need your advice.

I recently bought a Winter White hamster. Unfortunately he died three days after getting him. My boyfriend and I took him back and planned on getting another. At the store they had three in a cage already. We got two of the three. I asked the girl working there if the cage we had was big enough and she said yes. It’s been a few hours and one of the hamsters kind of chases the other around and the other squeaks. This is occurring every now and then. I am very worried. I have to wait until the morning to get a separate cage. I’m just concerned about what is going on. My boyfriend said they’re just playing, but after losing one hamster I’m extremely nervous. I was thinking of either just separating for good, maybe getting a larger cage or getting another cage and connecting them.

Dwarf hamsters are social creatures that usually thrive with a well-matched, bonded cagemate of the same species. Still, each hamster is an individual, not every pairing is a good match, and sometimes living as a solo with plenty of human interaction can be the best option. It’s a challenge to know what’s right. You both clearly care very much for your pets and want them to be safe and content. There are common signs to help you evaluate your pairings and techniques to give each its greatest opportunity to flourish.

First, I’m very sorry about the loss of your first Winter White. It’s natural that makes you worry more about your new pets.

Second, please take the “hamster fluff” out of Tory and Burch’s cage. Fluffy, cottony beddings aren’t safe for hamsters. Indigestible threads can cause gastric impaction or become tangled around limbs or digits.

The chasing and squeaking you both describe may simply be normal squabbling — a settling of dominance issues. Squabbling is very common when a new pair arrives in your home, as they set up housekeeping and figure out their relationship. It can be loud and distressing to watch, but it’s instinct. Watch closely without interfering so long as no one’s getting injured.

Bursts of chasing, sniffing, tussling and squealing are normal. You’ll often see one hamster roll the other over and groom him while holding him down, showing dominance. The hamster on the bottom squeaks in submission and is soon released. This can happen over and over, and so long as both hamsters get up and resume all their activities, it’s normal. It can last a few weeks early on, and may recur a few times over the course of their lives.

Lay your hamsters’ home out so that neither can trap the other. This means no long expanses of tube and no blind corners. Any boxes or houses need at least two exits, with no way to block both at once. Two sets of accessories can reduce tensions. Keeping a daily routine is important, as is their shared scent. When you have them out of the hamster cages , always play with them together in your hands before returning them home so they have the same scents on them. That can reduce chasing.

You’re very observant to note that Tory and Burch’s sleeping together is an important and very good sign. Healthy companionship includes sharing activities such as sleeping, eating, playing and grooming. While those indicators are present, and the pair spends significant amounts of quality time together, they’re still finding some value in their relationship.

Scuffles can be noisy and intense, but if you’re sure they aren’t injuring each other, bite your lip, watch closely and try to let them work things out. Physically interfering in a scuffle prevents it from coming to a healthy conclusion and can escalate things to real fighting.

If a hamster causes injury or interferes consistently with the other’s water, hamster food, rest or exercise, the pairing is over. Good signs can’t outweigh danger. More time won’t change it. Separation can give them both safe and happy lives, and interaction with you can meet their social needs.

Keep in mind, though, that separated hamsters can’t play together or have connected housing. Once hamsters are separated, it’s for good. Dwarf hamsters are quite territorial and will not see former cagemates as old friends, they see them as threatening rivals.

The goal is to do whatever gives both hamsters the highest quality of life. By paying such good attention and asking questions, you’re already well on your way. 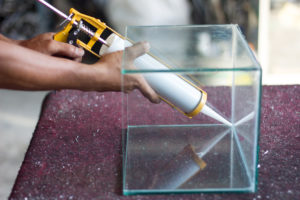 Fixing A Leaking Aquarium
Aquariums that won't hold water, and the people who own them.
Up Next