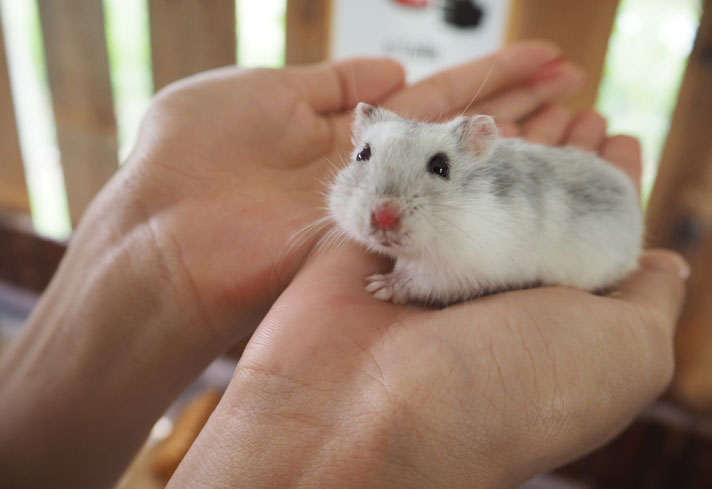 BeWell / Wellness / How To Hold And Handle A Hamster

How To Hold And Handle A Hamster

It’ll take discipline, but the first thing you should do is avoid the urge to handle your new hamster for 12 to 24 hours after you first get it. Larger Syrian hamsters are more amenable to holding than dwarf hamsters, on the whole, but all will live longer, happier lives if you create a nurturing environment for them.

Taming a hamster to make it “hand-friendly” requires a good deal of patience. These four “Golden Rules” are worth memorizing, or copying and posting somewhere near the hamster cage :

Rule No. 1: Always Wash Hands Before Picking Up Your Hamster

If you have several Syrian hamsters it is especially important to wash your hands before picking up each one. Hamsters “see” with their noses. If the scent of one Syrian is on your hand when you try to pick up another Syrian, the hamster in your hand will believe it is being attacked by the other hamster. Even dwarf hamsters, which live in groups, are subject to this.

Wash with an unscented soap. If you use fruit-scented soap, or if you have any sort of food-like smell on your hand, your hamster will “see” your hand as food.

Rule No. 2: Never Wake Your Hamster Suddenly From Sleep

Hamsters sleep very deeply. In the wild, hamsters spend most of their time deep, deep underground, where they’re rarely disturbed. And when they are, it generally means trouble for them! To wake your hamster, just speak to it in a soft voice.

Just remember that apart from running, hamsters have very few defenses in the wild. Hamsters are not especially strong, aggressive or agile, and are wary of sudden changes in the environment. When you are ready to pick up your hamster, always let it see your hand first for a few seconds before approaching it.

Rule No. 4: Pick Up Your Hamster Sensitively And Sensibly

Always pick up your hamster with both hands and put one hand under its bottom for support. Always lift the hamster facing toward you rather than away from you. Being lifted in midair is disorienting. If your hamster is looking at you it has some frame of reference and is less likely to jump. The techniques for familiarizing your hamster with being held are simple but require slow, consistent application and a lot of patience.

Your task for the first few days is simple: Speak to your hamster in the same, soft voice all day long. Place a hand in the cage and do nothing more. Bring a book, watch TV—the only thing you should not do is try to pick up your hamster.

If your hamster is the more gregarious sort, it may wander over and sniff, lick or sit on your hand. Resist the urge to close your fingers around it as long as possible. Let your hamster investigate at length. Even if your hamster is ignoring your hand, that is a form of interaction. The longer you expose your hamster to your hand without doing anything more, the more quickly its wariness will subside and the sooner your hamster will turn that corner toward tame behavior.

Why the slow approach? One of a hamster’s main natural enemies is the bird. In its natural environment, as it scurries across the desert floor looking for food, hamsters and other rodents are easy targets for wild birds overhead. They can swoop down, fast as a shotgun, and grab a hamster in their talons.

When you reach into that cage with fingers extended, especially if it’s an aquarium tank or it opens from above, you may be sending the hamster a signal that it’s about to become someone’s dinner! So do your best to break that connection as quickly and thoroughly as possible, by allowing your hand to lie limp on the cage bottom. Remember that being grabbed is one of your hamster’s paramount fears.

While your hand is in the cage, the hamster may attempt a nibble. This isn’t necessarily aggression. Hamsters, especially dwarf varieties, test and probe with their teeth throughout their life.

If your hamster seems ready to set its teeth on you, pull your hand away, but slowly and smoothly, without frightening the hamster. If it does close its teeth on your skin, the best way to make your hamster stop is to blow directly into its face. Yelling, grabbing or any other kind of physical reaction is likely to make your hamster more frightened, and possibly clamp down harder. A hamster bite is generally not dangerous, but it’s surely no fun. When you blow in a hamster’s face you do it no harm (unless you have a cold, in which case it’s best not to get too near your hamster at all).

Say No To Punishing Hamsters

A word about punishment in general: It doesn’t work on a hamster. Hamsters, as clever as they are, lack the ability to draw clear connections between actions and consequences. A hamster only acts in its own basic interests and has no concept of “doing wrong.” If you strike or yell at a hamster, it sees you simply as an antagonist, not a teacher.

Gently blowing in a hamster’s face and perhaps issuing a firm “no” is absolutely, positively the strongest punishment you should ever consider. The hamster will rear back and squint, and get a look on its face like it smells something funny (which, if you’re calm and collected, can be rather amusing). You’ll almost literally be “taking the wind out of its sails,” but you won’t be making your hamster more wary and defensive, as you would if you took any stronger action.

You’ll have to be the judge as to when your hamster is ready to be picked up, following the “golden rules.” There’s no set time period, but be prepared to give your hamster at least a few hours over several days to become accustomed to your scent and your presence before trying to lift it.

If you’re not yet confident about holding your hamster, or if your hamster seems frightened in your bare hands, it’s OK to lift it out of the cage in a cup or small bowl.

The best hamster “elevator” is one you can make yourself from a clear plastic, 1-liter soft-drink bottle. Remove the label and cut the bottle in half. Snip off the bottom half of the bottle so it resembles a cup roughly the size of your hand. The plastic commonly used for these bottles is thin enough to transmit the warmth of your hand, and the transparency allows the hamster to see the hand, but of course there’s nothing for the hamster to bite. Eventually, you’ll be able to dispense with this scoop altogether.

Excerpt from the Popular Critters Series magabook Hamsters with permission from its publisher, Lumina Media.

Your Active Pup Could Benefit From a High-Protein Diet
Learn how high protein dog food benefits active dogs. See why a high protein diet for dogs is the best option for supporting your active dog’s lifestyle.
Up Next

Got Fleas? Follow This Flea-Buster Checklist
Eliminate ticks on dogs and fleas and cats with these tips. Prevent future flea infestations and flea bites on your pet using these flea and tick products.