Family Hike Leads to a Forever Home for Stray Cat

Adventuring can lead to all kinds of surprises. For the Ross family in Georgia, it led to a stray cat who stole their hearts and joined their family.

Lorrie Thomas Ross never expected to end up with a new furry family member when she and her 6-year-old daughter, Edyn, set out for a hike one Saturday earlier this year. But that essentially is what happened.

Ross and her daughter were en route to their hiking trail in Chattahoochee Hills, Georgia, when a tiny orange cat approached them outside of their local coffee shop.

“My daughter and I are both cat people, so [we] had to stop,” Ross says.

As they pet the cat, Ross noticed an engorged tick on the stray cat’s head.

“I ran home to grab a tick-removing tool,” Ross says. “I came back and spent about five minutes taking this tick off her head while she cooperated beautifully.”

After removing the tick, Ross and her daughter traveled on to enjoy their hike. But later, well into dinner that evening, neither of them could stop thinking about the cat.

“She was so little and frail looking,” Ross says.

Though she considered going back to scoop the cat up and bring her home, it didn’t seem practical.

“I already have a rescue cat—Earl Grey, a huge male cat—so I didn’t think it would be good to take her home, and I was worried my husband wouldn’t approve,” Ross says. “I also wanted to get on our Facebook private neighbors’ page to see if there was a history on her; some cats in the community are indoor/outdoor, so I didn’t want to jump the gun.”

Ross says she spent half the night awake thinking about the lonely kitten and checking the community Facebook page for any info on the mystery kitty.

“There was actually lots of commentary, but nobody knew anything,” Ross says. “Most thought ‘she’ was a ‘he’ since orange females are a little uncommon, and everyone said how sweet she was.”

The next morning, while sipping tea and watching her daughter play, Ross says she knew she just couldn’t leave the kitten to fend for herself.

“I was on the porch with my daughter, and I asked her if she wanted to go get the cat,” Ross says. “I don’t think I’ve ever seen my daughter get up and out of the house that fast.”

Still in their PJs, mom and daughter left the house with a pillowcase and some cat treats.

“Kitty was near the coffee shop where we saw her last,” Ross says. “We gave her treats, petted her and swooped her up.”

After a quick visit to a local vet for cat flea and tick treatment, the cat, whom they decided to name Lady Orange, was ready to go home.

“She didn’t make a sound at all in the car,” Ross says. “It was like she knew we were going to take care of her.”

A few days later, Ross took her to the vet again. This time for a full exam and to book a spay appointment. During that vet visit, they discovered a few surprises.

“I assumed she was young since she is so small, but the vet was able to determine she had already been spayed and, based on the exam, that she was probably about 6 years old,” Ross says. “If you shave the belly area, you can see the spay scar; it was clear as day.”

Lady Orange was missing many teeth, likely from malnourishment, and the fur on her nose was rubbed raw. She also had a previously broken tail that never healed properly.

“The vet would have amputated it during the spay, but since she was already spayed [and] the tail is not bothering her, we left it and love her little imperfection,” Ross says.

A New Life for Lady

After updating her community Facebook thread to let everybody know that stray kitty had a forever home (much to everybody’s delight), it was time to make sure Lady Orange and Earl Grey could get along with each other.

“We were so worried [that] Earl Grey would be aggressive and territorial,” Ross says, “but he has been a complete gentleman.”

And Lady Orange is adjusting well. When she first came home, she ate like it was always her last meal—not anymore!

“She would inhale food then go for the other cat’s food,” Ross says, adding that the small cat would steal food whenever possible. “She once snagged a meat pastry I had on a cookie sheet [waiting] to go into the oven. [It] was bigger than her head, and [she] ate the whole thing. It was hard to be mad; she was so stealth! She has mellowed out a bit with food, thankfully.”

Despite her shaky beginnings, the tiny orange cat now enjoys having a home and a family. She sleeps with Edyn almost every night.

“Edyn is so happy to have a cuddly cat, as our other cat is not much of a lap cat, and Lady is a little snuggler,” Ross says. “Lady also lives to lounge. She has these furry grey pillows that I leave on the floor for her that she nests on … she looks very glamorous when she sleeps.”

Even better, Lady likes to smile.

“When she is super happy, Ross says, “her lip goes up in a very Elvis kind of way.” 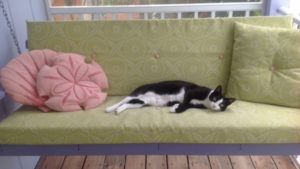