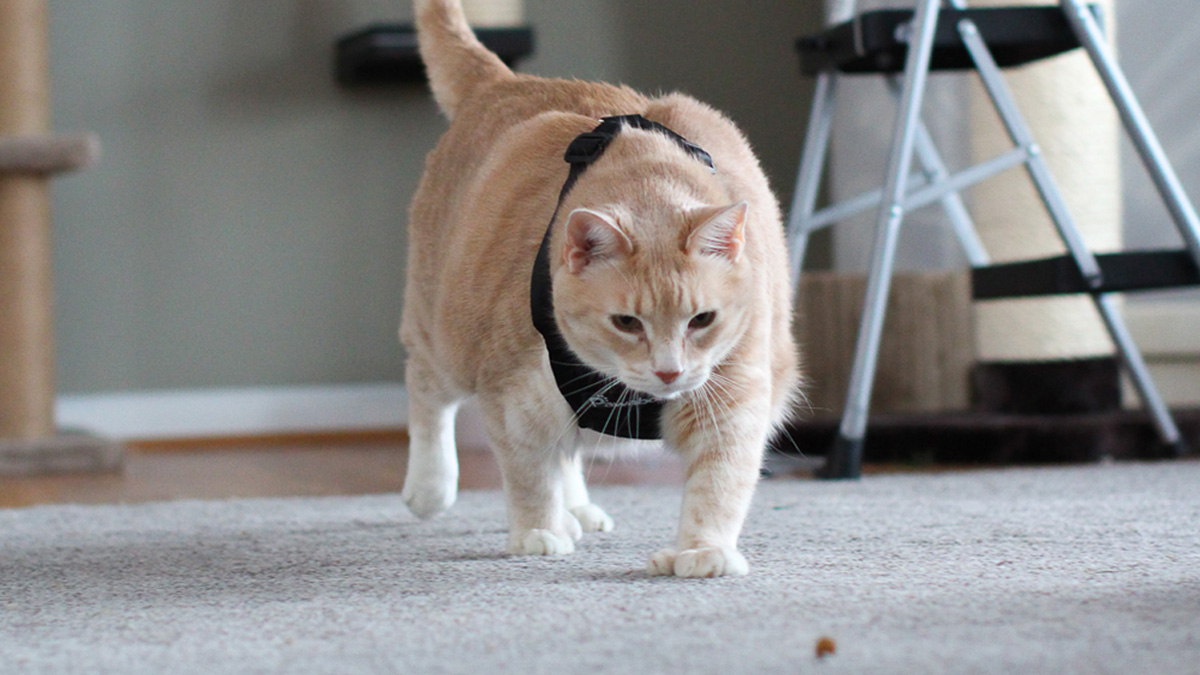 When it comes to exercising, everyone gets motivated in different ways. For Bronson the cat, all he needs are some treats to get up and get moving.

Once weighing in at three times the size of an average housecat, Bronson is on a mission to get fit. Since starting his weight loss journey in April 2018, he’s lost six pounds and has a little over 10 pounds to go. To reach his goal, he needs to exercise, which isn’t exactly his favorite thing to do. (We feel you, Bronson!) Luckily, Bronson’s pet parents have discovered a delicious new workout to keep him moving in the right direction.

“His favorite workout right now is chasing dental treats across the room at lightning speed,” says Mike Wilson, Bronson’s pet parent who lives in Grand Rapids, Michigan, with his wife, Megan, and their three other cats.

Using treats as lures has proven successful for other exercises at home, too! Wilson also uses cat treats to play “stair snacks,” which is a game he and his wife created in which they drop treats onto the stairs and Bronson has to climb up and down the stairs to the hunt the snacks down.

Pet Central first found out about how much cat treats entice Bronson when Wilson gave us an update on how the overweight cat’s weight loss journey went in January. That’s when we learned that Bronson has a mischievous side, which came out the moment an entire jug of cat treats fell all over the floor. When that happened, Bronson immediately transformed into a “lightning cat,” quickly moving from treat to treat.

And while Bronson ate one too many treats that time, the good that came out of that experience was knowing what motivates the overweight cat to get a good workout in.

Wilson filled us in on other developments in Bronson’s weight loss journey, including the hefty feline’s favorite post-workout ritual and his new and improved weight loss plan, which his vet created after some initial struggles with shedding the LBs this month.

Did Bronson reach his goal this month?

Yes, he did. This month he lost .4 pounds and is currently 27 pounds. Initially, we thought he was going to be short of his goal [which was losing .7 – 1 pound], but our vet ended up adjusting his goal to suit his current weight and has advised us to not let him go over a .5-pound loss per month. This is because if a cat loses weight too quickly, they can get fatty liver disease, which can be fatal. To ensure Bronson safely loses weight, the vet had a formula he used with Bronson’s current weight to come up with the new range he can lose.

What encouraged you to reach out to the vet to change Bronson’s goal weight?

Well, two weeks into February, Bronson was at 27 pounds, which was .4 pounds [down] and was pretty close towards his .7 to 1-pound goal, so we felt really good about the month. Then, we did another weigh-in a week later and he was back up .3 pounds.

Since his weight bounced back up, we reached out to our vet to see what they thought. They suggested reducing his calories by 10 percent and changing his goal weight from .7 to 1 pound to .5 pound.

We know his mischievous side comes out whenever there is food. What have you done to help control the amount Bronson eats each day?

He always tries to eat his brothers’ food, so we ended up mounting feeding shelves for the rest of our cats. At this point, Bronson’s the only cat that eats on the floor, which has been super helpful for managing his portions.

What has been the most exciting milestone for Bronson this month?

This month’s milestone is definitely getting on the flea and tick meds. [Bronson had to reach 27.5 pounds in order to start them]. Honestly, it was a little underwhelming because it’s been incredibly cold out, so we haven’t had him outside just yet. We’re hoping to have a nice sunny day this week.

Any setbacks this month?

A few days ago, we went out of town for a day. We have automatic feeders which we use in a pinch. They rotate portions of [wet] food every four hours, [which is kept fresh by ice packs]. Well, we had a camera on the four feeders and ended up seeing Bronson eating the other cats’ food [every] once an hour. It was painful to watch from afar.

I think in the future, we need to have him in a separate room. We just weren’t thinking about the fact that since it rotates every four hours, there’s pretty much constant food out.

Anything new you discovered Bronson likes this month?

This month we found out that Bronson goes absolutely nuts for palm plant branches, [which we took from one of our houseplants]. There is something about the unkempt and crunchy palm leaves that he finds irresistible. This is the first “toy” we have seen him get up and chase around the room, whereas he usually just waits for the toy to be in his reach.

Does Bronson have a favorite place to relax after a workout?

He likes to sit on his cardboard scratcher or our couch. Also, after a long workout, he typically spends some time cleaning and feeling good about himself on a comfortable spot.

Bronson dreaming about chasing some more treats. Courtesy of Mike and Megan Wilson

For Valentine’s Day, instead of treats, we got him a raised bed that he really likes. It’s been his new favorite spot to nap.

We know Bronson has some “frenemies” at home. Has he warmed up to them a bit more this month?

Bronson has definitely been getting along better with his [feline] brothers. We’ve always tried to play with them around each other, and we’ve finally seen that he’s been more likely to do things like wait his turn and play without it turning into a squabble. Although if he does try to fight with one of his brothers, the good [news] is a Bronson fight only lasts a couple seconds, but it’s definitely much nicer to see everybody getting along.

[However,] once it’s time to eat and we start preparing their food, Bronson forgets everything about team building and friendships and approaches each cat by either sitting near them with his chest puffed up or he gently bites them … It reminds us of how a bully might take a kid’s lunch money.

“Keep your friends close, but your (food) enemies closer!” Courtesy of Mike and Megan Wilson

[Also,] all of our cats have been sleeping on our bed, which was an interesting experience when everyone wanted their own part of the bed. For a bit, all of the cats were on edge about being touched and reacting quickly if they were touched by someone they didn’t like (any other cat). These last few months, all of the cats have started laying with one another on the bed, not minding if they touch each other and sometimes [they’ll] even lay over one another.

Did Bronson do anything particularly funny this month?

“When the treats come out, I come out. Got it? Good!” Courtesy of Mike and Megan Wilson

We had a ladder out to try and get pictures of Bronson from up above, and Bron has claimed it as his base. We ended up leaving it out for about a week because every time we went in the living room, he would be under it while surveying the living room like a guard or hall monitor. I think he likes it because he likes being under things, while still having a lot of room to stretch.

Do you have any helpful tips this month to encourage pet owners who are dealing with feline obesity?

We always try to incorporate some kind of game or physical aspect when Bronson is getting treats. In the wild, cats hunt their food down, so we like the idea that he works for his treats and hunts it down. Plus, he’s a dangerous hunter at heart, so it’s only right he would be chasing his snacks.

We also think that feeding a heathy snack is very important. If we’re doing any game other than tossing treats across the floor, we use freeze-dried chicken, which he loves. For tossing treats on the floor, we’ve been using dental treats, because they make a very enticing noise when thrown … we limit those to five a day.

Did any of the stuff we sent in this month’s package help Bronson?

The PureBites chicken breast freeze-dried cat treats [are] used to play “stair snacks” … This is a little more of an intense exercise for him and [we] learned that it was best played without our other cat, Ickle, who [would] sit in the middle of the stairs as a road block and whom the treats constantly gravitated towards.

He also [likes] the Hartz Just For Cats toy variety pack that he got. We keep those around the living room to entice him throughout his day.

Our other cats are obsessed with the Frisco foldable crinkle play tunnel. They use it constantly. We used to have a smaller one without the soft outer fabric and the one you sent is much nicer. We tricked Bronson into going in it with treats, but he’s a little uneasy about it. We think he thinks cats are going to approach him from behind and bite his butt or something. Who knows?

What are Bronson’s goals for March?

Losing weight is always goal No. 1. We’re [also] hoping March is a little warmer than February [since] getting outside more is something we’re going to be working towards.

With that said, after it gets a little warmer, we’re going to start bringing him out to the car while it’s parked and feeding him his treats in there. Hopefully this warms him up to at least being able to go for short rides. Right now, the only place he really goes is right up the street to his vet.

The moment Lindsay started her career here at Chewy, she hit the ground running in customer service; she knew that this is the company she wanted to grow with from then on. When Lindsay isn’t spending her time writing for Pet Central, she’s most likely binge-watching a Netflix series and cuddling up with her 80-pound fur baby, Dexter. 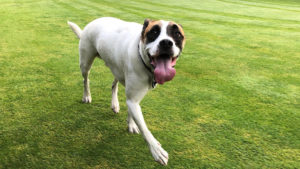 Abandoned Dog Who Once Struggled to Walk Now Spends His Days Chasing Birds at a Golf Course
Discover how Bauer, a pup left abandoned and struggling to walk, found his forever home and gained a new stride.
Up Next