BeWell / Wellness / Why Do Cats Purr?

Why Do Cats Purr?

It’s one of the sweetest sounds to cat-owners’ ears: the subtle, methodical vibration that comes from our cats when we’re playing or relaxing with them known as purring.

But what exactly is a purr, and is it always a good thing? We checked in with some experts to find out more about the feline sound we’re all so familiar with.

“What sounds like a sweet symphony to us is actually just a simple flexing of your cat’s larynx and diaphragm muscles as they breathe in and out, which creates a low frequency sound,” explains Dr. Oscar E. Chavez, BVetMED, MRCVS. “The only thing we know for sure is that cats purr to communicate emotion. It’s not all that different than how humans communicate emotions.”

So how can you tell what your cat means when she’s purring? Dr. Chavez says a lot of that will have to do with other cues, and maybe even their setting.

Why Do Cats Purr? Exploring the Meanings

So you know your cat is trying to convey some sort of emotion when he purrs—but what is he actually feeling? “What many people don’t realize is that those emotions can vary widely,” says Dr. Chavez. “Cats don’t just purr to communicate they are content.”

Some common reasons that cat purr include:

For pain and pain management: “As a mom cat goes into labor, they emit huge purrs, thought to actually release a pain management endorphin,” says Vickie Fisher, President of The International Cat Association and an all-breed judge. Dr. Chavez agrees. “There is some research to suggest that the frequency of the purr has tissue healing properties, so it’s possible that cats purr to self heal, or self soothe,” he adds.

For contentment: “Tiny kittens will purr and knead their moms while nursing, which is a sign of contentment,” says Fisher. In older kittens and cats, contentment purring might occur while they are eating, being pet or lying in a warm, cozy spot, like a heated cat bed. “They’re purring with a feeling of security of safety,” she notes.

For territorial reasons: When one cat is entering another’s territory, she may purr to signal to the other cat as a friendly gesture that she’s not interested in aggression. “My own cats have a ritual for replacing each other on my lap,” says Fisher.

She continues, “While one cat rests in my lap, purring with contentment at being mom’s sole object of affection, another will hop up next to me and begin purring, while very slowly inching towards the other cat. There will be several minutes of purring and head grooming, and the second cat will carefully lie down as close as possible. Usually, after a bit of time, the first cat will decide things have gotten a bit crowded and will jump off, leaving the second cat to find a more comfortable lap spot. No fighting, no aggression. Just a simple communication of purrs.”

For attention: If you have a cat, you’re probably well aware that you almost never need to set an alarm, because your cat is certain to wake you up in the morning by jumping on the bed, kneading and purring. This purring is mostly likely just a way of getting their human’s attention to alert them to the fact that it’s time to be fed.

Out of fright: “Purring may also have a calming effect on your cat,” says Fisher, which is why they may do it when they’re afraid. “Visiting the vet or being in a strange environment might cause a cat to begin purring,” she says.

Using your cat’s environment to determine why your cat is purring is the simplest way to determine how she’s feeling. “It’s never safe to assume that, if a cat is purring, it is happy and content,” says Fisher. “Cat owners should always be vigilant. Purring during play, meals and normal routines are usually pretty safely considered ‘good reasons.’ If the cat is outside its normal environment and purring, it’s obvious that it’s trying to comfort itself with something familiar.”

Beyond that, Fisher says perhaps the most important purr diagnosis comes when a cat is not feeling well and may require a trip to the vet. “Obviously, if a cat isn’t eating or is listless and uninterested in normal play behavior, but is purring, there is most likely something wrong.” 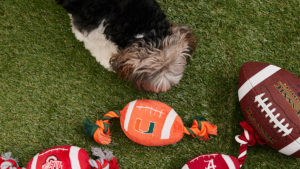 Dog Toy Safety Considerations
Learn about what to consider when looking for safe dog toys.
Up Next 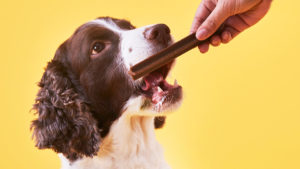 Choosing the Right Treat for Your Dog
Discover the best treats for dogs while learning about a variety of dog treats and dog chews.