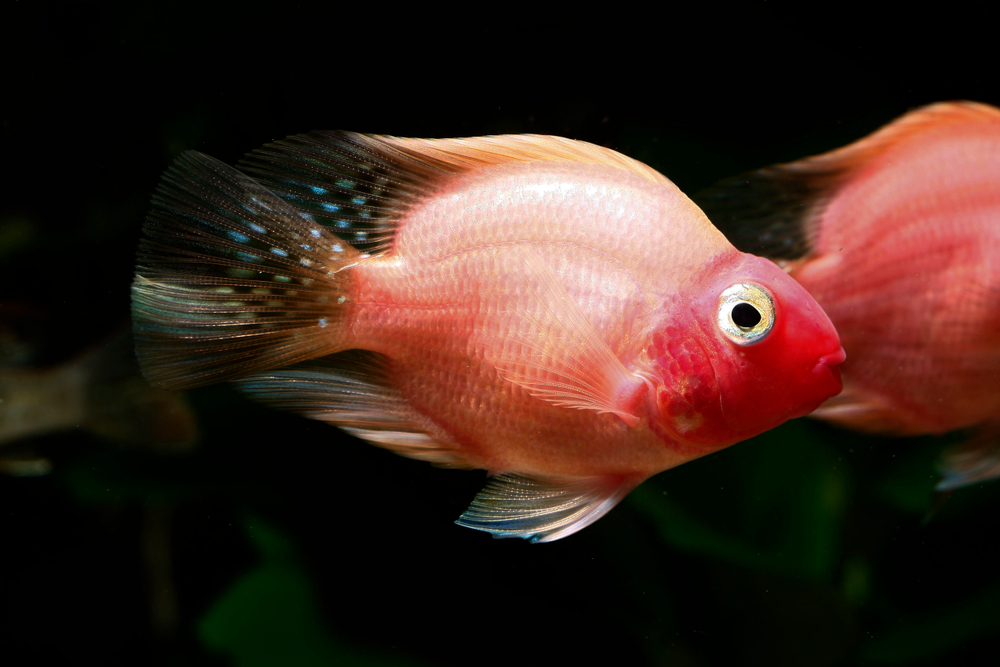 Recently, a member posted on the Potomac Valley Aquarium Society’s page about “Strawberry Tetras.” She had purchased some of these lovely red fish at the local aquarium store, only to later learn that they were dyed. Undoubtedly, a few people are reading that sentence with a “huh?”, so let me explain what this means.

A number of varieties of fish are sold that have been artificially colored. This is done in one of four main methods. The original method of artificially coloring fish is by injecting a paint under their skin. This was done with transparent fish, and gave rise to the painted glassfish. Recently, I’ve begun seeing glass catfish similarly “painted.” If you ever are able to handle a dead one (and if you buy one, you likely will be able to), you can lightly squeeze the paint stripes and see them move: they remain fluid, under the fish’s skin.

Second, fish may be simply soaked in dye. This gave rise to the Strawberry Tetra mentioned above, as well as other color varieties of the same (Blueberry, Lime, Chocolate Pina Colada, okay, I made that last one up). These are simply the white form of the Black Widow Tetra, often sold as the White Tetra, which have been soaked in dye. This is commonly used to add color to a number of albino fishes, such as Albino Cory Cats and Oscars . Additionally, it may be used to deepen the color of other fishes: the Blue Botia is sometimes soaked in blue dye to make it more blue. Sometimes, it is dyed with red or yellow to make it purple or green (respectively).

Recently, a new practice has been to tattoo the fish. This is different from the injection of paint in that a tattoo gun is used, rather than a hypodermic, and the dye is located in layers of the fish’s skin, rather than completely underneath it. This has been responsible for the hearts, flags, and other patterns found on mollies, gouramies, blood parrot cichlids, and essentially anything else that will hold still. The so-called “Lipstick Parrots” have bright red dye tattooed around their lips: this practice is sometimes seen for gouramies and other fish as well.

And finally, fish may be “juiced” with hormones. Fish are kept in water containing large amounts of artificial hormones, which causes them to display fantastic colorations. In some cases, such as in many Peacock Cichlids (Aulonocara), it can actually cause the usually drab females to display male characteristics. Many aquarists have told me that it results in sterile fish, though I have never seen any actual research to back this up (though it certainly makes sense).

The practice of dyeing or juicing fish is problematic for a number of reasons. First, it greatly damages the fish, and many of them simply perish. This point is well made by other authors, so I’ll be brief (for once). The mortality rate of painted glassfish is among the highest of any freshwater fish in an aquarium store. These fish are, in the Far East, injected with dye using a syringe. This syringe is not sterile, and the conditions the fish are kept in is not sterile. The dye will eventually fade and leak out of the fish’s system, and the – I guess manufacturer would be the best word – manufacturers know this. As such, they want them in the shipping containers as soon as possible after injection. So, after being jabbed with a needle, the fish are thrown into overcrowded bags, stressed, and shipped across the world. Its no surprise that disease runs rampant among the fish.

Dye soaking seems to be relatively harmless to the fish: it eventually fades, and the fish resume their natural color. There may be subtle problems associated with it – dyeing all of your own skin blue would pose some health problems, after all – but these aren’t documented. Tattooing seems to have a much lower mortality rate than injection, but it is still elevated above the unmodified fish rates, as is the frequency of disease.

As well as potentially spreading disease, this practice creates problems with the customer. Many people buy these fish without knowing any better. In the cases of fish with elevated mortality rates, aquarists may just become frustrated with fish keeping and assume that fish are hard to keep alive, not that they’re buying fish that have been injected with dye. Should the fish survive, the aquarist is left with a fish that is not what they expected or wanted, which can also be a source of major frustration. When buying hormone juiced fish, aquarists can quickly become frustrated as they try to figure out what they’re not doing for their fish that is causing their color to fade: “am I giving it nutritious enough food, am I changing enough water, why do my fish fade?”

If we view the fish aquarium as an important tool for conservation, creating a love of fish and, through that, a desire to protect their natural habitat, then frustrating aquarists with artificially colored fish is a big detriment. Beyond this, though, it can make for a big educational problem. Many aquarists, when learning how common this practice is, begun to assume that it is even more common than it is. I once nearly came to blows with someone in an aquarium store over this: he was explaining to his wife how they injected neon tetras with red and blue dye. I tried to explain to him that neon tetras really are that color. For whatever reason, he took this personally and called me a liar, and some other choice names.

The idea that neon tetras and other colorful fish, even a lot of marine fish, are artificially colored is one that a lot of people mistakenly hold. I’ve asked employees at several Local Fish Stores about this, and none were surprised that someone had thought so. Most had heard it themselves before – either one guy really gets around, or its a pretty common belief.

Ultimately, what can we do about the practice of dying fish? Asking stores to stop selling them is not feasible, for a very, very simple reason. If a store stops selling them, someone else will sell them, and customers will go there. There is demand for these fish, even if people do not realise they are dyed. A store which doesn’t carry them will get a reputation for not having the same variety as a store that does. While we may not like the practice, it makes business sense to sell them as long as people buy them. In these economic times, with Local Fish Stores folding left, right, and centre, I would never ask a store to do something that might be detrimental to its business.

Education of the customers is the most important thing. A good fish store should either label fish as dyed or at least tell customers who are purchasing fish that they are dyed: when I worked in retail, I always informed customers that the fish they were purchasing were dyed (many turned them down at this point, some didn’t).

Eventually, international legislation should be passed that outlaws the practice of dyeing fish. This practice is animal cruelty at its best, and simply because it is done outside of our borders does not make it right. The importation of dyed, injected, or tattooed fish should be illegal. I would recommend that we write our members of congress or senators, but I’m reasonably sure that none of them can read.

The marine world has been, fortunately enough, nearly free of the fish modifying fad. Its only a matter of time before someone decides that clownfish need big red noses or something, but so far, nothing has really appeared. However, one noteable exception exists. Many types of anemones are soaked in dye to add color. This is principally done to the carpet anemones, but I’ve seen it done to other types, as well. The anemone is soaked in a dye of some sort to give it an artificial color. Often, this is a green colored dye, but I’ve also seen blue and red. This is instant death for the anemone.

Most of the anemones sold require a good deal of light to survive: they harbor a special type of algae called zooxanthellae, which provide the anemone with sugars in exchange for a safe place to live. When the anemone is dyed, these zooxanthelae are unable to obtain enough light to photosynthesize and soon die, starving the anemone.

To add insult to injury, these anemones are probably wild collected, and maybe decades old. They form vital parts of the ocean community and are already threatened by high nutrients, pollution, increased ocean temperatures, and other problems. Their removal greatly upsets the local ecosystem, and to do so with the purpose of needlessly murdering them is utterly shameful.

Many types of anemones are brightly colored naturally. The secret is to check the base of the foot of the anemone. If its colorful, the animal is dyed. If its free of color, its probably not: however, I’ve heard that some manufacturers are smartening up to this check and “spray dyeing” the anemones. This practice should be outlawed.

How Can I Keep My Cat From Digging In My Houseplants?
CatChannel expert Jeanne Adlon, professional cat sitter, offers techniques to curb your cat's houseplant-digging behavior.
Up Next

Female Hamster Is Limping, Bleeding And Sad
Why would a hamster be limping, bleeding from her butt and seem sad?