Damaged fins are common when aquarium fish have been fighting, but there are many other situations where fish can be injured.

In aquaria, the most common reasons for injuries in aquarium fish are handling, fighting, fin-nipping, unsuccessful predation and various types of collisions and abrasions.

Chasing fish around an aquarium can cause them to rub against rocks or collide with the glass walls of the aquarium, making physical injuries likely. Even when netted it’s easy for the aquarium fish’s scales to be detached and fin membranes torn. Use the right net to corral aquarium fish, i.e., a fine net when chasing smaller fish, and a larger one for bigger fish. Drive aquarium fish into a plastic container if possible, and remove the fish using that container rather than a net.

Wild-caught fish may become damaged during capture and shipping. Torn fins and missing scales usually grow back without problems, and if the fish is otherwise feeding and behaving normally, such a fish can be bought with confidence. Such is not the case with fish exhibiting damaged jaws or eyes, and these are best passed over in favor of undamaged fish.

Small tears in the aquarium fish’s fins often reveal the presence of fin-nippers, pufferfish, tiger barbs and black widow tetras being amongst the most notorious. Once the nipping fish is removed from the community, fish with damaged fins normally recover quickly.

Tears around the mouth are classic signs of mouth wrestling of the sort engaged in by cichlid fish, halfbeaks and a variety of other territorial or aggressive aquarium fish species. Such wounds usually heal quickly, but only if the aquarium fish are able to establish a stable pecking order and clear territories. The precise solution will vary from species to species; aggression among mbuna for example is often remedied by overcrowding the fish so males cannot hold territories.

Damage to the aquarium fish’s flanks and fins can often indicate failed predation attempts. Besides bites, look out for patches of dead skin caused by run-ins with large anemones such as carpet anemones, farmed clownfish being ironic but not uncommon victims. Choose tankmates with care: bear in mind that most large fish will view smaller tankmates as potential prey, even if both sold as community fish, as with angelfish that will happily catch and eat neon tetras given the chance.

The sudden appearance of wounds on the fish’s head can signify collisions with the hood or the walls of the fish aquarium. Keep fish in aquarium that are the right size for them, and avoid exposing the fish to anything likely to make them jump, for example by turning the room lights on before turning the lights on in the aquarium hood. Although minor wounds will heal quickly, damage to the aquarium fish jaws is very serious, and such damage rarely ever gets better, and aquarium fish with damaged jaws usually need to be euthanized because they can no longer feed themselves.

Abrasions to aquarium fish are usually caused by the wrong substrate. Spiny eels, rays and other burrowing aquarium fish will be damaged by sharp sand and coarse gravel. Secondary infections often follow on from abrasion damage, and these can be very difficult to treat successfully. Catfish and loaches kept in fish aquariums with sharp sand or coarse gravel often lose their barbels as well. Damaged barbels normally grow back quickly once the aquarium fish is moved to a fish aquarium with a safer substrate.

The deep lesions caused by alley cats and herons on pond fish are particularly serious because they go beyond the fish’s skin well into the underlying musculature. Such wounds easily become infected and backyard pond fish injured this way are best brought indoors and treated with an antibiotic, ideally under veterinarian supervision.

The fish’s scales and fin membranes heal quickly, and there’s no need to use an anti-finrot or anti-fungus medication unless symptoms of either of these diseases becomes apparent. On the other hand, if the fish’s damage is severe and there are obvious patches of blood or muscle visible, preemptively treat against bacteria and fungus.

Superficial damage to the aquarium fish’s cornea is visible as slight cloudiness. If aquarium water quality is good, eye damage can heal naturally. But under less than perfect conditions eye damage often gets worse, leading to pop-eye and even the loss of the aquarium fish’s eye entirely. In itself the loss of a fish’s eye rarely seems to cause any long-term health problems, but half-blinded fish may be disadvantaged at feeding time, so care should be taken in this regard, particularly with predatory aquarium fish that hunt by sight.

Dislocated jaws are a common problem among aquarium fish that fight by pulling at one another’s jaws, especially when the two combatants are seriously mismatched. Firemouth cichlid fish regularly suffer this way when kept alongside cichlid fish with stronger jaws, such as convict cichlid fish. Oscars, eartheaters and angelfish are prone to this problem too. Unfortunately, there’s no effective therapy, and if the damaged aquarium fish cannot feed itself it eventually starves to death. Fish jaws are much too delicate to be “popped” back into position, though a vet may try to do so with very large fish. Observe the damaged fish, and if it cannot feed, it will need to be euthanized. 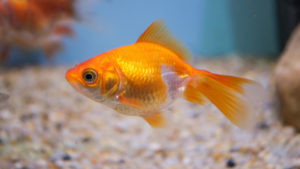 Dreaded Dropsy
Dropsy is an external sign of an internal problem.
Up Next

Regurgitation in Birds
Definitions of words used by pet bird enthusiasts with the pet bird slant.