Cockatiels sometimes hiss at or nip or bite their owners. Other small birds pinch the skin with a nip. This does not necessarily mean that your bird is angry with you. It does mean that you need to determine what your bird is reacting to. Is it naptime and you’re dangling a noisy bell in front of its beak? Is it trying to get your attention?

Zeroing In on the Cause

Your small bird is probably trying to communicate something by biting. Observe his behavior closely for clues.

Are your bird’s wing feathers trimmed? Young male cockatiels are full of themselves, and they are often more tractable and less uppity with trimmed wing feathers.

Your parrot could be letting you know that he needs to potty — observe him closely, and try out that theory.

He could be protective of you and be trying to warn you to get out of the way of an intruder or other perceived danger. He might want to see your reaction.

At what time of day does your parrot nip your ear? How much sleep does your bird get? I ask these questions because I’ve noticed that pet birds need more sleep than we do. When they don’t get it, there’s a “Dr. Jekyl/Mr. Hyde” personality flip in many birds; they become cranky when they are up past their bedtime.

Are you rewarding your bird’s nippiness by paying attention to him when he bites? Maybe he likes that. Birds often crave our attention, even when we think we are giving them negative attention. As a general rule, you want to ignore bad behavior, and reward good behavior, saying: “Good bird” or making a big fuss over your bird. Don’t forget to praise and talk to your bird when he is not biting you — much harder to remember to do!

No Shoulder Riding for Biters

You might want to start training your small bird that shoulders are off limits until its behavior improves. I believe most cockatiels, and other small birds, can safely ride on a person’s shoulder, but the ones that bite shouldn’t be allowed that privilege.

Instead, hold your bird on your hand, or put him on your knee, when you are interacting with him. Of course, at first he will make a beeline for your shoulder. That’s natural behavior, because a cockatiel wants to be on the highest point around, and because he is in the habit of being there.

Make a sharp bend in your elbow when your cockatiel is on your hand so you do not allow him a pathway to your shoulder. Hold your hand at the level of your shoulder, so he doesn’t have a need to get on your shoulder — the “higher perch.” Distract him by offering a treat or a toy. 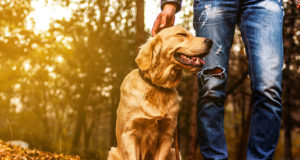 Acorns And Dogs Don’t Mix
Learn about why acorns contain substances that can be quite harmful to dogs.
Up Next

Safe Baths For Sugar Gliders
Is baby shampoo safe for sugar gliders, and do they even need baths?