BeWell / Wellness / The Language Of Hamsters

The Language Of Hamsters

A hamster slinking around its cage, acting quite a bit like a cat burglar isn’t in the midst of stealing anything, it’s simply trying to tell you that something is amiss.

“Often when in pain, a hamster may hunch his back slightly, and take very small steps,” says Dr. Kerry Kraemer, DVM, of Blum Animal Hospital in Chicago. “He may also be restless, and possibly show difficulties in getting comfortable. If you observe this type of movement, be sure to handle the hamster carefully, as pain may cause the animal to bite.”

2. “Wave Your Hands In The Air” Hamster

When curious, hamsters are known to explore the environment by standing on their hind legs and waving their front paws a bit. Hamsters do not have good eyesight, so they rely on other senses–such as touch, taste, scent–to grow accustomed to and explore their surroundings.

“Lethargy and reluctance to move indicate illness, and mean that it’s time to see a vet,” said Daniel Henry Johnson, DVM and owner of Avian and Exotic Care, P.A., in Raleigh, North Carolina.

Hamsters burrow when sleeping, hiding food and retrieving previously hidden food. These three activities are completely normal and done regularly. Sleeping hamsters are easily startled if not woken up before they feel your touch. This can lead to a quick nip or bite.

“Hamsters hiss when they are frightened or aggressive,” says Dr. Jeffrey Jenkins, DVM and owner of Avian & Exotic Animal Hospital in San Diego. “This is a warning. Let your friend settle or be prepared for the consequences!”

Hissing, however, is not the only way that hamsters display fear. Oftentimes, hamsters take on a strange stance, dominated by flashing their teeth and lying motionless on the ground, to communicate that they are feeling fear.

6. “Pretty Please With A Pellet On Top” Hamster

At a time when your hamster stands on its hind legs with its front paws hanging limply it might appear to be begging, but actually it is being watchful. Watchfulness, in turn, can lead to aggression. And aggression can lead to a bite or a nip. A hamster may look sweet and cuddly in a begging stance, but keep your hands away from it at this time.

“A yawning hamster can be stressed or sleepy,” says Dr. Byron de la Navarre, DVM, and owner of Animal House of Chicago in Chicago. “Yawning can also indicate displacement behavior or an aggressive display. Yawning is often visible in aggressive, stressed and pre-sleeping hamsters. The best course of action when you see your hamster yawning is to leave him alone. Wait until the yawn is complete and assess the hamster’s body language before handling him.”

One thing that hamsters are absolute experts at is freezing. This involves your hamster staying in one position for a few minutes, its ears straight up and completely stiff to the touch. When a hamster takes part in “freeze tag,” it’s interested in something and has given its full attention to investigating it.

If you take notice of your hamster grooming suddenly, without prior indication of doing so, something may be amiss. A hamster that begins extensive grooming quite suddenly might be displaying fear. But fear isn’t the only possibility. “Hamsters normally groom themselves, but excessive grooming may indicate skin problems like parasites, or unclean fur, as occurs with diarrhea,” Johnson said. “A veterinarian should be consulted immediately.”

A hamster is most likely to engage in big, loud, deep sniffs during exploration, when it encounters something unfamiliar, such as a tight passageway it cannot squeeze through. This sniff is a hamster’s way of learning more about this foreign place, even though it can’t physically explore it.

“When a hamster grinds his teeth, it is very possible that this means that he is hungry and searching for food,” Dr. Kraemer says. “From a medical perspective, if teeth grinding–bruxism–is accompanied by drooling and a decrease in appetite or anorexia, this could be an indication of pain. One can carefully inspect a hamster’s incisors by scruffing the skin on the back of its neck to expose the incisors and check for damage, overgrowth or incomplete wear.”

Nipping involves taking the skin of a human being between the teeth, and giving a gentle and quick pinch (generally on the hands). Hamsters, being fickle little creatures, might nip when they want attention, or when they are displaying annoyance.

Hamsters are very inquisitive animals. They are full of curiosity and constantly explore their surroundings. To do this, they typically keep their ears perked up and alert. Therefore, when you spot a hamster with its ears laid back against its head, it often means trouble.

Bloating in Kittens
Pet Central helps you learn about why your kitten might be bloated, how you can treat it and prevent your kitten's bloated belly in the future.
Up Next 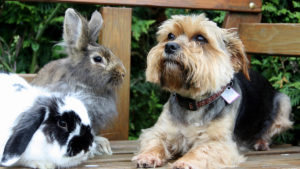 Can Rabbits And Dogs Live In The Same Home?
Pet Central gives you tips on how to make sure your dog and your rabbit can live harmoniously under the same roof.