In case you didn’t already know, Sir Patrick Stewart is a superhero in every sense of the word. The beloved star of “Logan” doesn’t just capture hearts and save the world in ways big and small on-screen, he does it off-screen, too.

The actor has been chronicling his time taking care of his first foster Pit Bull, an adorable pup named Ginger, on his Instagram page. And it’s pretty much the sweetest, cutest thing you’ll see on the Internet.

From their first meeting at home in which Ginger gives the star a warm, wet greeting to playing by the pool and taking a Sunday snooze, it’s clear to see Stewart and his wife Sunny Ozell are the perfect foster parents.

Ginger—who came into Stewart’s life thanks to the ASPCA and Wags and Walks in Los Angeles—has definitely won over her foster parents (in his first post with her, he wrote, “I’m in LOVE”) to his hundreds of thousands of followers.

As if Stewart wasn’t already amazing enough, he’s reminds his fans that, “Rules and consistency are everything as a foster dog parent” and to “#AdoptDontShop.”

While the Instagram posts are more than enough to ensure Ginger finds the perfect forever home, the “Star Trek” icon even talked about her during his recent visit to “Conan.”

After revealing that Ginger is his first dog in 50 years (his Border Collie passed when he was a young boy), he also informed host Conan O’Brien that Ginger was, sadly, a breeding dog in a fighting ring before she was rescued. 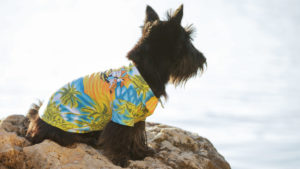 Pet Travel Gear for a Stress-Free Getaway
Discover the best pet travel gear for traveling with pets, like a car seat for dogs. If you’re flying with pets this summer, find the best pet carriers for every pet.
Up Next

Picasso, the Dog With the Crooked Face, Wins Hearts Everywhere
Meet Picasso, the dog with the (adorably) crooked face. Named for his unique visage, this pup went from the shelter to capturing the hearts of the nation.