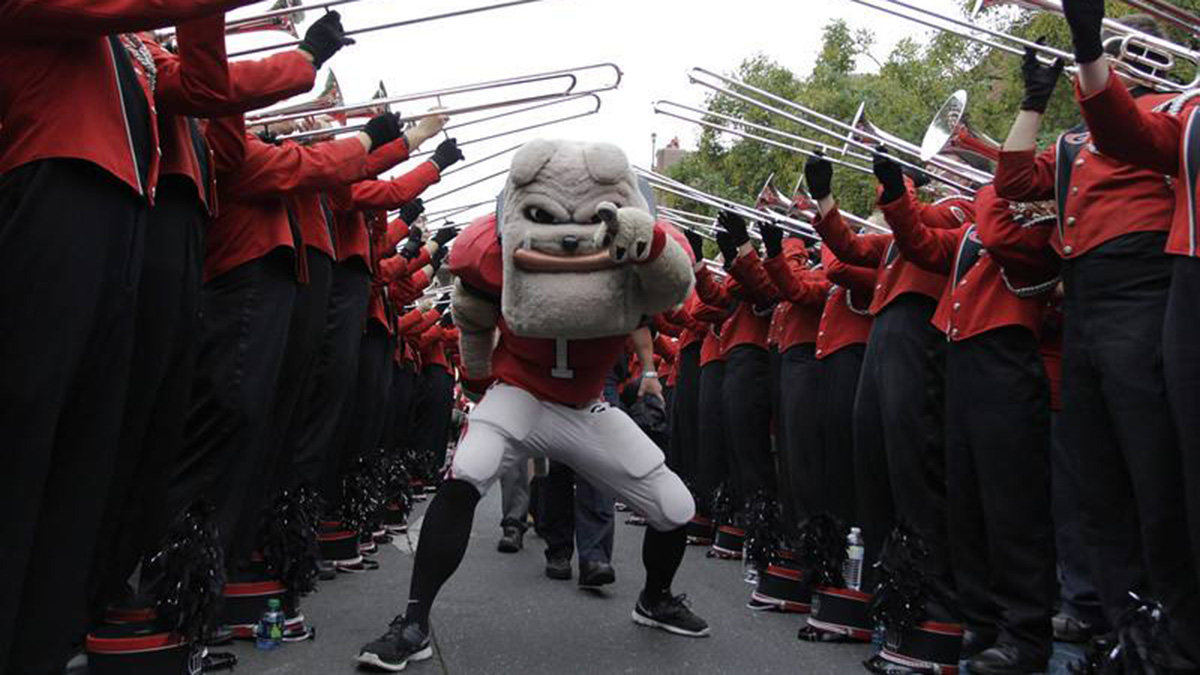 Pumpkin lattes and back-to-school gear are now available. That means one thing: College football season is here. To celebrate, we rounded up a list of our favorite animal mascots. Some are lovable pets, some are more wild, and some are just plain weird. Keep reading to find out if your university’s mascot made the cut.

The Boston Terrier is the perfect fit for Boston University’s mascot. The terrier was first bred in Boston in 1869, which was the same year the University was chartered by the state of Massachusetts. Although the student body was allowed to choose between several mascots—including a moose—they officially picked the dog breed to represent them in 1922.

While the terrier weighs no more than 25 pounds, BU’s mascot is bit bigger than that. The costumed mascot named Rhett stands 6’3″ and weighs 200 pounds, and proudly wears the colors scarlet and white. He’s named after Rhett Butler in Gone With the Wind because no one loves Scarlett like Rhett.

But not just anyone can don the Rhett costume. Students that apply must write an essay on why they have what it takes to be Rhett, according to Dan Mercurio, director of marketing and strategic planning in the Department of Athletics at Boston University. The students with the best essays get to put on the suit for an official tryout. Ultimately, only a handful are chosen to wear the costume to hundreds of on-campus and off-campus events each year.

University of Delaware’s mascot, YouDee the Fightin Blue Hen, looks like a mix of Foghorn Leghorn and Woody the Woodpecker. “He’s a proud, cocky bird with a puffed up chest that struts his stuff like he’s big man on campus,” says Chad Mills, coach of the University of Delaware mascot team. “But he’s never too proud to help an old lady cross the street and blow her a kiss.”

In Delaware, YouDee is more than just a goofy-looking mascot, though. The actual blue hen chicken is a symbol of state pride. During the Revolutionary War, troops in the Delaware regiment amused themselves by staging cockfights. A breed known as the blue hen, recognizable for its blue feathers, were known to be ferocious in fights. Soon, Delaware companies that dominated on the battlefield were nicknamed the Blue Hens. In 1939, the blue hen was named the official state bird.

The University of Delaware student body loves their blue hens so much that they introduced another mascot. Baby Blue, YouDee’s younger sibling, was born in 1999. Both YouDee and Baby Blue lead the spirit teams and football team on to the field every football game, says Mills.

The University of Georgia has one of the nation’s most popular mascots. Uga the English Bulldog, who gets his name from an abbreviation of the university, can be spotted hanging out in his air-conditioned doghouse located next to the cheerleaders during football games. He sports a custom-made red dog sports team jersey that’s made of the same material as the players’ uniforms and a spiked collar.

Nine dogs have carried the name Uga since 1956, and the line of pure white English Bulldogs is owned by the Frank W. “Sonny” Seiler family. Past Ugas are buried in marble vaults near the main gate of Georgia’s Sanford Stadium, where flowers are placed before each home game.

No one really knows how the tiger came to be Clemson’s mascot, according to Sam Blackman, assistant athletic communications director at Clemson and author of Clemson: Where the Tigers Play. But one of Blackman’s favorite theories—and probably the most plausible—revolves around the school’s first football coach Walter Merritt Riggs in 1896. The players wanted to honor Riggs, a graduate of Auburn University, so they chose the same tiger mascot as his former college.

It wasn’t until 1954 that a student adorned the mascot suit, though. And if you’re chosen to be the tiger, you have to be in shape. The reason: Every time Clemson scores, the tiger performs pushups equal to the school’s score. No easy feat, considering the costume’s head weighs 20 pounds alone, says Blackman. The all-time pushup leader is Mike Bays (’94-’97), who pumped out 2,216 reps in his career.

Siberian Huskies are known for their endurance and willingness to work—so it’s no wonder the University of Connecticut students voted for the dog to be their mascot in 1933. Since then, 14 huskies have acted as Uconn’s mascot. They were all named Jonathan for Jonathan Trumball, Connecticut’s Revolutionary War-era governor. The current one, Jonathan XIV, was born on October 5, 2013. Unlike almost all of his predecessors, Jonathan XIV is not pure white with one brown eye and one blue eye. He’s black-and-white—like the very first Jonathan—with two bright blue eyes. As for the costumed version of Jonathan, the identities of the four students selected to wear the costume remain a secret on campus every year.

The slippery, slimy yellow Banana Slug mascot doesn’t strike fear in the hearts of opponents, but that’s the point, according to the University of California, Santa Cruz. Since the school’s founding in 1965, it’s physical education philosophy has been that the joy of participating is more important than winning. So when the campus’s intramural and co-ed teams chose a mascot, they wanted an animal that contrasted with other schools’ fierce mascots. Enter: a slow shell-less mollusk that dotted the redwood floors around the school.

When UCSC joined the NCAA Division III in 1980, the chancellor had to select an official school mascot. His choice: the sea lions. Students weren’t having it, though. Even after a giant sea lion was painted in the middle of the basketball court, they continued to call themselves the banana slugs. Finally, after 5 years of two mascots, students voted five-to-one in favor of the mollusk. Now, the grinning giant costumed slug named Sammy appears at sporting events around campus and Sports Illustrated once named the banana slug the nation’s best college nickname.

Some Carnegie Mellon students began dressing up as Scottish terriers in the 1950s as a homage to founder Andrew Carnegie’s heritage. But it wasn’t until 2007 that the dog became the school’s official mascot. Nowadays, you can find the giant costumed terrier dressed in tartan—a twilled woolen fabric that’s associated with Scotland—around campus promoting events. “There are no formal tryouts to become Scotty,” says Andrea James, associate sports information director at Carnegie Mellon. “It’s mostly through word of mouth, and the current performer gets to recruit his or her replacement.”

But the costumed version isn’t the only Scotty you’ll see on campus. After speaking at commencement in 2007, comedian and dog-lover Bill Cosby decided Carnegie Mellon needed a live mascot. He gifted the university a Scottish terrier puppy that’s taken care of by one of the university’s engineering professors.

What the heck is a horned frog? Looking at TCU’s costumed mascot named SuperFrog, you might think it’s a mutant relative of the Teenage Ninja Turtles. But in real life, the horned frog is actually a lizard that can squirt a four-foot stream of blood from its third “eye” when it’s angered or scared.

The Horned Frog has been TCU’s mascot since 1897, and he’s evolved dramatically over the years. Originally named Addy the All-American Frog after the university’s founder’s son, Addison Clark, Jr., the mascot had a papier-mâché head and crescent grin. Now, the mascot is called SuperFrog, and he wears a a costume made from strong foam composite. He has muscular arms and legs, shoulders like boulders, and tons of horns. And since it can get hot in Fort Worth, the suit comes equipped with a battery-operated fan in the head, ice packs, and a cooling vest. The one feature we’re still waiting for: that third “eye.”

In 1932, University of Maryland football coach Dr. H. Curley Byrd recommended that the Diamondback terrapin become the official school mascot. The terrapin is a native turtle to the Chesapeake Bay and the Maryland State Reptile. Before this time, Maryland teams were called the Old Liners, a reference to the state’s nickname “The Old Line State.”

A year later, a 300-pound bronze replica of a Diamondback was constructed and brought to campus. They named the sculpture Testudo, probably after the scientific classification for turtle, testudines. Unfortunately, Testudo has fallen victim to kidnapping and vandalism—usually from rival schools—over the years. Eventually he was filled with 700 pounds of cement and placed on a central campus perch where he remains today. Go up to him, and you might notice his face is extra shiny. That’s because It’s believed that rubbing his nose brings good luck.

The athletic teams at the University of Richmond weren’t always called the spiders. From 1876 to 1893, they were known as the colts. But in 1894, a team made up of Richmond athletes and city residents called themselves the spiders after a sports reporter used the term to refer to the pitcher’s lanky arms and legs. The name stuck and became the school’s official mascot.

Until a few years ago, the costumed spider mascot was a red-and-black, smiling spider that looked a lot like a ladybug. Looking for ways to promote the athletics department in 2011, students got to vote on a new costume. The winner is a headband-wearing, muscle-bulging gray spider named WebstUR.

Shortly after the school changed its name from the Western University of Pennsylvania to the University of Pittsburgh in 1909, the panther was adopted as its mascot during a meeting of student and alumni leaders. The group choose it for several reasons, including that the animal was the most powerful creature to roam the area, no other college or university had it as a mascot at the time, and panther and Pittsburgh alliterated.

Nowadays, more than 20 representations of panthers can be found around the campus. Fans, alumni, and students rub the nose of one pure bronze panther sculpture in order to bring luck to the university’s athletic teams. The costumed panther suit was named “Roc” in the 1990s to honor Steve Petro “the Rock,” a former football player, assistant coach, and athletic department assistant.

The elephant became Alabama’s mascot thanks to a sports writer named Everett Strupper in 1930. During the school’s first home game against Ole Miss, Strupper reported that he heard a fan yelled “Hold your horses, the elephants are coming” as the team in crimson jerseys ran out onto the field. “It was the first time that I had seen it, and the size of the entire eleven nearly knocked me cold,” he wrote. “Men that I had seen play last year looking like they had nearly doubled in size.” From that day forward, people referred to the Alabama linemen as the Red Elephants. The team went on to become National Champions.

During the 1940s, a live elephant named Alamite was kept on campus. He was brought out on gamedays, and for several years he carried the homecoming queen into the stadium before kickoff. But the costumed mascot that looks like a giant stuffed animal didn’t make it’s official debut until the 1979 Sugar Bowl. Students named him “Big Al” by popular vote.

How To Make Your Garage Pet-Friendly
Make sure your garage is a safe place for four-legged family members.