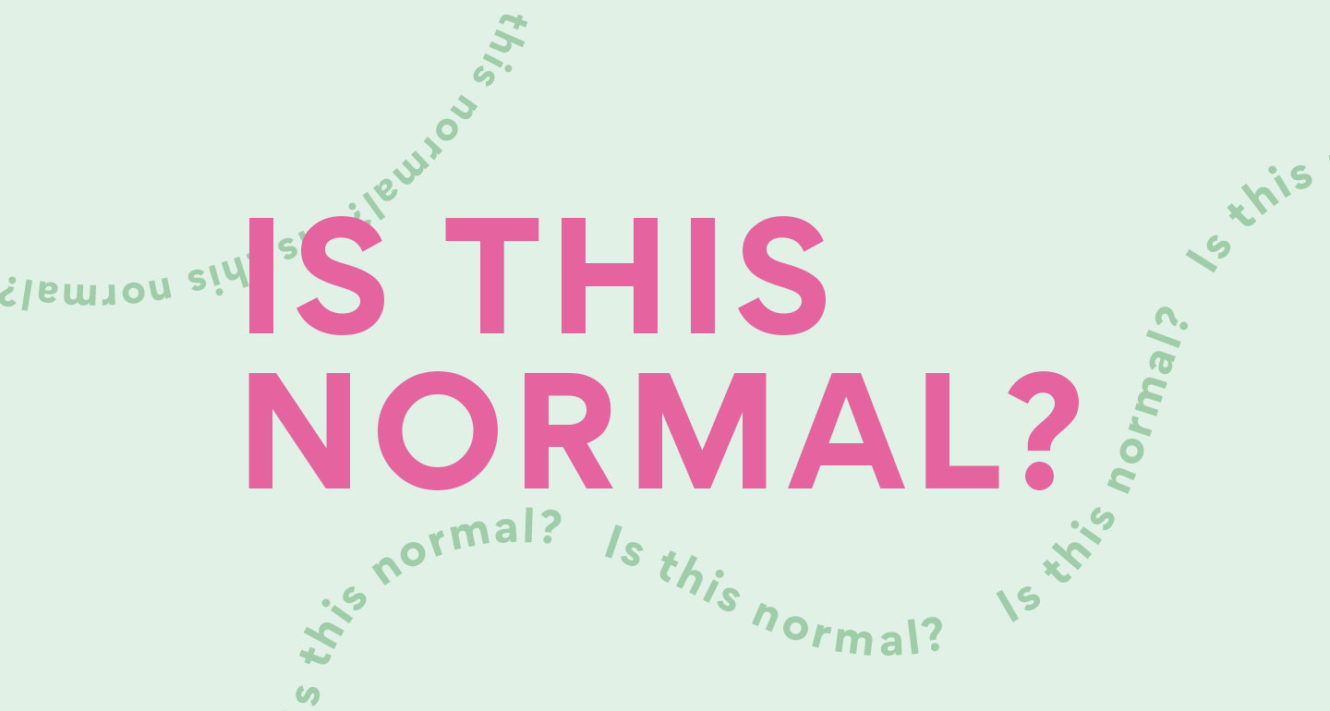 BeSmart / Get Answers / Is This Normal: Why Do Dogs Like to Roll In the Grass?

Is This Normal: Why Do Dogs Like to Roll In the Grass?

My dog rolls in the grass every time we go outside. Why do dogs like to roll in the grass? Is this normal?

A: Yes, it’s definitely normal. Not only does it feel good to them, they might actually be programmed to do it.

It doesn't matter whether you're in a beautifully landscaped city park, in your own front yard, or standing beside a scruffy patch of grass while you have a socially distanced conversation with a neighbor: At some point, your dog will probably roll onto their back, shimmy across the ground, and... wait, are they smiling?

Why do dogs like to roll in the grass like it’s the best thing since sliced bread? Jill, a Virginia-based nurse anesthetist, says that all three of her rescue dogs enjoy a good grass-shimmy, but her dog Weezy seems to enjoy it the most. "Weezy rolls every time she goes outside, whether the grass is wet or dry," Jill says. "She doesn’t look for a particular spot; she just starts rolling back and forth like it's the most wonderful thing in the world."

That's because, to her, it probably is! Melanie Cerone, Ph.D., CPDT-KA, a certified professional dog trainer and canine behavior consultant based in Newtown Square, Pennsylvania, says that although this behavior hasn't been specifically studied, dogs most likely do it so they can rub a particular scent all over their bodies.

"It’s important to remember that behavior is always a combination of nature and nurture—of biology and the environment," she says. "So, while there’s likely an instinctual component to 'scent-rolling,' dogs also engage in this behavior because it’s reinforcing to them in some way. They may do it to relieve an itch or because it just feels good. Dogs certainly seem to love it!"

Aside from grass, another thing that dogs seem to love rolling around in are the kind of things that, uh, don't exactly smell like Yankee Candle scents. "Weezy hasn’t ever rolled in anything stinky, but the other two most definitely do," Jill says. "In fact, I rarely see Aspen or Pig roll in the grass unless they are rolling in some putrid pile of death."

So, is that part normal too? Unfortunately for our own non-canine sense of smell, it sure is. "Some dogs love to roll in dead animal carcasses or stool because it's another way to mask their scent," explains Brianna Dick, a dog behaviorist, trainer and the owner of Pack Leader Help: Rehabilitation & Training in Alexandria, Virginia. "Masking their scent makes it easier for dogs to sneak up on prey. It's essentially a byproduct of evolution for dogs, similar to how we still grow arm and leg hair even though we no longer need it to keep us warm––because we have clothes."

Whether it’s grass or less pleasant things, Dick says that certain dogs may be more prone to scent-rolling, like those with "prey drive" or stronger hunting instincts. "Although most dogs like to roll around because it smells good and feels good," she adds.

Cerone says her dog always seems to find "the foulest, smelliest pile of whatever" to roll through right after he's had a bath. "Dogs, like wolves, are interested in odors, lots of odor," she says. "My dog scent-rolls in things I can’t smell at all sometimes, so I imagine it’s just we humans who think they only roll in vile things, because that’s when we notice it."

Most of the time, scent-rolling is just your dog being a dog, but if they’re doing it more frequently or if they seem to focus their efforts on one specific body part, both experts agree that it could mean that they have a skin irritation that may need to be checked out. "Also, a dog who just rolls on his back and stays there might be performing an ‘inguinal’ display, which is generally a way of saying that they aren’t a threat and to please not hurt them,” Cerone adds. "This is definitely a sign of stress."

But just shimmying through the grass or (sigh) through whatever smelly situation is happening on top of it is totally fine—especially if they're as blissed out as Weezy is. "She just absolutely looks like she's in heaven when she's rolling," Jill says.

Is This Normal: Why Do Dogs Follow You Into the Bathroom?

Do Dogs Get Bored? 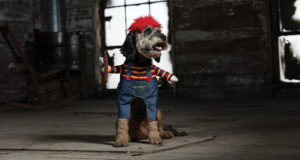 This Halloween, Scary Dog Costumes Are as Easy as 1, 2, Scream
From classic Halloween characters to horror film favorites, Chewy has many easy and affordable scary dog costumes for dressing up your dog this year.
Up Next 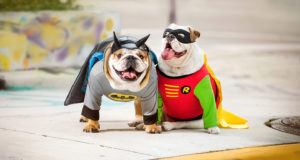 Your Dog Will Save the Day With These Halloween Superhero Costumes
Bring out your dog’s inner crimefighter this Halloween with one of these dog superhero costumes.