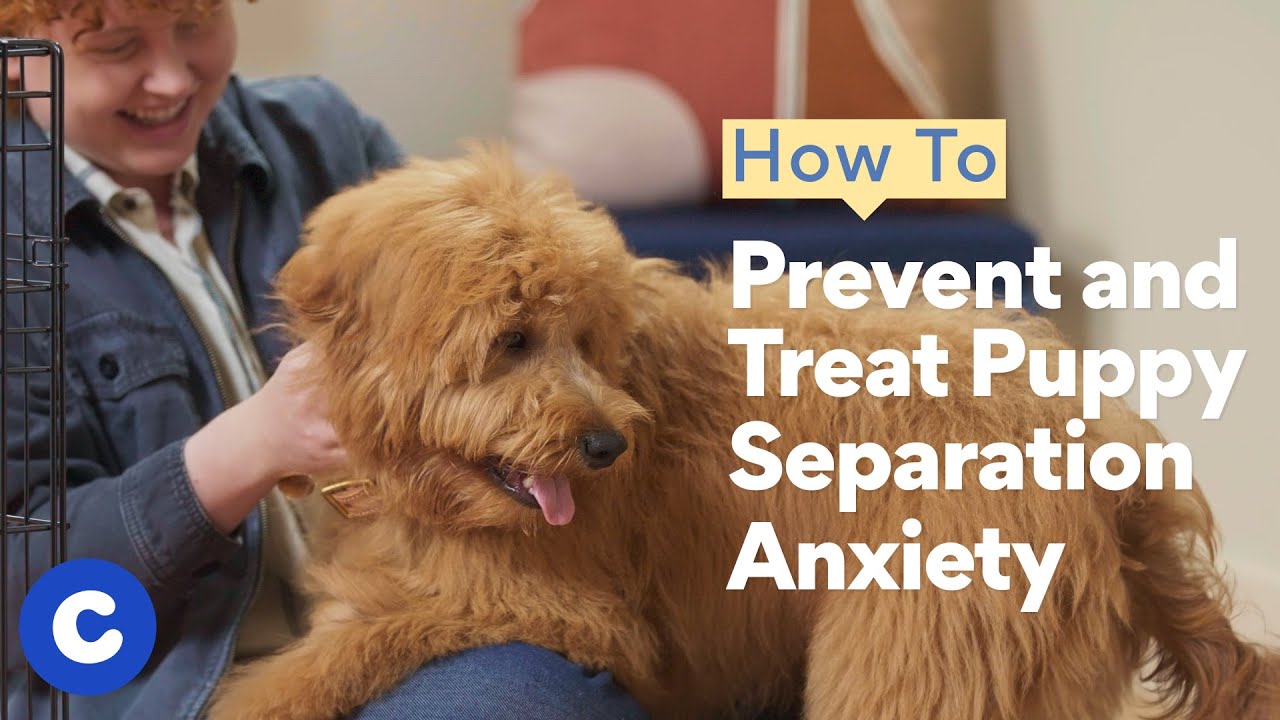 How to Treat and Prevent Puppy Separation Anxiety

We talked to Dr. Jennifer Coates, DVM, a veterinarian consultant in Fort Collins, Colorado; and Atlanta-based dog trainer and author Victoria Schade to bring you their top tips on soothing an anxious puppy—so you can go about your day knowing your pup is safe and happy at home.

Does My Puppy Have Separation Anxiety?

Before we delve into how to treat puppy separation anxiety, let’s take a moment to define the phrase.

A stress response a dog experiences when they are separated from the people to whom they are bonded, even for short periods of time.

“That sounds just like my puppy!” you’re thinking. But don’t fret just yet. There’s a world of difference between clinical separation anxiety and separation discomfort, a reaction that’s less intense and much more common, Dr. Coates says.

The general nervousness or unhappiness a pet feels when their person leaves.

It's natural for your puppy to feel separation discomfort, aka mildly unhappy or anxious when you leave—you’re their favorite person, after all! But true separation anxiety is a debilitating reaction to your absence. And while the signs of each type of anxiety can look similar, true separation anxiety symptoms are generally more extreme and last for longer periods of time than for a puppy who’s just learning how to be comfortable when alone.

Think of it in human terms: It's normal to be nervous when faced with a new situation, like going to a party where you don't know many people. But someone with a clinically diagnosed social anxiety disorder may become so paralyzed with fear that they can't function under the same circumstances. It’s the same way for our pets. Many puppies and dogs prefer to be with "their" people rather than left alone and may whine or act clingy when they know you're leaving. That can be difficult to see, but it’s not true separation anxiety. Dogs with separation anxiety become so upset when left alone that they can develop destructive behaviors like chewing, digging or inappropriately urinating or defecating.

True separation anxiety in puppies is rare, Schade says, in part because it doesn’t usually take much to distract a puppy. A tasty treat or super fun toy typically lifts their spirits within a few minutes. So take heart: The symptoms you’re noticing in your puppy aren’t likely to reflect severe distress—just a discomfort that’s both natural and common.

What Are the Signs of Puppy Separation Anxiety and Discomfort?

Signs that your puppy may be nervous about being alone include:

Of course, some of these are totally normal things to expect from a young pup. So how can you tell the difference?

Start with the vocalizations. Distressed puppy barks and whines are often repetitive and, in the case of barks, high-pitched, says Schade. They also can go on for extended periods—in some cases, for the entire time you’re away. If your puppy’s barks are lower in pitch, intermittent or only last a moment or two, they may just be testing out their voice.

What about chewing? Take a look at their targets. An anxious puppy might dig or chew at their crate or bedding instead of the toys you’ve so lovingly provided. (Of course, some pups destroy their bedding due to boredom or teething, too, so if that’s your puppy’s only symptom, it doesn’t necessarily indicate separation discomfort or anxiety.)

While these symptoms may start as you prepare to leave home, it’s how long they endure that can help you determine if you’re dealing with separation discomfort or clinical separation anxiety. Puppies who are simply learning to be alone usually calm down after a short period—within five to ten minutes. Think of it as taking a few minutes to “settle in”— vocalizing or pacing before relaxing with a toy or falling asleep.

A puppy with true separation anxiety, on the other hand, is more likely to whine, pace or dig the entire time they’re left alone, even if they have a treat-stuffed toy within paw’s reach. That’s a sign there’s something deeper going on than simple discomfort.

Besides the natural discomfort of being away from you (your pup’s favorite person in the whole wide world, of course) there are a few common causes for puppy anxiety—and many of them have to do with their crate. Using a dog crate as your pup’s own personal space has plenty of benefits, including helping them feel calm. But if the crate is used incorrectly, it can have the opposite effect. To prevent anxious feelings for your puppy, avoid these common mistakes pet parents make with dog crates:

How to Treat Your Puppy’s Separation Anxiety or Discomfort

Here’s the good news: There’s plenty you can do to soothe your anxious puppy. Follow these tips to give your dog the confidence they need.

Hey, if you want your dog to feel comfortable in their den, you’ve gotta provide one that fits them! Remember: Your dog’s crate should be big enough that your puppy can stand up, turn around and lie down comfortably inside. But it shouldn’t be too much bigger than that—the goal is for it to feel like a cozy little den just for them.

For puppies, experts suggest using a larger crate that comes with a divider. That way, you can use the divider to create a smaller space when your puppy’s young, and move it or remove it entirely when they’ve grown older (and larger).

2Make the Crate a Positive Space

Your puppy’s crate should be their absolute favorite spot (next to your lap, of course). And there are plenty of ways to inspire your dog to love their den. First, make sure it’s a comfortable place for them to be, with a crate-sized pad to lie on. Blankets or clothing that smells like you can help them feel secure in there, too.

Another sure-fire method: Reward your puppy for going inside the crate! When you catch them hanging out in there, shower them with tasty treats or their favorite toys. Treat-dispensing toys and safe chew toys are ideal for distracting puppies from the fact that they’re alone. (Just make sure to supervise your puppy playing with any new toy, to ensure they can’t chew or break it into pieces that could become safety hazards.)

With proper training, some puppies will even race to their crate when they get home, because they know they’re going to get a busy toy inside. Now that’s a sign you’re pet parenting right!

3Play With Your Puppy—a Lot

You know what they say: A tired puppy is a happy puppy. A tired puppy is also more likely to sleep than to worry about where you’ve gone. So before crating your dog and leaving the room, you’ll also want to give them lots of attention. Take them for a walk or a vigorous play session—or both!—and of course, make sure they get one final chance to potty before settling into their crate with those yummy toys and treats.

Once you’ve established the crate as a fun puppy haven, don’t leave them for a few hours right away. Gradually leave them alone for short increments, monitoring their behavior using a pet cam. The first time you leave, it may be just for a few seconds. When you return, keep your energy low-key to convey to your pup that coming and going is all a normal part of daily life.

When your puppy is able to stay calm for those few seconds, work up to one minute, then 5, then 10 and beyond. Progress slowly and let your puppy set the pace. And remember to respect your puppy’s potty limit: They should never be crated longer than one hour for each month of age, up to a maximum of four hours in a row.

My Puppy Is Still Anxious—Now What?

If you’ve followed all of these steps and your puppy remains anxious—not settling down soon after you leave home or injuring themselves trying to escape their crate—it’s time to talk to your veterinarian. They can suggest other tactics, like anti-anxiety medications or a behavior modification plan, to help soothe your puppy’s separation anxiety.

Learning how to be apart from their parents is an essential part of growing up for any puppy—and for some pups, that’s a difficult transition. But don’t stress. Over time, your pup should learn that a little alone time is nothing to be afraid of—and that the minute you come back through the door is the best time of the day.

How Do You Clean a Dog’s Ears? Follow This Vet-Approved Step-by-Step Guide
Don’t know how to clean dog ears? Follow our vets’ advice on washing dogs’ ears, from when it’s time to clean to a step-by-step guide to the process.