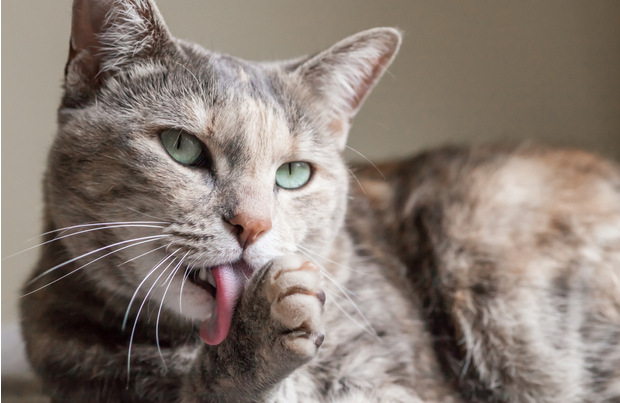 You probably already knew that your cat is a fastidious groomer, but did you know that cats actually spend between 30 and 50 percent of their waking hours grooming themselves?

“Grooming includes anything like licking, scratching or nibbling,” says Beth Adelman, a cat behavior consultant. “They also shake and sneeze to clear their nasal passages, which some consider grooming as well.”

While the frequency with which your cat grooms herself might not come as a surprise, there are probably some other fascinating facts about cat grooming that you didn’t know. Here are a few:

Cat Grooming Is a Cooling Mechanism on Hot Days

Imagine how you would feel on a super hot day if your body couldn’t sweat.

“Cats have a limited ability to sweat,” says Adelman. “They have sweat glands on their paw pads, but other than that they do very little sweating.”

Instead, during hot weather, the evaporation of saliva left over after grooming can actually help cool them down.

Cats Can Lick Between Their Shoulder Blades

While it would be very difficult (impossible, actually) for a human to clean their backsides with their tongue, cats don’t have collarbones, says Adelman, which makes it possible for them to turn their heads completely and lick between their shoulder blades.

Particularly for cats that suffer from over grooming—also known as barbering—a type of obsessive behavior may be a sign of some underlying health issue.

“Oftentimes in recent years, people jump to the notion that their cat has a compulsive behavior issue,” says Steve Dale, cat behavior consultant. “In truth, the first step when your cat is exhibiting signs of over grooming should be to rule out any medical conditions, then to rule out allergies.”

For example, if your cat is suffering from back pain, she may be more likely to groom that particular area. On the other hand, not grooming in one particular place could also be in indication of arthritis, says Adelman. Behavior like this is a sign to bring your cat to the vet.

Cat Grooming Can Be an Emotional Behavior

Grooming is also known to have a displacement benefit in cats. In other words, it’s something a cat may do when she is aroused.

“For example, little kids jump up and down when they’re excited,” Adelman says. “That’s displacement behavior. When cats get very tense or stressed or aroused, they might groom as a response to that to dispel those feelings.”

While your cat’s fur is necessary element to create a fur ball, it’s your cat’s tongue that causes this reaction.

“Cats groom with their tongues, which have down-center little hooks that point towards the back of their throats,” Adelman says. “Once something is stuck in the hook, because it points back, they can’t spit it out, they can only swallow it.”

So, if fur gets caught in one of these hooks when your cat grooms herself, there’s nothing she can do but swallow that fur, eventually creating a fur ball.

When cats groom each other it’s referred to as allogrooming, or social grooming, Adelman says, and it usually occurs around the head and neck.

“We’ve never really seen cats naturally allogroom each other in places other than these areas, so we assume that cats really best tolerate touching in general in these spots,” she says. “The purpose of allogrooming is to cement bonds because it’s very personal, but it also creates a group scent, which is helpful in the wild. It says to the world, ‘we’re a pack, we smell the same.”

“Some are guard hairs, which are rough and stick out more, and some are softer, more like down, for insulation,” she says. “Each of these hair follicles has a muscle, which can make the guard hairs stand up. This is how cats raise their hackles.”

The surface of your cat’s hair has overlapping cuticle cells which point away from the body, so when you stroke your feline friend in one direction you’ll get a smooth feeling, whereas stroking the other way will produce a rough one.

“That’s why your cat grooms herself right after you’ve pet her, even though you might think she doesn’t like to be pet at all,” Adelman says. “She’s actually just rearranging her hair follicles into the right place again. It’s also another good reason to brush and stroke in the direction of the hair.”

Indoor Cats Get Fleas, Too

A common cause of excessive grooming with outdoor cats is pesky fleas, but it’s not uncommon for indoor cats to get fleas, too. If your indoor cat is over grooming, don’t completely rule this option out, says Dale.

“So often we assume that, because our cat lives on the 88th floor of a high rise, there’s no way she can get fleas,” Dale says. “[But] the dog of a neighbor could have fleas. A visitor could bring in fleas on their shoes or pants. It happens every day.” 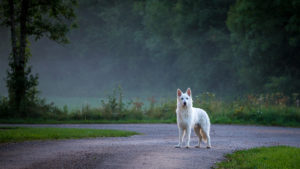 Boo! Can Dogs See Ghosts?
If your dog barks at a wall or starts quivering in her coat, you may be wondering, "Can dogs see ghosts?" Find out if dogs have a sixth sense and if, in fact, they can sense the supernatural.
Up Next 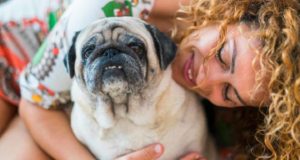 Senior Dog Care: How to Best Care for Old Dogs
Old dogs, even if they are young at heart, need some extra attention when it comes to their needs and wellness. Follow our senior dog care tips so you can know exactly what your senior dog needs to feel his best.