BeWell / Wellness / Did My Cat Have Cancer?

Did My Cat Have Cancer?

My 10-year-old cat Socks suddenly began to lose weight in January, despite a normal appetite. He lost between two and three pounds. Blood tests at the veterinarian’s office revealed that his white blood cell count was high, and he had a slight fever. He was put on cat antibiotics and vitamins. He soon lost his appetite for soft cat food. I gave him chicken and turkey breast for about a week.

My veterinarian then put him on a prescription cat food (duck and pea formula), but he did not want to eat that either. I fed him Fancy Feast for the last two months. He began eating normally, got his full appetite back and seemed to be acting like himself. However, this past Thursday, I came home and found him cowering in the corner, walking very slowly with no energy.

I brought him to the vet Friday morning. He was very dehydrated and had a kidney infection. The blood work showed a high white blood cell count and a low count on antibodies to fight off infection. They did a sonogram of his chest and abdomen. He had fluid on the chest and in the abdomen. They also saw two masses in the chest. The doctor said he most likely had cancer. They kept him at the vets for six days. When I brought him home, he could barely walk. His hind legs were weaker than the front. His heart also was racing. He had not been eating much for six days. He was sent home with vitamin supplements, antibiotics and medicine that is used for cancer in dogs.

I lost my Socks the next day. He was acting normal. Why all of a sudden could an animal fall fatally ill and die. Do you think he had cancer? Please get back to me; I am heartbroken.

I offer my sincerest condolences on the loss of your cat Socks. Of course I cannot be certain, but based on some of the information you’ve given me in your letter, I do believe your cat did have cancer. Sudden, rapid weight loss is a very common sign in cats with cancer, and your cat’s weight loss in January is suspicious.

Fluid in the chest cavity and the abdominal cavity is another finding that is consistent with cancer. The most telling sign, based on your letter, is the presence of the two masses in the chest. While there are several possible things that these could be (abscesses, granulomas or cysts), cancer by far is the most likely.

I see a great deal of cancer in my cat practice, and the number of cases seems to increase dramatically every year. I think this is due to the longer life span we’re seeing in cats. Cancer is more common in older animals, and due to medical advances, cats are living longer than ever before. The cancers that I see in cats that are 15 and 16-years-old would not have developed in these cats when their life spans were only 13 to 14 years. It’s an ironic price that we pay, I suppose, for the medical advances that result in such longevity.

In regard to your question about how cats seemingly can be normal one moment and sick the next: Cats are notorious for not letting you know that they’re sick until they absolutely cannot hide it any longer. They’re programmed this way. Predators pick on the sick ones, and cats have figured out how to hide the fact that they’re sick, until they’re really sick. By that time, their illness often is fairly advanced, and there’s often not much we can do in terms of therapy. It makes being a feline practitioner quite a challenge. 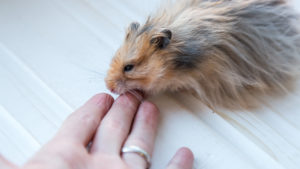 How To Stop A Hamster From Biting
Pet Central gives you advice on how to stop hamsters from biting.
Up Next

Smart Ways to Ease Your Cat’s Allergies
Find out if hair loss in cats and other symptoms are a cat skin condition or a sign of an allergy by learning what may be causing your itchy cat to scratch and lick.