Cat Breeds: Why We Love the Maine Coon Cat

The Maine Coon is one of America’s favorite cat breeds, ranking in the top five of the Cat Fanciers’ Association annual list of the most popular cat breeds since the 1990s. These mild-mannered felines have certainly earned their spot as America’s sweethearts. A Maine Coon cat won “Best Cat” in one of the first U.S. cat shows in 1895, and that’s when Americans first fell in love. They enjoyed their position as top cats for a long time, but our fickle relationship with the Maine Coon led to a fall in its popularity. In the early 1900s, Americans became more than a little obsessed with exotic longhaired cat breeds like Persians and Angoras, and all but abandoned the cuddly behemoths known as MCs. But the Maine Coon came back into favor in the ‘50s as cat fanciers regained interest. In 1968, a small group of breeders stepped in and formed the Maine Coon Breeders and Fanciers Association to rescue and rebuild the breed. As a result, the Maine Coon cat thrived once again.

Lucky for Maine Coon cat fans, they’re back for good and more popular than ever. What is it about this breed that we love so much? If you’re a prospective Maine Coon adopter and new to the breed, here’s a rundown of everything MC, including appearance, the Maine Coon temperament and recommendations for food and care. And if you’re a Maine Coon pet parent already, you might recognize your hefty, endearing fellow in this breed synopsis.

Although there are many stories and much speculation about the origin of the Maine Coon, there is some truth to be told. It is indeed a natural breed that’s one of the oldest native cat breeds in North America. The state of Maine even recognized the Maine Coon cat as its official state cat in 1985. So it’s safe to say that America’s undeniable love for these gentle creatures has a long history. But how did they end up in Maine to begin with? Most likely, they came about when domestic shorthaired cats started to mingle with exotic longhaired cat breeds. Two likely contenders are the Turkish Angora, brought over by American sailors, and Norwegian Forest cats that came over with the Vikings. Popular folklore goes a step further to propose that the Turkish Angoras belonged to Marie Antoinette. It’s said that she loaded up her prized kitties and other possessions on a ship bound for the U.S. in an attempt to escape from France. Another tale talks about an English sea captain named Charles Coon, whose ship often docked in New England. While at port, the longhaired cats he kept onboard spent some time with the local felines, and soon, longhaired kittens started popping up around town. As a rural feline, the Maine Coon cat became close with humans in farming communities, and they began to steal our hearts.

If you’ve seen a Maine Coon, you know they’re pretty big. They’re actually the largest cat breed we have in America. There are three sizes: big, bigger and biggest. Okay, but seriously, the general weight range is about 9-15 pounds for females and 13-18 pounds for males, although they can be larger. They can stand over a foot tall, and a purebred Maine Coon named Stewie holds the record for the longest cat who ever lived at just over 4 feet long! A Maine Coon cat also holds the title for longest cat whiskers, by the way.

Their bodies are rectangular, strong and sturdy, and they can take anywhere from one to five years to reach their full adult size. The coat can be pretty much any color with any coat pattern, except for pointed. Most often, you’ll see them as brown tabbies, but a Maine Coon cat can also be solid, tortoiseshell, calico and many other tabby colors. And their eyes, which are large and round, can be green, gold or copper. These cats have fur for days—especially on their bushy tails and in their thick manes. They even have lots of fur on the underside of their huge paws, which makes sense for this northern-bred cat to be able to navigate the snow. A Maine Coon’s hair is long, but silky if brushed regularly, and is longer on the stomach and back side.

Not Your Average Cat

The Maine Coon personality is anything but ordinary. With their impressive size and one-of-a-kind Maine Coon temperament, you might be able to pass them off as dogs. Most everyone will describe a Maine Coon cat as a “gentle giant,” which alludes to their calm nature. It’s as if these large cats see themselves as kittens that never grew up, and that’s true right down to their tiny voices. Instead of the deep, commanding meow you’d expect, when they open their mouths, what comes out is a high-pitched cry. Some Maine Coon owners say it’s a sort of chirping or trill-like noise. These kitties will use their special cry to let you know exactly what they need and when they need it. Usually, the purposeful meow is accompanied by a direct stare as if they are speaking to you very plainly and telling you to fill the food bowl. Let’s talk about that stare. It’s pretty intense, as Maine Coons are very interested in whatever you’re doing, or whatever the dog is doing, or whatever the kids are doing. They’re like your own household foremen, showing up out of nowhere to happily supervise and chaperone any activity.

Although they’re not necessarily lap cats, Maine Coons like to be around their people, and they will tell you loudly when they need some attention. They certainly enjoy a long cuddle session several times a week, and will gladly sleep in the bed if you’ll let them. Families with children would do well with a Maine Coon cat because these creatures are very patient, even with toddlers.

You might think that dogs are the only animals in the house that have an intense desire to stick to a schedule, but the Maine Coon temperament is dog-like in nature, so Maine Coons have that same need for structure. They like knowing that feeding time is the same time every day, as well as playtime and bedtime, and even the time you come home. If you switch up the schedule, they’ll be sure to tell you about it.

Here’s one last insight to the quirky Maine Coon personality: They love water. Not to actually be immersed in it, but to drink it and lap it up from the shower after you’ve stepped out. They may also get as close as they can to the shower when you’re still in it, waiting just beyond the curtain for you to emerge. You should look into getting a running water fountain like the Cats Rule Frog Watering Hole Automatic Fresh Water Fountain or Drinkwell Pagoda Pet Fountain. And be sure to clean it regularly so the water is fresh.

You’ll want to brush a Maine Coon cat at least two or three times a week to remove loose undercoat hair—otherwise, your Maine Coon will end up matted, and you’ll be finding hairballs regularly around the house. Although they don’t need tons of grooming, they do need regular help getting rid of all the hair they shed. Safari’s Shed Magic De-Shedding Tool is great for penetrating the top coat to remove dead hair from the undercoat. When you brush your Maine Coon often, his coat will look sleek, smooth and beautiful. Be gentle and give him treats during grooming time. You want him to enjoy this time, because if he doesn’t, once again, he’ll let you know. Now, there’s a part of the necessary grooming ritual that won’t be so pleasant for you. We’re talking about taking care of the back side. Because the hairs around their tails are so long, Maine Coon cats tend to get poop stuck to them sometimes. So, your poor Maine Coon will need you to help him out by cutting off those pieces. But hey, it’s a small price to pay for having one of these amazing felines.

Because Maine Coon cats are so different from other cat breeds, they need to be fed a diet that addresses their specific needs. They have a wide, square-shaped jaw, so they can be fast eaters if there’s nothing to slow them down. Royal Canin’s Maine Coon Dry Cat Food is kibble that’s tailor-made for a Maine Coon’s large jaw and impressive teeth. The exclusive “Emerald 10” kibble is king-sized to encourage chewing with a unique, cylindrical shape. This dry food also has EPA and DHA for heart health and to help keep bones and joints strong. These omega fatty acids are also great for a Maine Coon’s beautiful fur. Royal Canin has also included plenty of amino acids and vitamins to help your Maine Coon cat maintain skin and coat health. For wet food lovers, there’s Royal Canin Maine Coon Canned Cat Food. It’s got all the same benefits of the dry version, but comes in thinly sliced morsels covered in gravy. Both have guaranteed levels of glucosamine and chondroitin—ingredients that this tall, heavy breed needs to support mobility without straining or overburdening their joints. You can even mix the two to give your big kitty a little variety.

Amidst all the unknown facts of the Maine Coon’s origin, one thing’s for certain—America’s ongoing love for this breed. Those who have been lucky enough to enjoy the company of a Maine Coon cat can tell you that living with one is never boring. They’ll “help” you with your chores, oversee your projects around the house, listen to all your stories with undivided attention, and settle in for a couch nap whenever you’re up for it. Who wouldn’t love these guys?

Nikki Naser, Pet Central Senior Editor
Instead of owning 30 cats, Nikki has an impressive collection of 30 cat-themed T-shirts, and just 4 pets—a ginger-haired senior cat, a senior Maine Coon, a middle-aged Choodle, and a young kitty who showed up one day on the back steps. A former Orlando resident, Nikki worked on several tourism publications before moving to South Beach. When she’s not stopping to take pics of community cats to post on Instagram, Nikki spends her time with the office pets at Chewy, writing for their Pet Central blog. 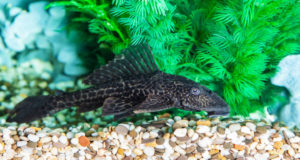 Avoid The Pleco Predicament
Choose your Plecos wisely. . . and don't expect them to clean all the algae in your tank
Up Next