BeWell / Wellness / Do Dogs Have Feelings?

Do Dogs Have Feelings?

Glancing up from an early draft of this very article, my eyes land on the tuft of white fuzz staring back at me from her customary roost at the top of my parents’ living room staircase. Throughout the past 15 years, I’ve taken pride in how I’m able to read Madison, our family’s West Highland Terrier, and my unmatched ability to determine—from her arsenal of barks, whines and gawky, tongue-askew expressions—whatever it is she might be thinking and feeling (more often than not, the hidden message has been “pet me”).

This year, however, has left me painfully aware of the distance between me and my longtime friend. She was diagnosed with lymphoma last fall, and has since kept her emotions close to the vest. Though I’ve witnessed an upswing in her physical comfort thanks to new medications, I still ache to know what’s going on inside of her. How she feels about all this.

Vexed by these questions for the first time in the decade and a half I’ve spent with Madison, I begin to wonder what a dog like mine might be able to think or feel. Further, I began to wonder how much of what I’m asking is just the wishful ascription of humanity to a creature that may be less human than many of us want to believe. Fortunately, at least some of my curiosities can be quelled by science.

Do Dogs Have Feelings?

“Emotions in dogs have been proven by quite a few studies,” says Christina Shusterich, dog behavior expert and owner of NY Clever K9 Inc. In fact, emotion seems to be just as influential on a dog’s temperament as it is on a human’s. The understanding of this emotionality is integral to Shusterich’s line of work.

“Ninety-nine-point-five percent of my business is treating behavior problems in dogs,” she says. “You have the right commands that physiologically calm a dog down, but the real solution is to get rid of the emotion that’s producing it.”

The sort of emotions that Shusterich regularly combats in canine clients include fear, aggression and panic, which she says dogs, “are constantly communicating with their body language: their facial expressions, their eyes, and vocally.”

I still ache to know what’s going on inside of her. How she feels about all this.

Shusterich commonly employs her own voice to help the dogs she works with feel more comfortable emotionally, and while it should shock nobody that a well-trained pooch is apt to respond to vocal commands, Shusterich goes on to illustrate dogs’ surprisingly empathetic appreciation of some of our own favorite feelings.

“When I’m working with dogs to change their emotions, it’s not enough to be happy—I try to produce joy in a dog,” she says. “The way I do it is with praise. Because that’s what makes a dog’s tail wag, not pummeling treats in their mouths.”

Perhaps even more surprising is what you might be so bold as to call as dog’s sense of humor. “I don’t want to teach people to anthropomorphize more than they already do with dogs, but there are ways to make dogs ‘laugh,’” she says. “If I act very, silly, that’ll produce a joy that’s greater in a dog than just wagging their tail. When you’re acting goofier—maybe you’re running around in the yard or you’re playing fetch—there’s a higher level of happiness.”

As we talk, Shusterich punctuates her explanations with comments like, “I’m sure you’ve seen this with your dog.” In earnest, I cannot remember telling her that I’ve got a dog of my own—perhaps I did instinctively, or perhaps she, correctly, assumes anyone with as much interest in canine behavior as to conduct such an interview must be a pet owner. Whenever she says this, my mind rolls back through one memory or another of playing with Madison (not fetch—to my understanding, she always felt the game a bit pedestrian). Each time, I wonder how much better a job I could have done keeping my dog overjoyed.

Just as familiar are experiences on the opposite end of the spectrum, and dogs are indeed capable of more sophisticated grievances than the aforementioned fear, aggression and panic, which can be written-off (to some extent) as primal. A dog experiencing sorrow, for example, can be rooted in what seems very much like empathy.

“I had a dog that was at Ground Zero during 9/11, and my husband is a retired police officer,” says Shari Forst, a board-certified companion animal behavior counselor and co-proprietor of Canine Case Squad, Inc. “Because they weren’t finding survivors, the search-and-rescue dogs were getting depressed. So the rescue workers actually had to hide so the dogs could find them, so they could have their spirits rejuvenated.”

Similarly to people, dogs can experience emotional disorders, says Dr. Mary Burch, certified applied animal behaviorist (CAAB) and director of the American Kennel Club’s Canine Good Citizen Program. “An estimated five percent of dogs returning from war zones have PTSD [and] will often shut down and refuse to work,” she said. “The treatment for these dogs usually involves medication and/or behavioral programming, depending on the severity of the problem.”

“Because they weren’t finding survivors, the search-and-rescue dogs were getting depressed. So the rescue workers actually had to hide so the dogs could find them, so they could have their spirits rejuvenated.”

Though Madison would have never made it through the academy, she’s known her share of emotional hiccups. I’m reminded of her early bouts with separation anxiety when I speak to CAAB Dr. Peter Borchelt, who discusses the common practice of diagnosing an anxious or depressed dog with Prozac or Zoloft—medications also used by people.

“When [Prozac] first came out, the first papers were on dogs with what are called lick granuloma [hot spots]. Wounds that they would lick as a way of providing some comfort from what might be pain or discomfort,” he says. “Prozac stopped that pretty quickly. So we assume that was sort of an anxiety-type of response.”

Do Dogs Have the Same Emotions as People?

Clearly, our modern affinity for dogs is not arbitrary. Borchelt says that it’s practically hard-wired, joking that, other than parasites and viruses, the dog is the one animal that has evolved with us the closest.

That said, Borchelt says that we should use caution when attributing human sentiments to animals. Sometimes, we are wont to go overboard. Shusterich sees one such phenomenon rather frequently when dogs are fearful.

“Their ears will slick back and they make their bodies smaller. There’ll be a lot of tension in their face. And people consistently confuse that with guilt,” she says, adding that pet parents persistently project remorse onto dogs for “misbehaviors” like going to the bathroom in the house.

Shusterich agrees with neuropsychological researcher Dr. Stanley Coren’s assessment that dogs are not actually capable of guilt, pride or shame, and also adds spite—one that I, myself, am embarrassed to have attributed to Madison from time to time—to the list of human emotions dogs do not experience. Still, this shouldn’t deter us from believing in the genuine “humanity” that does exist within our furry friends.

“[When] dogs and their owners look into each other’s eyes with soft eye contact, it releases oxytocin. The love hormone,” Forst says. “It’s the same hormone that parents feel with a newborn baby, that adults feel when they first connect with somebody and fall in love […] our dogs have the same thing.”

In answering the big question about what an animal does and doesn’t feel, all the immutable science in the world plays second fiddle to the indescribable bond you share with your own dog, your own best friend.

I may have misread plenty of Madison’s barks over the years—no, she probably wasn’t judging me the other day for marathoning New Girl instead of catching up on my reading. And I may not be able to glean as great an insight as I’d like into how she feels about her current state of being. If I’m being honest, I may not even know for sure how she’s felt about me and the time we’ve spent together.

But as my eyes meet those of the chubby white puff perched comfortably at the top of he living room steps, I’m drawn through all the memories, good and bad, that we’ve shared over the past 15 years. I do know that she’s felt some of that. And I’m also pretty sure she wants to be pet. 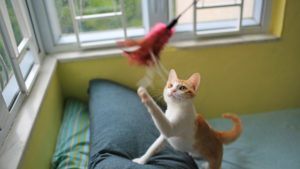 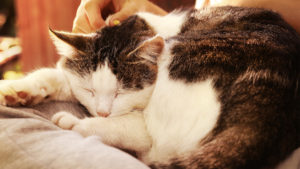 Could Your Pet Stand to Lose a Few?
Follow these weight management tips to help with pet weight loss for your overweight dog or cat.