BeWell / Wellness / A Scientific Look at How Dogs Drink Water

A Scientific Look at How Dogs Drink Water

You might not look at your dog slurping and gulping water into his throat (and all over your floor) as an engineering marvel. But you might want to look again.

A study out of Virginia Tech on the mechanics of dogs drinking water shows that what looks like a sloppy mess to us, is actually quite an interesting and complicated feat.

Cats and dogs both have incomplete cheeks, which is something all predatory animals have in common. This is because, as predators, they need to be able to open their mouths extra wide to kill their prey. A dog’s lips go all the way around the mouth. As a result, they are unable to purse their lips and use their cheek muscles to make a vacuum in the mouth to draw water into the mouth. Sadly, no straws for dogs!

The Difference Between Cat and Dog Drinking

“Dogs curl their tongues backward, shaping like a ladle,” says lead researcher Dr. Sunghwan Jung, assistant Professor of Biomedical Engineering and Mechanics at Virginia Tech. “Then, their tongues will scoop some water and also create a column of water beneath. Dogs bite and drink a portion of this water column, but scooped water will fall back to the bath.” Hence, all the splashing.

“All breeds of dogs drink the same way, but their anatomy plays a role in how messy they are when they drink,” says Dr. Gaylord Brown, the in-house veterinarian at Delta Rescue in Glendale, Cali. “A large, heavy jowled dog will, by his anatomy, have more drool than a Chihuahua. However, the actual drinking process is the same.”

How to Handle the Mess

So what can a dog owner do about all that mess? Not much, as it turns out, says Dr. Brown. We need to just buy larger mats.

“Place the water bowl or pet fountain in the center of an easily cleaned and absorbent mat, especially if the dog drinks indoors—also keep those toilet lids down or you will get a cold surprise,” Dr. Brown says. Even so, don’t expect miracles. “The dog can no more control the amount of spillage than a leopard can control his spots.”

How Much Should a Dog Drink?

As for how much a dog should be drinking per day, a lot of that depends on his level of activity as well as the kind of food he eats, says Dr. Brown. “A dog should have about one ounce of water per pound of body weight per day,” he says. “This varies with temperature, activity and diet. Those dogs who eat canned food only will tend to drink less because the canned food is up to 70 percent water. In the heat, water consumption can triple, due to panting for temperature control. Similarly, exercise can triple or quadruple the water need, depending on the length of exercise and the temperature.”

The most important thing to remember is never to let your dog dehydrate. “Water is an important part of cooling the dog’s body,” says Dr. Brown. “Without water every major organ would soon stop functioning and the dog would die.” So everything in our dog’s amazing anatomy is designed to make sure that doesn’t happen.

Cat Behavior After Spaying
Learn about what behaviors to expect from your cat after she is spayed.
Up Next 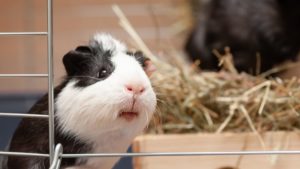 Dangers Of Spaying Guinea Pigs
All surgeries have risk, so do the benefits of spaying a guinea pig outweigh the risk of surgery?