A tail can tell us so many things.

“Everyone has an image of a super friendly dog wagging his tail so hard he looks as though he might be able to take flight,” says Dr. Karyn Collier, DVM, Chief Medical Officer at Saint Francis Veterinary Center. “In this instance the message is clear—that dog is happy.”

There are times, though, Dr. Collier continued, where the message isn’t quite so obvious. “Especially when it comes to cats, tail posture and movement are not quite as easy to interpret,” she said. “They are still, however, sending a message.”

So just what does it mean when Penny’s tail starts thumping the second I begin to pet her? I was eager to find out…

“Behaviorists have logged many hours of research observing cats’ posture and body language during their interactions, both with other cats and with dogs,” says Dr. Collier. “The facial expression, position of the ears and the tail can tell a great deal about the state of mind of the cat. Although the tail position will be discussed, tail position is not relied upon as a single indicator of the cat’s state of mind.”

A cat that is holding its tail lower, extended rigidly and is flicking it back and forth is showing signs of offensive aggression. “This is not a happy cat,” says Dr. Collier. “This is encountered frequently during veterinary visits. The cat that is flicking its tail on the exam room table is letting everyone know it does not want to be there.”

In contrast, a cat that is relaxed and simply surveying the environment may also have the tail lowered, but will leisurely move it and is generally much more content.

A cat that is holding its tail in an upright, vertical position can be considered in a playful mood, and it might be a good idea to whip out some cat toys. “There may be motion back and forth that constitutes a greeting,” says Dr. Collier. “That cat is open to interaction.”

Other times, that upright tail that is quivering back and forth in a cat that has backed up to the wall or furniture could actually be spraying or urine marking. “And yes, female cats spray urine as well as male cats,” Dr. Collier confirms. “A tail that is held upright, but concave, is more of a defensive position or defensive aggression. That cat does not want to interact.”

And of course, a cat with her tail tucked between her legs is showing submission or fear.

Arched back. Pinned ears. Erect tail. “This cat is ready to react in either a defensive or offensive manner,” says Dr. Collier. “It will do whatever it deems is necessary, and is signaling to the other parties that he or she is ready to react.”

The takeaway? “Cats are very expressive creatures, and often use their body posture, the position of their ears, their facial expression and the position and movement of their tails to convey their feelings and intentions,” says Dr. Collier. “Unlike the aforementioned dog who is frantically wagging his tail, if a cat is ‘wagging’ his tail back and forth, it is very unlikely that the emotion he or she is expressing is joy.”

How to Teach Your Dog to Stand Up Paddle Board
If you want to hit the sea with your dog and stand up paddle board, there are some things to keep in mind. Here's how to teach your dog to paddle board.
Up Next 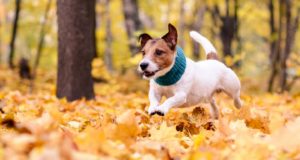