BeWell / Wellness / 10 Tips To Teach Your Pet Parrot To Talk

10 Tips To Teach Your Pet Parrot To Talk

All of the parrot species have the anatomy required to imitate human speech, or “talk.” This is one of the attributes that makes parrots alluring to people and certainly sets them apart from other companion animal species. While all the parrots can talk in theory, some are better mimics than others and some species are more likely to talk. Some of our parrots have an “accent” or talk in mechanical, especially fast or barely intelligible speech. If you have a female cockatiel or budgie/parakeet, it’s very unlikely your pet bird will talk at all.

Here are some ideas about teaching your pet bird to talk.

1. Will your pet bird learn to talk?

Lories are great talkers, if you can supply them with their nectar diet. The African Poicephalus parrots, like the Senegal and Meyer’s, can learn to talk, though their voices are not easy to understand. The same is true of the Pionus parrots, of which the Maximillian’s Pionus talks most clearly. I have known caiques that talked well. Some of the grass parakeets can talk, and the male budgie can learn literally hundreds of words. Male cockatiels can learn a few words, especially while they are still young.

Any of these parrots may talk, or they may not talk at all. I have known practically silent greys and sometimes pet sit for a Moluccan cockatoo that is unusually verbal. With our parrots, talking ability is a bonus not a given. It’s worth working with your pet bird on its talking ability. Keep in mind that even a non-talking pet bird can communicate and can understand your words.

Your pet bird may learn to talk. It is most likely to learn to talk from you. Studies done in the ’90s on wild bird vocalizations showed that young birds learned a flock language from other birds after they left the nest. In our homes, we become a pet bird’s flock, and the vocalizations it learns might therefore include our language, just as it would learn a flock language in the wild.

Social interaction is required for a pet bird to learn to talk. You won’t have much success just leaving media playing with repeated phrases. Your pet bird will learn words you say to it, especially if the words involve food, a bath, your presence or are said enthusiastically.

2. What are some easy words/phrases for most pet birds to learn?

Pet birds learn words associated with things they want most readily. Name foods you feed your pet bird, for example. Start teaching it the difference between “banana,” “apple” and “orange” or between “seed” and “nut.” You can do this with your pet bird even if it does not answer. My Pionus reacts when I say “nut,” a favorite treat. When your pet bird starts making a sound or intonation remotely like one of these words, give it the food item as a reward and say the word you think it is saying.

You can also associate words with your actions. Say “Hello” and “good-bye” as you enter and exit the house. pet birds like company, and will quickly learn “hello,” “come in,” and “what are you doin’?” used when you first enter a room. Say “good-bye” every time you leave, and also use the same words when you cover the cage each night. Say “night, night,” “good night” or “bed time” for example. Chances are your pet bird will pick up those phrases.

3. Should you say different words to your pet bird to see which one it picks up, or should you repeat the same word/phrase every day and then move on to another word/phrase a week or two later if it doesn’t take? Is there a certain way to say the word/phrase: Should you say it low and slow or loud and proud?

Parrots also learn words that you say enthusiastically very easily, that’s why a pet bird may repeat an exclamation or foul language after hearing it only once, while ignoring the polite word you are trying to teach it. It’s amazing how many pet birds can say “shut up,” “be quiet” or “ouch.” You can learn two things from this: a) Watch your language around your pet bird! It’s likely to pick up phrases from you, whether you are teaching them to it on purpose or not; b) When you want a pet bird to learn to say something, say it with enthusiasm, loudly, excitedly and in a high voice. Vary your voice, but use the same word. This makes learning to say “grape” very exciting and memorable!

4. How can you tell if it is chatter or if your pet bird is really saying something?

When a pet bird is first learning a new word or phrase, it generally doesn’t speak clearly. Get excited when a pet bird appears to be imitating something you’re saying by saying it back to the pet bird. First mutterings are just that, mutterings or whistles with an inflection like speech, or mumbling that is inflected like speech even though the words aren’t clear.

The woman whose parakeet Puck was the most talking pet bird in the “Guinness Book of Records” in 1995 actually recorded her parakeet’s chatter and slowed it down to hear the words it said. Parakeets generally talk in a high pitch and very fast. What you take to be a budgie’s chatter could actually be words. Listen carefully and consider recording and slowing down its speech.

5. Can one pet bird teach another a word/phrase?

Pet birds learn from each other. In the wild a bird would be learning the flock language from its flock-mates. In our homes, flock-mates are as varied as the family dog, you and your housemates or family, and the other pet birds in the household. Pet birds can learn to tell each other to be quiet, to greet each other by name … or to all use the same name! I once had a flock of cockatiels in which the males all learned to say “Jonesy’s a pretty bird” because Jonesy knew how to say that.

6. Is it better to try to teach a pet bird to talk while it is in its cage, or should you put it on a playgym or hold it?

If you are going to teach your pet bird a vocalization as a learned behavior, with no relation to an action or reward, then choose a quiet place in which to work and put your pet bird on a T-stand. Keep distractions to a minimum. Repeat a phrase like “pretty bird” several times and reward your pet bird for any vocalization, then eventually for the correct one.

If you are teaching a pet bird to say hello, good-bye or to name a treat, then your pet bird could be in its bird cage or on a stand. If a pet bird learns to name a food like “nut” or “seed” or “apple,” be sure to reward it with the appropriate food.

7. Are certain times of the day better to work with a pet bird on its vocabulary? (Is the morning better than the afternoon?)

It’s fine to work with your pet bird any time of day, and several times a day as a matter of fact. Get in the habit of talking to your pet bird as though it’s a young child. Talk about what is going on and what you’re doing, and especially talk about things that interest your pet bird.

8. Can a pet bird “lose” a word/phrase if it’s not reinforced enough … will your pet bird forget it if you don’t repeat it?

Trainers call the process of a behavior disappearing “extinction.” If a behavior, like saying a word, is not reinforced, then it usually goes away. Your pet pet bird could forget a word or phrase if you do not react to it and if you stop saying it yourself. On the other hand, birds do seem to have long memories. If you want an old phrase back, you could help your pet bird to remember it.

9. How do you get a pet bird to start a new word/phrase if it constantly says the same thing over and over?

You can promote the extinction of the worn-out phrase by not reacting to it. Don’t look at the pet bird, respond verbally to it or repeat the phrase. Try to add a word by responding with a new word every time your pet bird says the old one. You could start whispering another word, which many pet birds find rather irresistible, or you could start a duet with your pet bird. Birds are musical and duet in the wild. Let your pet bird take one part, and sing another word till it gets into the repertoire.

And once again, naming things for your pet bird is a good way to add a word to its vocabulary.

10. Does the pet bird need to be tame in order to learn to repeat words/phrases?

The wonderful thing about talking is that it is an experience you can share with your parrot no matter what level of tameness it is. Parrots are vocal and social. Use those traits to start interacting in a positive way with an untamed parrot. It will probably make you feel better about your pet bird. Talk across the room, name treats for it and talk to it as you enter and exit the room. Singing with your parrot doesn’t require tameness. Of course, it doesn’t hurt if you have a musical voice!

Do both male and female budgies talk?

Only male budgies are likely to talk. Even when a pet bird does not talk, it may understand what you say. Talk to your female budgie and as she responds appropriately reward her. A male budgie’s repertoire can be huge. Puck, a budgie listed as the most talking bird in the “Guinness World Records,” said 1,770 words.

Do both male and female cockatiels talk?

It is male cockatiels that learn to whistle and talk. As a general rule, teaching a female cockatiel to talk is unlikely. Instead, teach her tricks or teach her to respond in other ways.

If a cockatiel loves to whistle does that make it more likely to talk … or less likely?

Vocalization and talking are linked. It’s the loud parrots that talk the best, and the vocal (male) cockatiels that whistle readily are good candidates for talking. My experience has been that male cockatiels learn a few words or phrases till they are about two years old, then don’t add to their repertoire after that. Prove me wrong and tell me about it!

Can you teach a budgie to speak more clearly?

A budgie’s talk will get clearer as it becomes sure of its words, up to the limits of its ability. At first its words will be mumbled, but if you have an idea what it is saying, or what you want it to be saying, and repeat that phrase when you hear your budgie talking, it should start to be intelligible.

Increasing The Bond Between Guinea Pigs And Owners
Pet Central gives you tips for how to bond with your guinea pig.
Up Next 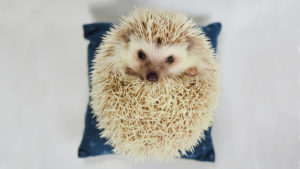 12 Strange But Common Hedgehog Behaviors And Facts
Pet Central explores some of the stranger but common behaviors of hedgehogs.