Home / BeWell / Which Plants Are Poisonous to Cats? A Complete Guide

Which Plants Are Poisonous to Cats? A Complete Guide

All cat parents should know the most common plants that are poisonous to cats. Whether in your yard or in your home, you’ll want to keep certain plants and flowers away from your feline companions. The toxicity of various plants and flowers can range from mild to severe, depending on the poisonous component of the plant.

More than 11,000 calls to the ASPCA’s Animal Poison Control Center were logged about plants in 2018, according to Tina Wismer, DVM, DABVT, DABT, the center’s medical director. Plants that are poisonous to cats made up 3,675, or about a third, of those calls.

“It is best to familiarize yourself with the list of toxic plants and keep these types of plants out of your home or garden for the health and safety of your pet,” Dr. Wismer says. “For indoor plants, cats are likely to ingest the plants. Make sure to keep all plants out of paws’ reach. Cats are good climbers, so it’s best to move plants to a safe place they cannot access and don’t underestimate their ability to get at things that are high up.”

One plant that is extremely dangerous to cats is the lily.

Dr. Osborne once treated a very sick cat who, as it turned out, had ingested a lily. The cat was hospitalized, treated with intravenous fluids and given supportive care to restore her kidney function. Because the cat’s parent took her in right away, she survived her dangerous encounter with the lily plant—and the parent learned a valuable lesson: “Cats and plants don’t really mix,” Dr. Osborne says.

So, what plants should cat parents be on the lookout to avoid? Start with this list of plants that are poisonous to cats, which rounds up the varieties you and your feline are most likely to encounter.

The autumn crocus (Colchicum autumnale), also known as meadow saffron or naked lady, is a common ornamental flowering plant that blooms in the fall. Autumn crocus is poisonous to dogs, cats and horses, according to the ASPCA Animal Poison Control Center. It’s especially toxic to cats because of its alkaloid colchicine content, according to the Pet Poison Helpline. All parts of the plant are highly toxic.

According to the Pet Poison Helpline, cats that ingest autumn crocus may show gastrointestinal signs (for instance, drooling, vomiting and bloody diarrhea), breathing difficulties, seizures, kidney and liver damage, and even death. Symptoms might be evident shortly after ingestion or could take days to show up.

Azaleas and rhododendrons (Rhododendron spp.) are related species of flowering shrubs and small trees that are toxic to cats. There are more than 1,000 species in this family of plants, and the degree of toxicity varies from moderate to severe, according to the Pet Poison Helpline. The toxic component is called grayanotoxins. All parts of the plant are toxic and a cat can become poisoned by ingesting a tiny amount of the plant.

Symptoms of azalea or rhododendron poisoning, according to the ASPCA Animal Poison Control Center, include gastrointestinal signs (drooling, vomiting, diarrhea, lack of appetite), heart arrhythmias, weakness, tremors, transient blindness, seizures, coma, and death). If you have this species in your yard, don’t allow your cat to come into contact with it, and avoid bringing flowers or plant clippings into the house.

Cyclamen (Cyclamen spp.), also known as Persian violet and sowbread, is a genus of more than 20 species of perennial flowering plants that are often kept indoors. The tubers and roots are the most toxic, but all parts of the plant contain the toxic component, saponins, according to the Pet Poison Helpline.

According to the ASPCA Animal Poison Control Center, signs of cyclamen toxicity involving small amounts of the plant include drooling, vomiting and diarrhea. If a cat ingests large quantities of cyclamen, it can experience abnormal heart rate and rhythm, seizures and death. Cat parents should not keep this houseplant indoors.

Most plants that fall into the genus Narcissus, including daffodils (also called jonquil, paper white or Narcissus), are flowering spring perennials. All parts of the plant contain the poisonous agent lycorine, but the bulbs are the most toxic, according to the Pet Poison Helpline.

Lycorine causes drooling, vomiting, diarrhea and abdominal pain. In some cases, cats who ingest daffodils and other plants in the Narcissus genus experience cardiac arrhythmias, extremely low blood pressure, breathing difficulties and convulsions, according to the ASPCA Animal Poison Control Center. Cat parents should not keep daffodils or related plants in the house, and should not plant daffodils in the yard if the cat has access. Gardeners must take care to keep daffodil bulbs away from cats.

This common houseplant contains insoluble calcium oxalate crystals, which cause oral irritation (burning feeling in the mouth, drooling, vomiting, difficulty swallowing), according to the Pet Poison Helpline. Although generally not deadly, exposure to this plant is painful and extremely uncomfortable for cats, so these plants should not be kept in homes with cats.

All parts of this plant contain toxins called bufadienolides, which generally cause gastrointestinal signs (drooling, vomiting and diarrhea), according to the ASPCA Animal Poison Control Center. Rarely, if cats ingest large quantities of kalanchoe, they might experience more severe symptoms, including heart arrhythmias, collapse and seizures, according to the Pet Poison Helpline. Cat owners should not keep this plant in the home.

“Easter lilies are very dangerous for cats; ingestion of any part of the plant, or even the pollen, can cause kidney failure,” Dr. Wismer says.

Cats need only ingest a tiny bit of the aforementioned lilies (for instance, chewing on one or two petals or leaves) to take in enough toxin to cause death. Even just licking the pollen from the flowers or drinking water from the vase of lilies can spell death for a cat, Dr. Wismer says.

If you suspect that your cat may have come into contact with a lily, contact your veterinarian or poison control immediately. Do not wait, as prompt treatment can mean the difference between life and death. Cat owners should never keep lilies in the house, Dr. Wismer says—the risk is too high.

Symptoms include drooling, vomiting, diarrhea, incoordination, tremors, seizures and fatal heart abnormalities. All parts of the oleander plant are toxic, including the water in the vase of these flowers, according to the Pet Poison Helpline. Cat parents should not keep oleander in the yard and should not bring the flowers into the home.

Sago palm (Cycas revoluta), also known as coontie palm, cardboard palm, cycads and zamias, is a common plant found outdoors in tropical/subtropical areas. Certain sago palms are also kept as houseplants. All parts of the sago palm plant are toxic, but the seeds are the deadliest, according to the Pet Poison Helpline. The main toxic compound is cycasin, the ASPCA says, which causes severe liver damage.

Symptoms of sago palm poisoning in cats, according to the Pet Poison Helpline, include vomiting and diarrhea; black, tarry-looking stool; bruising; increased thirst; lethargy; liver failure; and death. If you suspect your cat has chewed on any part of a sago palm, seek immediate treatment. Even with quick and aggressive veterinary treatment, the prognosis for survival is only 50 percent, according to the Pet Poison Helpline website.

Popular in bouquets and gardens, tulips (Tulipa spp.) and hyacinths (Hyacinthus orientalis) are both part of the Liliaceae family, which also includes the deadly lily species. Tulips contain tulipalin A and tulipalin B and hyacinths contain possibly narcissus-like alkaloids, according to the ASPCA Animal Poison Control Center.

Although all parts of the plants and flowers contain the dangerous compounds, they are most concentrated in the bulbs, according to the Pet Poison Helpline, which states that signs of tulip of hyacinth poisoning include drooling, vomiting, diarrhea, depression and tremors. 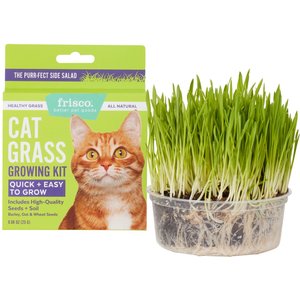 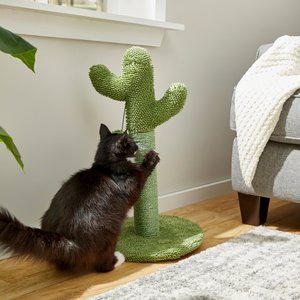 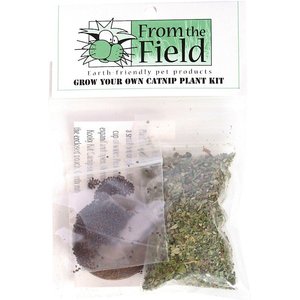 From The Field Grow Your Own Catnip Plant Kit
$5.92
Shop Now!

Some plants may not be deadly, but can cause stomach upset if ingested. It can be difficult to keep cats away from plants since most cats go wherever they can, including on countertops and window ledges. Gary Weitzman, DVM, president and CEO of the San Diego Humane Society and author of the 2019 book “National Geographic Complete Guide to Pet Health, Behavior, and Happiness: The Veterinarian's Approach to At-Home Animal Care,” suggests elevating plants whenever possible.

“Whether indoors or outdoors, putting your plants in containers or large planters will elevate them so your pets can’t access them to dig or chew on them,” Dr. Weitzman says. “Hanging planters are a great option as well.”

If you suspect your cat has ingested any part of a plant that’s poisonous to cats, even just chewing or licking the leaves or flowers, take immediate action, Dr. Weitzman says.

Call your veterinarian or an animal poison control hotline quickly. Two animal poison hotlines that are available 24 hours a day, seven days a week are the ASPCA Animal Poison Control Center at 888-426-4435 (consultation fee may apply) and the Pet Poison Helpline at 855-764-7661 ($59 consultation fee applies).

If possible, Dr. Weitzman says, take photos of the plant in question and bring a sample with you to the veterinarian. “You’ll also need to provide information, if you know it, about the amount ingested and the time since exposure,” he says.

Unfortunately, a lot of times cats nibble on plants without their parents’ knowledge. In the case of the cat who ingested the toxic lily, her parent at first was not aware that the cat had eaten a toxic plant.

“The cat owner had no idea that the cat ate a lily. She just knew that the cat stopped eating and was hiding in a corner,” Dr. Osborne says.

After the cat’s parent had answered a lot of questions, she went home and realized that some of the little pebbles and dirt from the lily plant’s pot had spilled onto one of her tables.

“That’s how we put two and two together,” Dr. Osborne says. “Being able to nail it down to a particular plant is great when you can, but I think it’s somewhat rare.”

This story illustrates why it’s so important to seek immediate veterinarian care any time your cat is acting sick. The sooner you get your cat to a veterinarian for treatment, the better the outcome.

Hundreds of plants and flowers are toxic to cats. The toxicity of plants can range from mild to severe. The following list of plants poisonous to cats is not exhaustive, but includes many varieties that can harm your cat, according to the ASPCA: